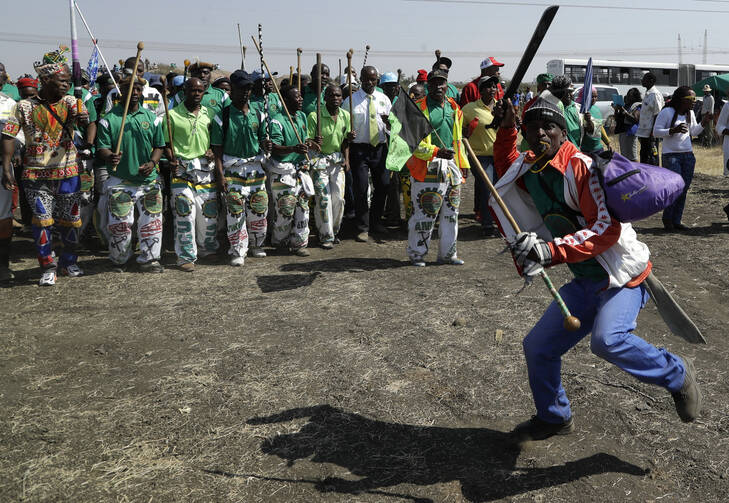 Mine workers sing during the commemoration ceremonies in Marikana, South Africa, on Aug. 16, 2017. Protestors complain that no one has been punished and conditions have not improved since Aug. 16, 2012, when police opened fire on workers demanding wage increases and better living conditions. (AP Photo/Themba Hadebe)

Many South Africans believed that the United States is different from their own nation—that it had put its struggles with racism behind it—until Charlottesville happened, and people on the tip of the African continent realized that the United States, like South Africa, continues to battle the terrible scourge of racism, something made even more difficult when both nations struggle under questionable leadership.

Racism is still part of the fabric of South African society. Despite the fall of apartheid in 1994 and the reconciliatory tone set by the country’s first democratically elected president, Nelson Mandela, the demon is very much alive here, and high-profile incidents of racism seem to be on the rise.

As scenes of white nationalists in Charlottesville, Va., were broadcast to the world, the trial of two South Africans, in what has been dubbed the “coffin assault case,” was coming to an end. Two white farmers, Willem Oosthuizen and Theo Jackson, were accused of forcing a black man, Victor Mlotshwa, into a coffin and threatening to douse it with petrol and burn him alive. They also threatened to put a snake in the coffin with Mr. Mlotshwa when he resisted.

Racism is still part of the fabric of South African society, and high-profile incidents of racism seem to be on the rise.

They said they did this to “teach him a lesson for trespassing on their farm.” Mr. Mlotshwa only reported the case to the police when a 20-second video of the assault was circulated on social media. The incident reportedly took place on Aug. 17, 2016.

This past Aug. 25, the High Court in Middleburg handed down its judgment. Judge Sheila Mphahlele found the duo guilty of intimidation, assault with the intent to do grievous bodily harm and attempted murder. The two men will be sentenced on Oct. 23.

Mr. Oosthuizen and Mr. Jackson were arrested only after outrage over the viral video rose, and they were released after posting bail of less than $100. Even more disturbing, their lawyer claimed that the two men never considered what they did to Mr. Mlotshwa as “wrong.”

South Africa was also rocked by another violent racial assault after another video went viral a few weeks ago. This time it was a video of five white men assaulting a black couple at a Kentucky Fried Chicken outlet on Aug. 3.

The country’s minister of police, Fikile Mbalula, described the incident on Twitter as a racially motivated attack. The perpetrators were arrested and charged with attempted murder, assault with the intent to do grievous bodily harm and pointing a firearm. They have denied it was a racial incident, claiming that the black couple “had [a] bad attitude.”

A local police officer said that in the north of Pretoria, where this incident took place, there is an average of eight to 10 such reported cases every month. The area is still considered to be an enclave of conservative white Afrikaners.

Some South Africans are worried that the events in the United States like Charlottesville will embolden white nationalists here. South Africa is still in a fragile state when it comes to race relations. There is a growing tension across the country as more incidents of racially motivated attacks come to light.

The South African police, not unlike some police departments in the United States, have a reputation for brutality when it comes to dealing with black lives. South Africa only recently marked the fifth anniversary of what is now known as the Marikana Massacre, when police opened fire on striking black miners, killing 34 in a mining community in the country’s northwest platinum belt.

That bloodshed represented the single most lethal show of force by police in South Africa’s democratic era, and though the minister of police was suspended in its aftermath, no police have been held accountable for the miners’ deaths.

The Southern African Catholic Bishops’ Conference spent two days of their midyear plenary in August reflecting on racial injustice in the church and in the country. And in May 2016, the bishops issued a pastoral letter asking for a “candid conversation on racism and its manifestations in order to adequately and seriously address racism and racial divisions in our country.”

“We realize that this is not an easy conversation, one that many of us may prefer to avoid. Our invitation to such a dialogue may in itself evoke a range of emotions, including self-justification and self-righteous feelings; or, guilt and denial; on the other hand, feelings of anger and sadness. Dialogue, rational and respectful, is necessary so that we open ourselves to receive God’s healing.”

The S.A.C.B.C. has tasked its Justice and Peace Commission of the Conference to develop practical ways for parishes to address issues of race from within.

Political leaders in South Africa have been known to use race for gain. Embattled President Jacob Zuma has claimed racism as the motivation for a series of protest marches against him. Many South Africans, across color lines, are unhappy with his leadership and with an increasing gap between the rich and poor, but Mr. Zuma has said the marches demonstrate that “racism is real and exists in our country” and that “some of our white compatriots regard black people as being lesser human beings.”

It is true that there are still white people in South Africa who regard black people as inferior, but Mr. Zuma has done little to find a way forward. Like President Trump, he seems incapable of rising above his own ego and putting the national interest first.

In 2016, the South African bishops conference proposed that the country needs to deal with the social trauma that resulted from colonialism and the violence of apartheid. It said that South Africans need to acknowledge the link between race, power and privilege and call for an urgent redress of the economic inequalities in the country that are a direct result of racially discriminatory laws and practices. Sadly, this message has not reached parish communities or become part of the national narrative.

The United States and South Africa have much in common, including an “expanding frontier” mythology expounded in the United States by scholars like Frederick Jackson Turner and in South Africa by numerous historians of the “Great Trek,” the early 19th century migration of Dutch-speaking colonists into the interior of southern Africa. Both countries resisted British colonial rule and are marked by a history of slavery, wars against indigenous peoples and civil war.

More recently, both countries experienced unpopular wars in foreign countries—in Vietnam and Namibia (which, ironically, South African soldiers used to call “Nam”). Both countries now have heads of state who spend more time embattled in their own messy politics than serving their people.

Both nations, on a more positive note, have experienced largely nonviolent struggles for the civil rights of disenfranchised segments of their populations; at times, they drew inspiration from each other. In more recent times one might draw parallels between the struggles of women and sexual minorities for greater freedom and equality, with liberties won in law offset by a comparable social backlash.

Sadly, today it seems the United States and South Africa have a few other things in common: the ugly underbelly of a persistent racism and leadership that does not appear up to the task of confronting it.

Yes, my America still has a long way to go to be truly egalitarian. In our defense, we have come a long long way. White Americans sacrificed and died to bring increased freedom to people of all races - from before our Civil War through the Civil Rights era, etc. America wrote the Bill of Rights as a part of our founding Constitution - what other country has done as much?

I have traveled in Europe and have worked with many Russians. I have lived in Hawaii, around many Oriental people from many backgrounds. We are all imperfect and we all sin. In Africa, the conflict between various ethnic groups is well known. We have to realize that political and ethnic murders can occur in even places like Norway. I have worked with many Japanese and have great respect for them, but they are intolerant of their own ethnic minorities such as Koreans and the Ainu.

Good luck, Africa! Good luck to us all.