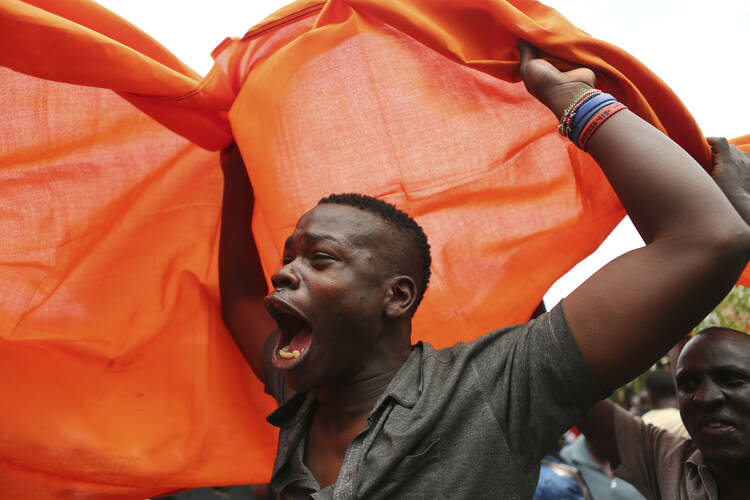 On Sept. 1, Kenya’s Supreme Court annulled the result of the country’s recent presidential elections, held on Aug. 8. The court ruled that there were irregularities and that a new election is to be held within 60 days. The country’s electoral commission had already declared incumbent President Uhuru Kenyatta the winner of last month’s election, with 54.3 percent of the vote in a contest were nearly 80 percent of Kenya’s 19 million registered voters were said to have cast ballots. But opposition leader Raila Odinga objected to the result and said that there had been electronic voter theft.

Many local and international observers—including South Africa’s former President, Thabo Mbeki, and former U.S. Secretary of State, John Kerry—have said that they were satisfied with the result and that the elections were basically free and fair.

Mr. Kerry, heading the Carter Center’s observer mission, said, “Kenya has made a remarkable statement to Africa and the world about its democracy and the character of that democracy. Don’t let anybody besmirch that.” Mr. Mbeki, who headed the African Union’s observer mission, echoed these sentiments, saying, “It would be very regrettable if anything emerges afterwards that sought to corrupt the outcome, to spoil that outcome.” And the European Observer Mission said that they had not observed any signs of “centralized or localized manipulation” of the vote.

Many local and international observers have said that they were satisfied with the result and that the elections were basically free and fair.

After the election Mr. Kenyatta’s supporters headed to the streets to celebrate. There were, however, outbreaks of violence as opposition supporters protested the result. Kenya’s police are still investigating at least 28 election-related deaths.

In 2007, widespread violence broke out after another disputed election. About 1,200 people were killed, and hundreds of others were displaced as the protests led to ethnic killings. There was also violence during the 2013 election.

The 55-year-old Mr. Kenyatta tried to extend an olive branch to the opposition after his re-election. “To my worthy competitor Raila Odinga, I reach out to you, I reach out to your supporters. Let us work together. Let us be peaceful, let us share together. Reach out to your neighbor, shake their hand. Say this election is over, let us move on,” he said shortly after being declared the winner.

The opposition was, however, unhappy. Mr. Odinga, 72, brought the case before the Kenyan Supreme Court. He claimed that the electoral commission’s IT system had been hacked and that the results were fixed. There was also doubt about the counting process because the official in charge of voting technology, Christopher Chege Msando, was murdered about a week before the election.

There was doubt about the counting process because the official in charge of voting technology was murdered about a week before the election.

In his ruling, Kenya’s Chief Justice, David Maraga, said that the elections had not been “conducted in accordance with the constitution” and therefore was “null and void.” Four of the high court’s six judges ruled that the vote had been marred by irregularities that had harmed the integrity of the election. The two dissenting judges were given the opportunity to read their opinions before the court annulled the elections.

Opposition supporters broke into celebration outside the court as well as in opposition strongholds as the judgment was announced on Friday. “This is a precedent-setting ruling, very historical. I’d like to take this opportunity to thank the Supreme Court judges led by the chief justice for this opportunity for the people of Kenya,” Mr. Odinga said.

Making sense of the tension and contradictions in Kenya and Rwanda's elections
Anthony Egan, S.J.

Kenya has made history, as it has become the first country in Africa to annul a presidential election. Many Kenyan observers have already expressed some concern about how people will react to this ruling because of the violence that the country has experienced in the past over disputed elections.

Mr. Odinga is a member of the Luo, an ethnic group from the western part of the country that has long said it is excluded from power. Mr. Kenyatta is from the Kikuyu group, which has supplied three of the four presidents since Kenya gained independence from Britain in 1963.

Whether Mr. Kenyatta or Mr. Odinga can contain their followers and ensure calm in the country will be the biggest test they face in the next few days. Kenyan authorities bolstered security before the court’s decision. Security measures will, no doubt, be kept in place as the nation reacts to the court’s ruling.