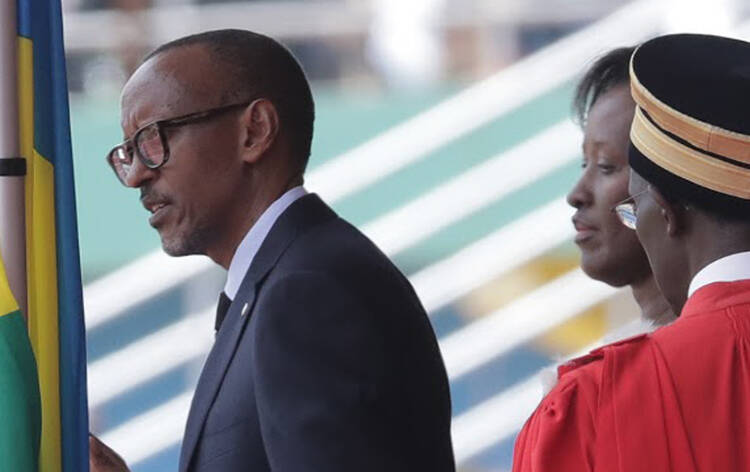 President Paul Kagame is sworn in for another term at the Amahoro Stadium in Kigali, Rwanda, on Aug.18. (AP Photo Eric Murinzi)

Two elections this month in eastern and central Africa—in Kenya and Rwanda—have brought out tensions and contradictions in the continent’s democratic process, highlighting the strange relationships between democracy and authoritarianism, or instability and control, and their impact on national economies.

The Aug. 8 elections in Kenya were marred from the start with conflict and controversy. On July 27, one of the top officials of the Independent Electoral Commission was tortured and murdered in Nairobi by person or persons unknown. Christopher Msando had been a key player in developing the new electronic voting system.

Two days later a machete-wielding assailant attacked the home of Deputy President William Ruto. Though Ruto was away at the time, an 18-hour siege ended with the death of the attacker and a security guard.

When the incumbent President Uhuru Kenyatta and his party (the Jubilee Party of Kenya) won the election with 54 percent of the vote, the leader of the opposition National Super Alliance, Raila Odinga, cried foul, claiming electronic “voter theft.” Protests followed and turned violent in Odinga-supporting areas. Mr. Odinga has decided to take the results to the Kenyan Supreme Court, despite the local and international observers’ conclusion that the election was basically free and fair.

When the incumbent President Uhuru Kenyatta won the Kenyan election with 54 percent, the leader of the opposition cried foul, claiming electronic “voter theft.”

In contrast, the elections in Rwanda on Aug. 4 passed almost without incident. The incumbent, Paul Kagame, was re-elected for a third seven-year term with a somewhat astonishing 98.8 percent against two other candidates. There was no electoral violence, no public disputing of the outcome and no overt signs of electoral fraud. Apart, that is, from one candidate for presidency, Diana Rwigara, having nude photos of herself leaked onto the internet, probably to discredit her.

This was, some observers claim, the tip of an iceberg. Human Rights Watch claimed that the run-up was marked by widespread political repression. Rwigara was excluded from the race for allegedly including dead people in her list of supporters of her candidacy for president (required for her to run), a point she denies.

While many see the result as a sign of repression, supporters of Kagame see it as a sign that his no-nonsense approach to rebuilding a country that was devastated by the mid-1990s genocide has grassroots support. There may be truth in that: Under Kagame’s authoritarian rule, the country’s economy has boomed. Described as one of the fastest growing economies in the world, Rwanda has had a GDP growth rate of around 8 percent, has reduced poverty levels, invested in infrastructure and technology, and is rated by the World Bank as the second best country to do business in in Africa (56th in the world). It is also rated by Transparency International as the third least corrupt country on the continent, ranking 50th out of 176 countries worldwide in 2016.

There is the temptation to suggest, looking to Rwanda, that a tightly controlled state committed to economic growth is—despite human rights abuses—a good thing.

In contrast, Kenya’s transparency rank was 145th. It ranked 92nd in the World Bank assessment of the ease of doing business. Though it has a bigger economy than Rwanda’s, with far more industry, it is hampered by political instability—as evidenced by the last election —and the problem of corruption. Compared to Rwanda, its infrastructural growth is much slower.

There is the temptation to suggest, looking to Rwanda, that a tightly controlled state committed to economic growth is—despite human rights abuses—a good thing. There are many countries in the world that achieved prosperity under authoritarian or semi-authoritarian regimes (e.g., South Korea, Taiwan, Singapore and China). Some political scientists observe that while a correlation might exist, many other factors come into play: levels of inequality, corruption versus transparency, economic policies, geography, natural resources and culture, among others. In Rwanda’s case, a key factor seems to be President Paul Kagame, a figure one might easily call Africa’s Lee Kuan Yew, who has held high office since 1994 and been president since 2000.

Herein, of course, lies the problem. Controversies about his human rights record aside, Kagame—unlike Lee in Singapore—has no apparent successor to take the reins of power after he retires or dies in office. Though he is 59, and thus has time to groom a replacement, in the long term there is a risk. Will Rwanda’s success end with him? This is all too worrying given Rwanda’s past history of civil war and genocide.

However this should offer no consolation to the deeply fragile, though perhaps more democratic, Kenya. The political chaos that marks Kenyan elections and the corruption of the country’s political process does no one any good, least of all the economy. Kenyans need to take the positive aspects of Kagame’s success—anticorruption measures and economic growth—to heart. If they do, it is likely that it will afford Kenya a more certain and long-term stability and prosperity.