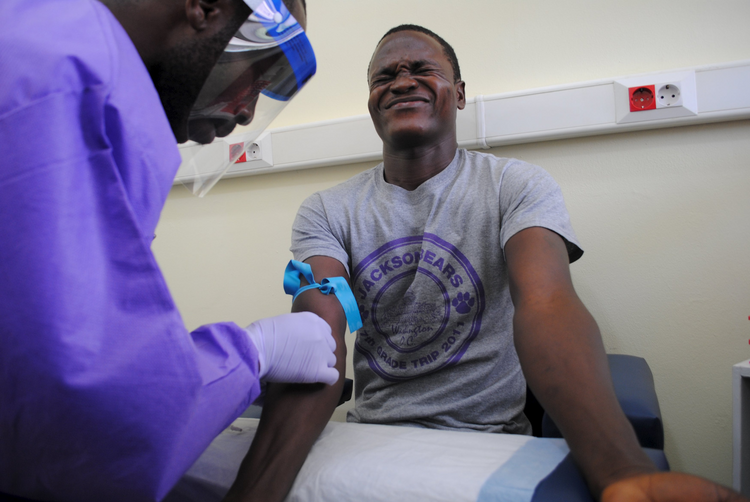 The blood of a survivor of the Ebola virus is extracted as part of a study launched at Liberia's John F. Kennedy Hospital in Monrovia in June 2015. (CNS photo/Reuters)

The modern history of the Democratic Republic of the Congo is tragic: from a brutal, virtual slave state under the rule of the king of Belgium, through a turbulent decolonization that saw the murder of its first prime minister, a brutal war of secession, decades of dictators, coups and civil war, to its present-day struggles. The nation’s troubles continued in early May with an outbreak of the Ebola virus in Bas Uele Province in the north of the country.

The Ebola outbreak in the far north near the border with the Central African Republic is the eighth in Congo since 1976. Congo has a long track record with the hemorrhagic fever, a World Health Organization official said.

"However, we cannot underestimate the logistical and practical challenges associated with this response in a very remote, insecure part of the country," said Dr. Peter Salama, executive director of W.H.O.'s health emergencies program.

Authorities believe three deaths are linked to the outbreak: a 39-year-old man who died before he could reach a hospital, the motorcyclist transporting him and a caregiver traveling with them.

In this case at least there is some hope for the outbreak’s victims. The national Ministry of Health has approved the use of an experimental anti-Ebola vaccine, rVSV-ZEBOV, to combat the disease. This is a radical step, but one the World Health Organization approves.

Global health ethics strongly oppose the use of any medication or treatment that has not been thoroughly tested. There are strict global guidelines in place for all medical research on human subjects. The World Health Organization and research ethics committees normally have a strict process that must be followed before any medication reaches the public.

The Ebola vaccine being used in the Congo has not been through all the necessary trials and has not received the full approval of W.H.O. or other licensing bodies.

Once a drug is developed it goes through a bank of tests, including extensive animal trials and then tightly controlled human trials. If any serious adverse effects are noted, the researchers are compelled to stop all trials. But the Ebola vaccine being used in the Congo has not been through all the necessary trials and has not received the full approval of W.H.O. or other licensing bodies.

There is a very painful history of unethical clinical trials, particularly conducted in Third World countries where there is often limited-to-nonexistent state protection of participants or corrupt governments willing for a price to turn a blind eye to such practices. (Some of this history was superbly depicted in the novel—and film—The Constant Gardener by the great British novelist John le Carré.) The decision to allow the use of any unapproved drug like rVSV-ZEBOV is extremely problematic. In this case, however, it has been approved—or at least condoned—given the urgency of the situation.

There is a historical precedent for accepting this risk. In 2013-15 a major Ebola outbreak occurred in West Africa, centered on Liberia. With over 11,000 deaths and around 28,000 reported cases, there were no effective and approved treatments available to deal with the crisis. Spreading rapidly—leading to death from hemorrhagic fever in more than 80 percent of cases—Ebola is one of the most lethal diseases known today. The threat of it spreading even further in 2013-15 was considerable.

Global health experts converged on West Africa to help, working in countries where public health services were very weak. In an impossible situation, it was decided to do what is normally unthinkable: administer experimental treatments on Ebola patients.

On a personal note, many South African health care personnel took part in the West African crisis in 2013-15, including staff from the medical faculty of the University of the Witwatersrand, where I have served as a member of the medical research ethics committee for over a decade.

Though the committee is hyper-vigilant and uncompromising about “dodgy” clinical trials, I recall a consensus on the decision to use the vaccine. Under normal circumstances breaking the rules was unthinkable. But, quite simply, there was little choice: Without the medication, people would die. With it, they might live. In what amounted to a medical application of the supreme emergency philosophical argument used by Michael Walzer in his reflections on war, it was a terrible gamble—but it largely worked.

By December 2016, a study based on the emergency experimental use of rVSV-ZEBOV suggested that it was 70 to 100 percent effective. Despite this, it remains technically an unlicensed vaccine, awaiting the approval of the U.S. Food & Drug Administration and other similar national and international bodies.

If it is applied successfully now in the Congo (and in continuing outbreaks in Central and West Africa), perhaps its approval will be speeded up. Medical ethicists, however, should still insist that this case is not the exception that justifies changing the rules on clinical trials.

This article also appeared in print, under the headline “A vaccine is put to emergency use to combat Ebola in Congo,” in the June 26, 2017, issue.