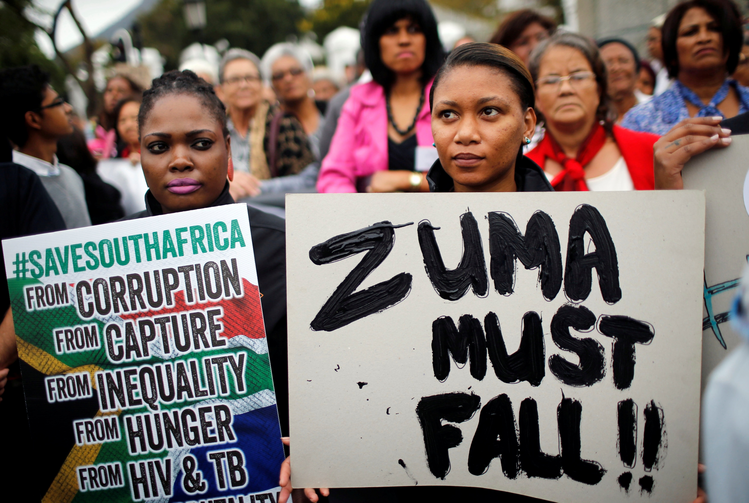 Despite an unprecedented secret ballot and mounting evidence of corruption, South African President Jacob Zuma survived his eighth no-confidence vote in Parliament on Tuesday, Aug. 8. Later that night before a crowd of adoring supporters, he gleefully proclaimed that parliamentary “technicalities” could not remove him. Referring to the ruling African National Congress party, he added, "You can't touch the A.N.C."

Meanwhile, the finance market, which had risen considerably in the run-up to the vote, tanked in the immediate hours afterward. The day after the vote was Women’s Day, a South African public holiday, so the stock market was closed. Whether the economy will continue to decline or pick up slightly in the next few weeks is anybody’s guess.

The no-confidence vote was the culmination of a process that started when the opposition Democratic Alliance asked the nation’s Constitutional Court to rule on whether a no-confidence vote should be conducted by secret ballot. The Democratic Alliance argued that given the power Zuma had over his party, A.N.C. members of Parliament would feel coerced to support him even if they had personal reservations. The no-confidence vote was called by the opposition in Parliament in the wake of overwhelming evidence of the president’s corrupt dealings with the Gupta family. The Guptas, an Indian business family living in Dubai but with South African citizenship, have long been accused of corruption. The so-called GuptaLeaks of the last few months have provided further proof of the president’s ties to the family.

Moreover, since the dismissal of Pravin Gordhan as finance minister earlier this year, a growing number of A.N.C. members, as well as those formally in alliance with the ruling party—notably the South African Communist Party and the Congress of South African Trade Unions—have been calling for Zuma’s dismissal.

While the A.N.C. and Zuma won the day, about 30 A.N.C. members voted to remove Zuma.

The Constitutional Court ruled on June 22 that a secret ballot was permissible in the latest attempt to unseat the president. They further ruled that it was up to the Speaker of the House, Baleka Mbete, a Zuma supporter, to decide whether to take that step. A day before the vote, she announced that she would allow a secret ballot to proceed. This was almost certainly based on a calculation that there would not be enough dissident A.N.C. members of Parliament to unseat Zuma.

She was right. The result was 177 votes for the no-confidence resolution, 198 against, nine abstentions and five absences. But while the A.N.C. and Zuma won the day, about 30 A.N.C. members voted to remove Zuma.

Analysts have been trying to interpret the vote, with some suggesting that it was a kind of victory for the opposition and that it highlighted dissent within the A.N.C. Here the hope is that this dissent will grow in the months leading to the A.N.C.’s December conference, and that when the conference elects Zuma’s successor, they will choose someone from the anti-Zuma faction to take over the party and—in all likelihood—the country in the 2019 general election.

Others, including the distinguished political scientist Steven Friedman, suggest the recent vote is a disaster for the opposition. Both Julius Malema, of the Economic Freedom Fighters, and Bantu Holomisa, of the United Democratic Movement, had claimed that a secret ballot would remove Zuma. The fact it did not has damaged their credibility. Only the Democratic Alliance had taken a more low-key approach to the vote.

Moreover, Friedman warned that because of the secret ballot, the transparency and accountability of Parliament might suffer in the long run. Even more ominous was that the A.N.C. correctly predicted how many of their own would temporarily jump ship. As Zuma loyalists start calling for action against “disloyal” A.N.C. members of parliament, the safety of dissidents ostensibly protected by the secret ballot is in doubt. There may be a wave of expulsions from the party and from Parliament that may ultimately strengthen Zuma’s grip on the A.N.C., both now and through a new surrogate party leader in 2019.

“The vote showed that there are no short cuts. Even secrecy could not persuade enough A.N.C. MPs to shift—those who did were surely more influenced by open and public pressure than by the fact that they could vote in secret. Directly or indirectly, who presides over this country will be decided by voters. It is to them that opposition parties and civic activists need to talk—in the open, the only place where power can really be held to account.”

Meanwhile Zuma carries on regardless. Some think he has the proverbial nine lives of a cat—with eight down and one to go. Less optimistic folk might simply remind us that there is no scientific proof to the proverb.