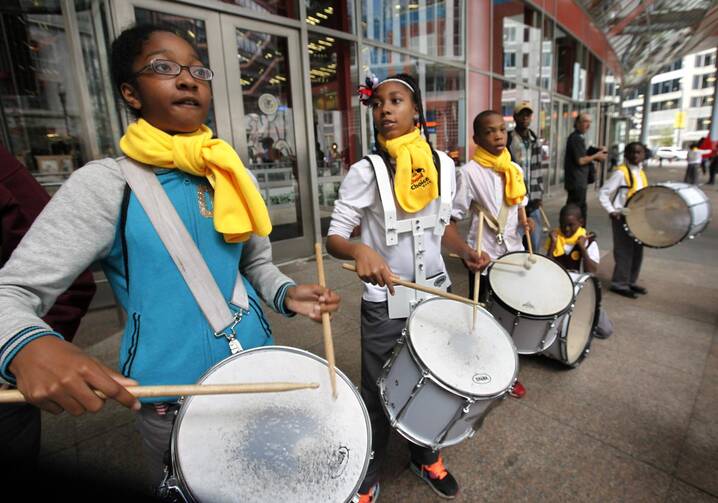 As he campaigned for president, Donald J. Trump promised repeatedly that should he be elected, he would push for a massive $20 billion investment in charter and private schools, including Catholic schools, through a federal scholarship tax credit program. But eight months into his presidency, advocates of “school choice” wonder if the president will be able to deliver on his promise.

In March, the Trump administration proposed a budget that included $1 billion for an unspecified school choice program, along with $250 million in grants meant to help families pay for private school. (The president’s budget also axed the Department of Education’s budget by more than $9 billion.)

In March, the Trump administration proposed a budget that included $1 billion for an unspecified school choice program, along with $250 million in grants meant to help families pay for private school.

Betsy DeVos, the secretary of education and a school choice proponent, praised the president’s proposals about expanding scholarship programs at the federal level back in May—but she said states must take the lead.

“When it comes to education, no solution, not even ones we like, should be dictated or run from Washington, D.C.,” Ms. DeVos said in a speech to the American Federation for Children in May, promising the audience of school choice advocates that the president would deliver “the most ambitious expansion of education choice in our nation’s history.”

Her speech drew quick condemnation from Randi Weingarten, president of the American Federation of Teachers, who called the president’s proposals “a reverse Robin Hood strategy of robbing schools of investments that work for kids, like after-school programs, to pay for [Ms. DeVos’s] pet privatization and voucher programs.”

The House of Representatives seemed to take the wind out of the president’s sails, responding in July with its own budget blueprint, which both chopped school choice provisions and softened education-related budget cuts. Now school choice advocates say the best bet for action could come with Republican-backed proposals for tax reform, which congressional and White House leaders hope to begin crafting in September and pass before the end of the year.

“The fact that the House took it out of the budget is not encouraging,” Sister McDonald said. But “if they get around to tax reform, it could be part of the tax program.”

Tax credit scholarship programs currently operate in 17 states, according tothe National Conference of State Legislatures. Though each state has its own rules, the programs are usually structured to allow individuals or businesses to donate to nonprofit scholarship organizations. In return, the donors can then deduct part of the donation, or sometimes the full amount, from their state tax obligation.

Tax credit scholarship programs differ from voucher programs, which funnel government dollars to parents to use at private or religious schools.

Public school supporters point to recent studies that show some students regressed in math after using vouchers to attend private schools, while other critics argue that they violate the establishment clause of the U.S. Constitution. Thirty-seven states prohibit government support for faith-based schools, with state constitutional amendments tracing their roots to the 19th century, when James G. Blaine, a Republican speaker of the House, fought at the federal level to prevent government funding of Catholic schools.

A recent Supreme Court decision, Trinity Lutheran v. Comer, which ruled that government money could be used to construct a playground at a church, was celebrated by some voucher advocates. They hope that state Blaine Amendments can now be successfully challenged in court. That could be important to school choice advocates, as the expansion of tax credit scholarship programs at the state level has proven difficult in recent years, even in states controlled by Republicans, who have been more receptive to school choice programs.

“Unfortunately, over time this has become a Republican issue,” Sister McDonald said. “We tried to keep it apolitical, and we look at it as helping all parents as the primary educators of their children.”

But even when Democratic leaders back tax credit scholarship programs, there is no guarantee that bills will become laws. In New York, Gov. Andrew Cuomo, a Democrat, has failed to rally enough support to implement a program, even with vocal support from Catholic leaders in the state.

Earlier this year, President Trump called on Congress “to pass an education bill that funds school choice for disadvantaged youth” that would allow parents “to choose the public, private, charter, magnet, religious, or home school that is right for them.”

Cardinal Timothy Dolan of New York responded to the speech in a Wall Street Journal op-ed article, pointing to unsuccessful efforts in New York and arguing that “a national solution is needed to bring relief to families who need it.”

“I have seen firsthand why Catholic families and leaders support scholarship tax credits. They help advance educational and economic justice. They strengthen society by creating opportunity for those who might not otherwise have it,” he wrote.

For her part, Sister McDonald says she wants “to see the president keep his promise” on school choice by creating “a program that is available in all 50 states.”

“We want to support parents on what’s best for their kids,” she continued. “Hopefully that’s Catholic school, but if that’s not their choice, we’d still support it.”

Government vouchers that let kids go to Catholic schools sounds like a great idea, especially for inner cities. It is not. Federal money will kill Catholic schools. It is a cancer. Only one way to make Catholic schools affordable and accessible especially in the inner city: All Catholics have to care enough to sacrifice and freely give money to support it whether they have kids in school or not. It is not truly Catholic education if only the well-off can obtain it..