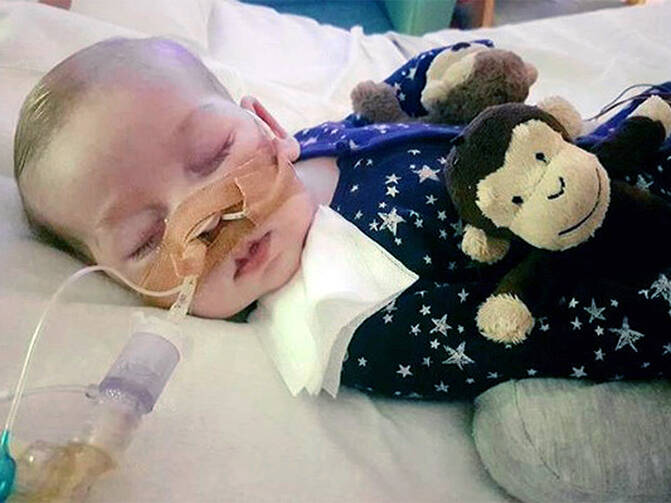 (RNA photo/AP from the family of Charlie Gard)

LONDON (RNS)—Charlie Gard didn’t make it to his first birthday.

The baby died on Friday, July 28 after his parents gave up a protracted legal battle with a London hospital over whether he could be successfully treated in the United States for a rare genetic condition. He was 11 months and three weeks old.

Charlie’s tragic fate became a cause célèbre, sparking a global debate on the ethics of life and death.

It prompted reactions from President Trump and Pope Francis and drew crowds of emotional people who waited outside the high court in London for judgments on the baby’s care. And there were howls of protest on social media from people who accused the Great Ormond Street Hospital for Children of wanting to end Charlie’s life. Hospital staff even reported receiving death threats.

Charlie’s predicament was framed by the parents’ supporters as a pro-life issue, but it also highlighted differences between the U.S. and Britain over what role faith should play in medical matters.

When Charlie was born on Aug. 4, 2016, he seemed an apparently healthy baby, but as he failed to develop, doctors discovered that he had encephalomyopathic mitochondrial DNA depletion syndrome, which causes severe brain damage and causes the organs to shut down. He could not breathe unaided or move on his own.

After a series of medical investigations, a conflict between Charlie’s parents, Connie Yates and Chris Gard, and the medical profession emerged. While the family, supported by American religious campaigners, began crowdfunding to raise money for their child to have experimental therapy in the United States, the hospital went to the high court to ask for the go-ahead to rule that the baby’s life-support system should be turned off.

Some commentators, supporting the parents’ wish to take their child abroad for treatment after the hospital said there was nothing more to be done for Charlie, saw the move as akin to euthanasia. Fordham University ethicist Charles Camosy, who is also a commentator at RNS and Crux, wrote: “Little Charlie Gard has been sentenced to die by those who hold power over him in the United Kingdom.”

A similar view was expressed by the American pastor Patrick Mahoney, who took up the parents’ campaign and prayed with them at rallies. He maintained that only the parents had the right to determine the welfare of the child. Even the leading British doctor, Lord Winston, who is diametrically opposed to the pro-life lobby’s approach to the case, said that “the autonomy of parents is probably sacrosanct because a child can’t give approval, can’t give consent.”

But in English law parents do not have rights regarding their children, according to Ian Kennedy, health law and ethics professor emeritus at University College, London.

“They only have duties, the principal duty being to act in their children’s best interests,” he wrote in The Guardian. “This has been part of the fabric of our law and our society for a long time.”

But neither does the hospital have ultimate power. In England, the courts are required to step in and represent the child when doctors and parents cannot agree.

Mahoney, who belongs to the Reformed Presbyterian Church, flew to London to support the Gard family and said that he was refused permission to pray at the baby’s side in the hospital. Although many British hospitals have Christian chaplains, overt displays of faith are often frowned on in the National Health Service. Catherine Glenn Foster, president of Americans United for Life, which opposes euthanasia, also headed to London to back Charlie’s parents.

Another American who intervened was the evangelist and CEO of the Billy Graham Evangelistic Association, Franklin Graham. He said Charlie’s plight was the result of British “socialized medicine,” a pejorative term used by American conservatives to criticize both the British state system and Obamacare. Trump also intervened via Twitter, offering to help Charlie get treatment in the United States.

Pope Francis also tweeted about the case. “To defend human life, above all when it is wounded by illness, is a duty of love that God entrusts to all,” he wrote. Vatican spokesman Greg Burke said the pope was praying for Charlie’s parents, “hoping that their desire to accompany and care for their own child to the end is not ignored.”

But the controversy was not so much about the parents’ accompaniment to the end but when that end would come.

The president of the Pontifical Academy for Life, Archbishop Vincenzo Paglia, stressed that Catholic teaching does not require life to be maintained at all costs, saying people “must recognize the limitations of what can be done.”

But just how binary the issue had become was illustrated by Lord Winston, well-known as an expert on genetics and in vitro fertilization who declared the involvement of the Vatican, including the offer of help from the Gesu Bambino Hospital, as “cruel.”

The view of the Bishops’ Conference of England and Wales echoed that of Archbishop Paglia: “Prolonged terminal illness is part of the human condition. We should never act with the deliberate intention to end a human life, including the removal of nutrition and hydration so that death might be achieved. We do, sometimes, however, have to recognise the limitations of what can be done, while always acting humanely in the service of the sick person until the time of natural death occurs.”

Theologian Tina Beattie, of Roehampton University, praised what she described as the “nuanced” approach of the Catholic bishops of England and Wales and said she was appalled by the commentaries and protests of some of those who claimed to be supporting Charlie.

“This became a Manichean issue of life and death when it was so much more complex than that, and an intensely private trauma had been seized upon by people with a specific agenda,” she said.

On July 25, Charlie’s parents agreed with his doctors that his final days should be spent in a hospice rather than hospital. They had hoped to take their baby home but this was ruled out as impractical because of the equipment doctors say he still needs.

As the infant’s life drew to a close, the focus shifted to making his end as peaceful as possible—in stark contrast to the previous weeks of noisy protest that made news around the world.

We could use some guidance here.

When natural death is immanent, at what point do efforts to sustain life cease to be "pro-life"?