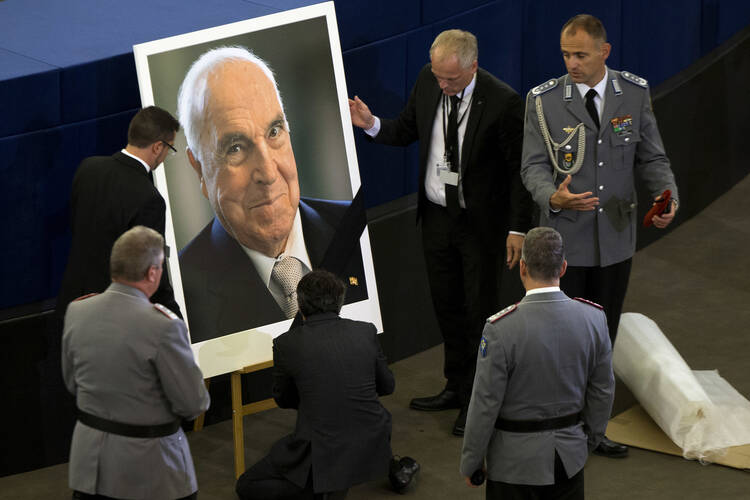 European Parliament employees set up a portrait of former German Chancellor Helmut Kohl before an European ceremony in Strasbourg on July 1. The ceremony was followed by a requiem Mass at the cathedral in Speyer, Germany. (AP Photo/Michel Euler)

The two cardinals, two archbishops, two bishops and 1,500 prominent guests had come to the Imperial Cathedral of Speyer in Germany, the 11th-century burial place of eight Holy Roman Emperors, not to crown or canonize another legendary figure but to lay to rest the former chancellor of Germany, Helmut Kohl—one of only three people to be honored by the European Union as an Honorary Citizen of Europe. Kohl, who died on June 16 at the age of 87, is the first person to be honored with an official memorial event by the European Union, simply for being, as a video during the ceremony in the French city of Strasbourg had it, “a great European.”

Perhaps no one who spoke in Strasbourg knew Helmut Kohl better than Jean-Claude Juncker, president of the E.U.’s European Commission, who evoked the most moving image of the former chancellor’s achievement. “I like things that go together,” he recalled the French theologian Blaise Pascal as saying. So it was for Kohl, to whom European union and German union were two sides of the same coin. He wanted not a German Europe, but a European Germany (a phrase first used by Thomas Mann). And when the time came that his own country might be one again, Juncker continued, Kohl felt the rippling of the mantel of God—and seized it.

Kohl is the first person to be honored with an official memorial event by the European Union, simply for being “a great European.”

The immense man from the Pfalz, who so loved his homeland, committed himself agilely, quickly and decisively to what many others, even Konrad Adenauer, had spoken of only with a kind of “maybe one day” reservation. He was prepared to do so because of the personal relationships he had cultivated since he began his 16-year chancellorship in 1982. The image again and again recalled in Strasbourg was of Kohl and François Mitterrand walking through the once bloody fields of Verdun, hand in hand. The same personal investment in politics came to the fore when, with the adoption of the Euro in 1999, European unification became irreversible. Sitting on the lawn at Georgetown University in a light rain in the spring of 1998, I asked him, “Helmut, why are you putting yourself through yet another campaign?” “For the Euro,” he immediately answered.

Bill Clinton’s speech, explicitly requested by Kohl’s widow, Maike Kohl-Richter, was as emotional as Juncker’s. Recalling their dinners together in Washington, the former president said that Hillary Clinton loved Kohl because he had an even larger appetite than her husband did, often in evidence at his favorite restaurant, Filomena’s. Clinton also praised Kohl by saying “he gave us a chance to be part of something bigger than ourselves.” On the great questions that he faced—a reunited Germany, a united Europe, active resistance to the slaughter in Bosnia, offering a gesture of friendship to Russia after the dissolution of the Soviet Union, the preservation and strengthening of NATO—he answered in each case correctly, said Clinton.

Bill Clinton praised Kohl by saying “he gave us a chance to be part of something bigger than ourselves.”

“I loved the guy,” said the former U.S. president, who reminded the crowd of some 900 in the European Parliament’s plenary hall, as he pointed to his friend’s coffin, that “We’re all going home.” Every one of us, of whatever rank. There was more than a little mourning in the words, an undeniable moment of autobiography, and a chastening of the solemn grandeur of the occasion. And there were more than a few tears in the hall, as there had been when Juncker addressed his friend in Paradise and asked him please not to start a new section of his political party, the Christian Democratic Union, there.

Felipe González, former prime minister of Spain (King Juan Carlos I and Queen Sophía were also there), and Dmitry Medvedev, prime minister of Russia, spoke of getting Kohl’s support when they needed it. But someone who never knew the chancellor, French President Emmanuel Macron, added a telling note about Kohl’s deeper legacy, including the personal values and warmth that can give political ideas their full strength. Warning of a merely technocratic Europe, Macron presented himself as an ally of current German Chancellor Angela Merkel in their commitment to the European project. Kohl, he pointed out, did not speak French, but he knew France. “And now we have every reason to be realistically optimistic,” he ended. ”To have courage and hope.”

It was then for Merkel to give the closing, and longest, speech. She did not hide their known disagreements but emphasized that so much of what is taken for granted today in Europe would not have been possible without him. She praised his remarkable feeling for what was feasible and, again, his ability to create reliable ties and bonds. Yes, she said, he was a down-to-earth person whom many intellectuals might scoff at. (To others, including myself, he was actually a very well-educated man, conversant with history and culture, architecture and music, but without any pretensions to rarefied expertise.) She honored his insistence on the monument in Berlin to the murdered Jews of World War II. She thanked Maike Kohl-Richter for her dedication to her husband, and then thanked Kohl for the “chances and opportunities you gave me.” Her final words, addressed to the coffin draped in the European flag, were: “I bow before you in gratitude and humility.”

The solemnity of the occasion was accompanied by deep sorrow, and yet a true hope.  Europe had done its duty in honoring its great citizen—and could only be true to itself by a new commitment from, in Juncker’s words, “all of us who love Europe.” As the coffin, now covered with the German flag, was taken from Strasbourg, through Kohl’s hometown of Ludwigshafen and down the Rhine to Speyer, the sky darkened. But the sight of the incomparable cathedral raised hearts and, once within, the funeral liturgy—ever ancient, ever new—reminded us where our final hope comes from. The music, by composers from six different European countries, was magnificent. Every flame of faith in the vast space, each in its own and yet mysteriously conjoined way, added to the prayer for the man going home, for his peace and for the peace of the world he had served so well.

I suspect Kohl fans would like to forget Yugoslavia. He united Germany and tore that country apart.