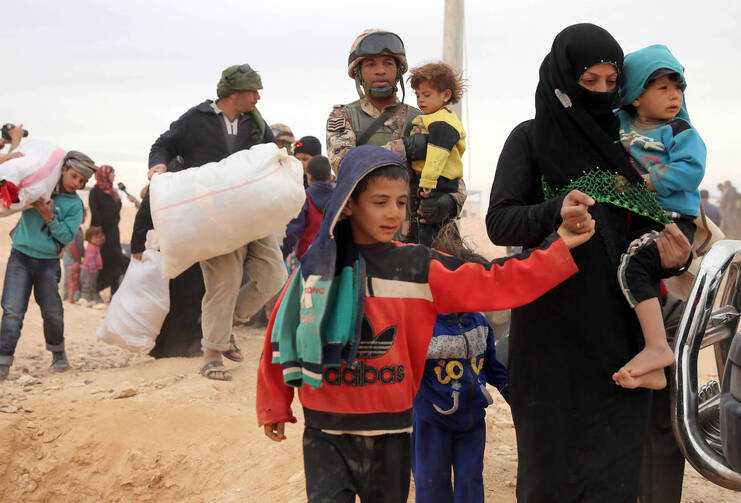 Syrian refugees arrive in early May at a camp on the border in Royashed, Jordan. (CNS photo/Jamal Nasrallah, EPA)

Congratulations on your inauguration. Americans, whether supporters or critics of your candidacy, know that in the days ahead you will have to come to grips with many challenges that will affect not only the well-being of the people of the United States, but of all peoples worldwide. All Americans hope that you will address these issues effectively and in accord with the deep values of our country.

Not least of these challenges is the U.S. response to human migration. Today people are on the move in unprecedented numbers. Some move voluntarily, drawn by economic opportunities or family ties. Others—some 65 million and growing—have been forcibly uprooted by war, persecution, ethnic and religious strife, dire poverty, natural catastrophe or environmental degradation. Their number is equivalent to the entire population of Great Britain.

Our organization, Jesuit Refugee Service, knows well the struggles refugees face. We know how eager they are to live in safety, use their skills to regain self-sufficiency and prepare their children for a better future.

Refugees are survivors. As Americans, we share their values: the will to overcome any obstacle, to assert independence, to defend hard-won freedoms and to achieve success through sheer determination. This should come as no surprise because so many Americans have come to our country as refugees. In earlier days, these were Irish escaping man-made famine, Scots driven from their land, Jews and evangelicals escaping Soviet repression. In recent years they have included Vietnamese prisoners of war, the workers and translators who supported U.S. forces during our wars in Iraq, and survivors of conflict in Somalia, Myanmar and Syria. In the past four decades, about three million such refugees have been offered new lives in the United States under the U.S. resettlement program. They are weaving their lives into the tapestry of this country through the work of their hands.

Our country’s welcome of these newcomers expresses who we are as a people. It is a sign of our commitment to the rights of refugees to seek and enjoy asylum from persecution. It reflects our desire to respond to the call of the Jewish and Christian scriptures to welcome strangers among us, especially those in danger or great need. It is rooted in the recognition that all men and women possess a shared human dignity and, in the eyes of faith, are sons and daughters of a loving Creator who calls us together as one human family.

Though essential for those most in need, asylum and resettlement can assist fewer than 1 percent of the world’s refugees. Most will remain in temporary exile until they can return home. This reality places a tremendous strain on the very poor countries that host the vast majority of refugees. It is essential that U.S. assistance to these host countries be continued and, indeed, increased. The United States should also intensify its leadership in diplomatic efforts to alleviate the underlying causes of forced migration, and to facilitate safe return when conditions allow. As Pope Francis said before Congress during his U.S. papal visit, “In a word, if we want security, let us give security; if we want life, let us give life; if we want opportunities, let us provide opportunities.”

Mr. President, the generosity of the United States in response to the needs of refugees is a source of our reputation as “the last best hope of humankind” and expresses our highest moral values. Our leadership in this effort will also benefit our country economically and politically by contributing to world peace and stability. In today’s uncertain international environment we should seize the opportunity to advance human dignity through a revitalized refugee response. When you consider actions you might take to fulfill your promise to make America great again, remember the greatness of heart that is at the foundation of just and humane U.S. refugee assistance. Our nation and our world look to you for a magnanimous response to those who have been forced from their homes.

Show Comments (
6
)
Comments are automatically closed two weeks after an article's initial publication. See our comments policy for more.
Lisa Weber
4 years 10 months ago
This is a nice letter, stating the truths well. Unfortunately, it is addressed to a man who does not read. To all appearances, he does not think either. It is a good reminder for the rest of us, though.
John Walton
4 years 10 months ago
@lisa -- in point of fact, Trump is a voracious reader and a very good listener. He also keeps a very sloppy desk. Fr. Donovan is to be praised for his letter. It's a pity that it wasn't addressed to Franklin Roosevelt in 1944.
Tom Fields
4 years 10 months ago
...and Obama did so much to combat the terrorism and murder destroying millions of families----right on!
Stuart Meisenzahl
4 years 9 months ago

Lisa
Your ability to put your personal political bias at the forefront of every issue you comment on (see comments/other articles in America) results in diluting the merit of any substance your observation might otherwise have.