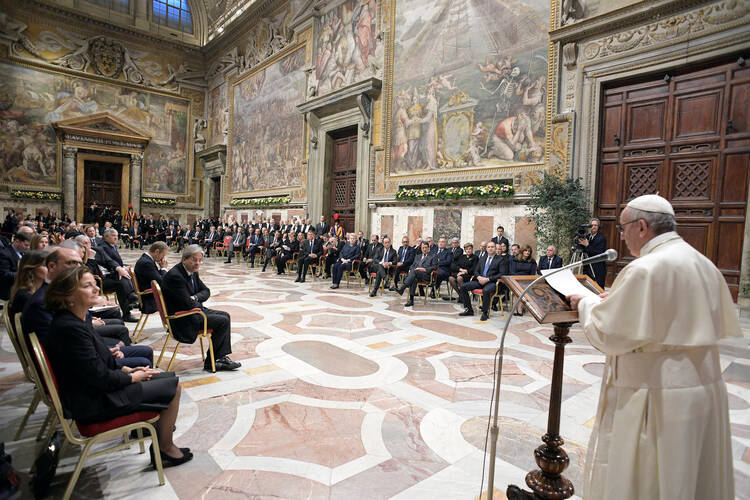 “What hope is there for the Europe of today and tomorrow?” Pope Francis asked when he addressed the leaders of 27 European Union countries this evening in the Sala Regia (Royal Hall) of the Vatican’s Apostolic Palace, on the eve of the 60th anniversary of the signing of the Treaty of Rome, March 25, 1957, that created the European Economic Community, the forerunner of today’s European Union.

He said the answer to that question is to be found in “the pillars” with which the union’s founding fathers—the leaders of Belgium, France, Germany, Holland, Italy and Luxembourg—had laid 60 years ago, namely: “the centrality of man, concrete solidarity, openness to the world, the pursuit of peace and development, openness to the future.”

Today the E.U. has 28 member states (but the United Kingdom has voted to leave it, and its Prime Minister was not present), some 500 million people, 22 percent of the world’s G.D.P., and is a big hitter on the world scene, but it is threatened by populist movements in several countries that exploit internal problems, including the question of migration, and push to exit from the union.

Francis believes in the E.U., and sees its importance not only for the peoples of this continent but also for peace and development in the world, but he is convinced it must be reformed. He made this clear today, and advocated that on the path to reform E.U.’s leaders should revisit the origins of the union in 1957 when its founding fathers signed the Treaty “after the dark years and bloodshed of the Second World War” because they “had faith in the possibility of a better future.”

He recalled that from the outset, the founding fathers understood that the Treaty would remain a dead letter unless they had “spirit and life” and so they agreed that “the first element of European vitality must be solidarity.” Francis emphasized that this spirit of solidarity “remains as necessary as ever today, in the face of centrifugal impulses and the temptation to reduce the founding ideals of the Union to productive, economic and financial needs.”

Sixty years ago, he said, the world was marked “with the tragedy of walls and divisions” and “it was clearly important to work for a united and open Europe,” but he noted that today Europeans seem to have forgotten all this and now focus on “how to keep out the ‘dangers’ of our time: beginning with the long file of women, men and children fleeing war and poverty, seeking only a future for themselves and their loved ones.” They forget too that the 1957 treaty has led to “the longest period of peace experienced in recent centuries” and “without peace we cannot build a future for anyone.”

The world “has changed greatly” since then he said, and is today “dominated by the concept of crisis”: the economic crisis, the crisis of the family and of established social models, the crisis of institutions and the migration crisis. These crises “engender fear and profound confusion in our contemporaries, who look for a new way of envisioning the future.”

He explained that in the original Greek the word “crisis” means “to discern, to weigh, to assess,” and declared that “ours is a time of discernment, one that invites us to determine what is essential and to build on it. It is a time of challenge and opportunity.”

Pope Francis said opportunity can come by restoring “the pillars” on which the union was first founded.

He said the opportunity can come by restoring “the pillars” on which the union was first founded. He told E.U. leaders that the union “finds new hope when man is the center and the heart of her institutions.” But for this hope to become reality he said E.U. leaders must listen to “the expectations voiced by individuals, society, and the peoples who make up the Union,” because right now this is not happening and “there is a growing ‘split’ between the citizenry and the European institutions, which are often perceived as distant and inattentive to the different sensibilities present in the Union.”

By affirming “the centrality of man,” Francis said one can also recover the spirit of family, “whereby each contributes freely to the common home in accordance with his or her own abilities and gifts.” He described the E.U. as “a family of peoples” that “was born as a unity of differences and a unity in differences” and said that today it “needs to recover the sense of being primarily a ‘community” of persons and peoples.’”

Above all, he said, Europe needs to recover a sense of “solidarity,” because therein lies its hope for the future. This solidarity entails “the awareness of being part of a single body” so that “when one suffers, all suffer.” In this context, Francis expressed solidarity “with the United Kingdom” and said, “we mourn the victims of the attack that took place in London two days ago.”

Solidarity as “the most effective antidote to modern forms of populism,” Francis said and contrasted it with populism. “Solidarity is expressed in concrete actions and steps that draw us closer to our neighbors, in whatever situation they find themselves,” whereas “forms of populism are instead the fruit of an egotism that hems people in and prevents them from overcoming and ‘looking beyond’ their own narrow vision.” He emphasized the need for the peoples of the E.U. “to start thinking once again as Europeans” and called for a political leadership “which avoids appealing to emotions to gain consent, but instead, in a spirit of solidarity and subsidiarity, devises policies that can make the Union as a whole develop harmoniously” as a result of which “those who run faster can offer a hand to those who are slower, and those who find the going harder can aim at catching up to those at the head of the line.”

“Europe finds new hope when she refuses to yield to fear or close herself off in false forms of security.”

He told the E.U. heads of state that “Europe finds new hope when she refuses to yield to fear or close herself off in false forms of security.” He encouraged the E.U. to show “openness to the world” and to develop the capacity for dialogue on all levels: “between member states, between institutions and citizens, and with the numerous immigrants landing on the shores of the Union.”

Then turning to the question of immigration that is sparking much controversy in the union, Pope Francis, the son of immigrants, said it is not enough to deal with the immigration crisis as if it were a question of numbers, or an economic or security matter. “The Immigration issue poses a deeper question, one that is primarily cultural. What kind of culture does Europe propose today?”

Referring to “the fearfulness” that “is becoming increasingly evident,” Francis said this fear “has its root cause in the loss of ideals” and added that “without an approach inspired by those ideals, we end up dominated by the fear that others will wrench us from our usual habits, deprive us of familiar comforts, and somehow call into question a lifestyle that all too often consists of material prosperity alone.”

The Jesuit pope recalled that “the richness of Europe has always been her spiritual openness and her capacity to raise basic questions about the meaning of life” and “a positive openness to this world” but he noted that “today’s prosperity seems to have clipped the continent’s wings and lowered its gaze.” 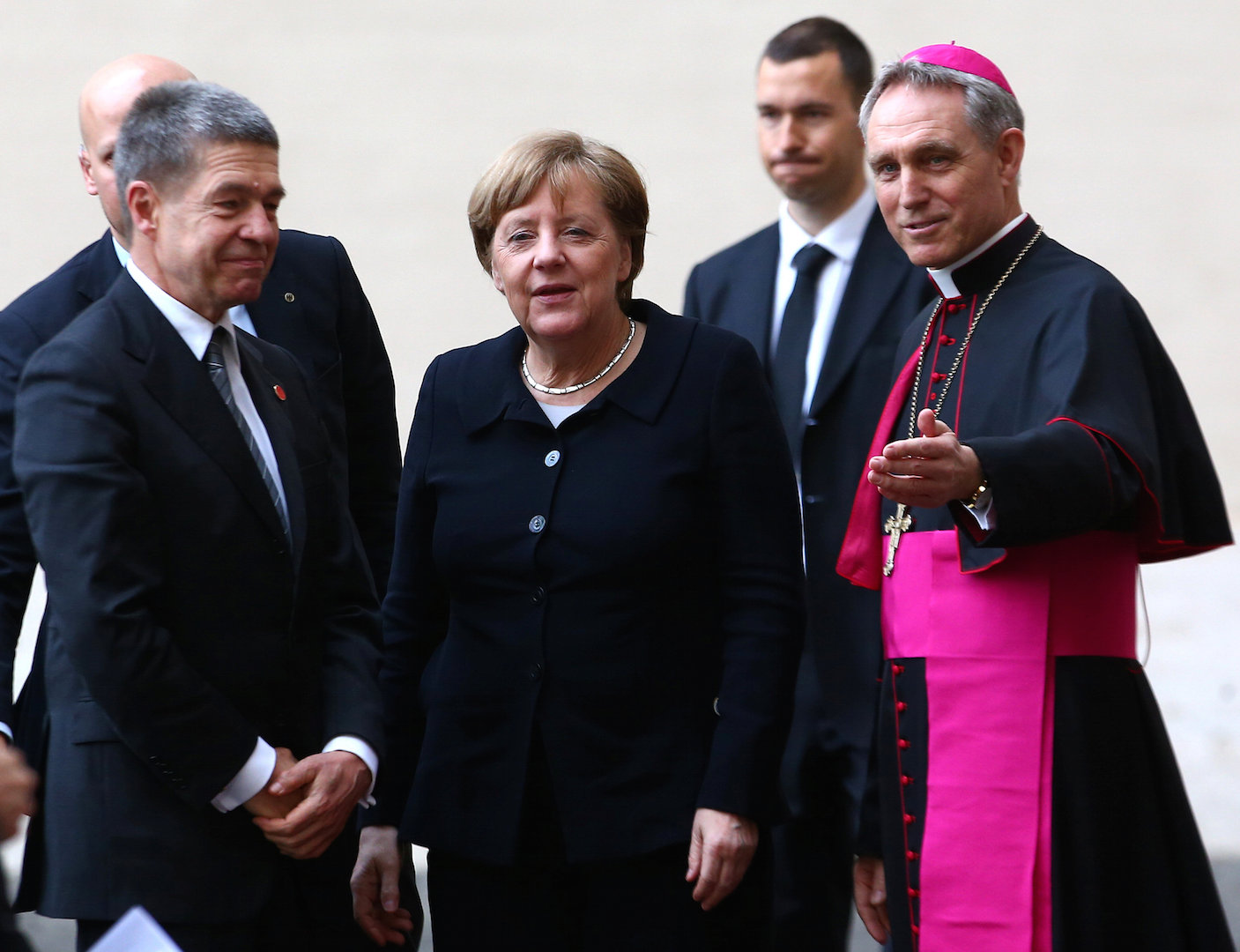 He reminded E.U. leaders that “Europe has a patrimony of ideals and spiritual values unique in the world, one that deserves to be proposed once more with passion and renewed vigor, for it is the best antidote against the vacuum of values of our time, which provides a fertile terrain for every form of extremism.”

He told them that the union would regain hope if it “invests in development and in peace,” a development that includes “the dignity of labor, decent living conditions, access to education and necessary medical care.” In his encyclical on “The Progress of Peoples,” Paul VI said that “development is the new name of peace,” and today Francis added that “there is no true peace whenever people are cast aside or forced to live in dire poverty. There is no peace without employment and the prospect of earning a dignified wage. There is no peace in the peripheries of our cities, with their rampant drug abuse and violence.”

He told the E.U. leaders that “Europe finds new hope when she is open to the future. When she is open to young people, offering them serious prospects for education and real possibilities for entering the workforce. When she invests in the family, respects the consciences and the ideals of her citizens, makes it possible to have children without the fear of being unable to support them and defends life in all its sacredness.

Francis said the European Union “is called today to examine itself, to care for the ailments that inevitably come with age, and to find new ways to steer its course.” He said it can gain “a new youthfulness” but this “will depend on its readiness to work together once again,” and “to wager on the future.”

He concluded by telling E.U. leaders that they are “called to blaze the path of a ‘new European humanism’ made up of ideals and concrete actions,” and this means “being unafraid to take practical decisions capable of meeting people’s real problems and of standing the test of time.”

He prayed that God would bless Europe with “peace and progress,” and afterwards greeted each E.U. leader.

Two roots that the EU will not return to are 1) Christianity and 2)driving Islam out of Europe. Unfortunately both portend doom for nearly all of Europe.