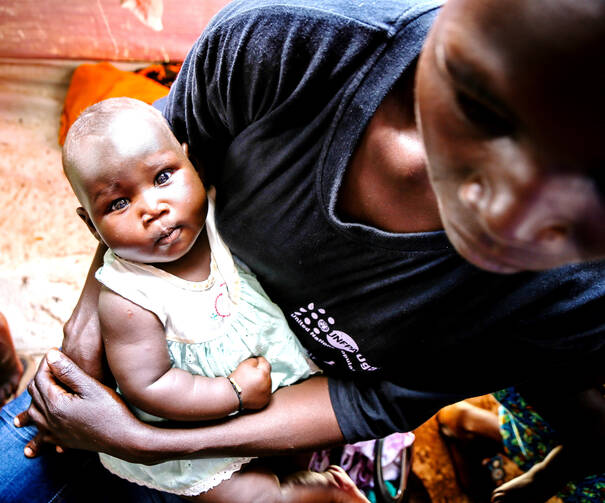 A mother cradles her baby May 30 at the Bidi Bidi refugee camp in Arua, Uganda, where thousands from war-ravaged South Sudan have fled in search of shelter and safety. (CNS photo/Helen Manson, U.S. Embassy in Uganda)

The Canadian Catholic Bishops Conference and Canadian Jesuits International joined other faith groups in Canada this month urging a humanitarian response to the increasingly perilous hunger crisis in east Africa and Yemen. United Nations sources report that as many as 30 million are threatened by hunger in South Sudan, Somalia, Nigeria and Yemen—and 20 million “are at immediate risk.” Famine has already been declared in South Sudan’s Unity state, where more than 100,000 are in imminent peril of starvation.

A man-made hunger crisis born of the ongoing civil conflict in South Sudan threatens 5.5 million in the world’s youngest nation with severe hunger. At the same time, a prolonged region-wide drought, ongoing conflict and political instability in all four countries have left millions more with inadequate food supplies. South Sudan has now become the world’s fastest-growing refugee crisis, according to U.N. officials, with more than 1.8 million people—including one million children—fleeing to safety in Uganda, Sudan, Ethiopia, Kenya, the Democratic Republic of the Congo and the Central African Republic.

Bishop Douglas Crosby, O.M.I., the president of the Canadian Conference of Catholic Bishops and the head of the Diocese of Hamilton, Ontario, joined other Canadian religious leaders in calling for a response “to one of the world’s largest humanitarian crises since the Second World War.” In their statement, Canadian leaders from a number of different faiths and Christian denominations note that a declaration of famine has not been made by U.N. agencies since July 2011, “when some 260,000 people died in Somalia—half of them children under the age of five.”

United Nations sources report that as many  as 30 million are threatened by hunger in South Sudan, Somalia, Nigeria and Yemen—and 20 million “are at immediate risk.”

They write: “The world must not let those horrors be repeated…. Our government has made known its intention to participate more fully at the UN Security Council in the coming years. Now is the moment for our Prime Minister and all Canadian leaders to live up to that aspiration by speaking out clearly and consistently to end the violence taking place in South Sudan, Somalia, Nigeria and Yemen.”

Reports of cholera add to the suffering in several of the afflicted nations. The U.N. Children’s Fund reports that the outbreak in Yemen is particularly acute and spreading at an alarming speed. Over 124,000 cases have been recorded—almost half of them among children.

The cholera outbreak “is overwhelming what remains of Yemen’s conflict-battered health system,” the United Nations reports. “Hospitals and treatment centers are struggling to cope with the large number of patients coming in from across the country. Medicines and intravenous fluids are quickly running out.”

Many, already weakened by hunger, are succumbing to the illness in Yemen, where, according to a U.N. summary: “Children continue to bear the brunt of the war.” Children account for half of all new cases and one quarter of the deaths from cholera since April in Yemen.

As elections approach, will Liberia be able to keep its peace?
Kevin Clarke

Caritas Internationalis reports that the number of those in need in South Sudan increased dramatically in the past few months as the result of continuing drought. According to a Caritas situation report, the drought has caused widespread crop failure, acute water shortages and a sharp fall in agriculture and livestock productivity that “have had a devastating impact on food security and nutrition.”

The faith leader’s statement calls for prayer but also practical and immediate assistance for those threatened by starvation and conflict, urging donations and pressure on Canadian political leaders to do more to coordinate a multilateral response to the crisis and a cessation of the violence in South Sudan and Yemen.

“Ours is the insistent call for peace and the need to protect the vulnerable,” the Canadian faith leaders say. “The protection and promotion of human dignity are foundational elements of all our faith communities. Willful indifference towards violations against human dignity is always wrong, at all times and in all places.”

Pope Francis releases new letter on liturgy: Catholics need a better understanding of Vatican II’s reforms
The “sense of mystery” Catholics should experience at Mass is not one prompted by Latin or by “creative” elements added to the celebration, but by an awareness of sacrifice of Christ and his real presence in the Eucharist, the pope said.
Cindy Wooden - Catholic News ServiceJune 29, 2022