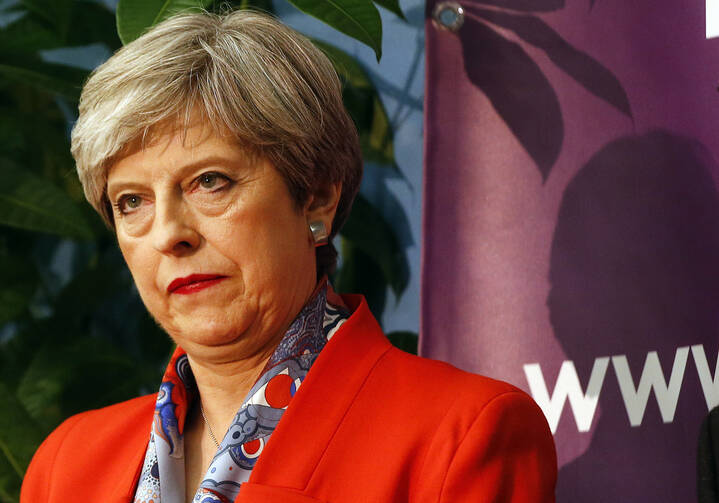 What is the goal of terrorism? According to British Prime Minister Theresa May, who is now putting together a coalition government after the Conservative Party lost their governing majority, terrorists seek to “silence our democracy.” But she also suggests that a proper response to terrorism is to redefine or abridge human rights—which, by her own logic, actually does more to advance terrorist goals than it does to thwart them.

A universal goal of terrorists is to maximize chaos. It should come as no surprise, then, that a recent string of terrorist attacks in the United Kingdom—two in London and one in Manchester—were carried out in the run-up to the June 8 general election, a time rife with tension. In response to these tragedies, the country has shown characteristic courage and solidarity, honoring the lives lost with large-scale vigils and, in the case of Manchester, a benefit concert, and speaking out about a refusal to be overwhelmed by fear.

Initially, Ms. May appeared to contribute to this solidarity. “Everybody needs to go about their lives as they normally would,” she said in an address the day after the June 3 attacks. “Our society should continue to function in accordance with our values.”

Ms. May’s argument against the Human Rights Act, as articulated in direct response to a terrorist attack, and so close to Election Day, is distracting at best and dangerous at worst.

For Ms. May, however, it seems these values do not include a complete bill of human rights. On Tuesday she said that she wanted to make it easier to deport foreign terror suspects and to restrict the freedom and movement of terror suspects “when we have enough evidence to know they present a threat but not enough evidence to prosecute them in full in court.” Ms. May did not specify the terms of these restrictions. The corker: “If human rights laws stop us from doing it, we will change those laws so we can do it.”

As shocking as Ms. May’s statement may sound, her stance is not new. She said as early as 2011 that the European Human Rights Act “needs to go,” primarily so that deportations can be made more easily, and a promise to repeal the act in favor of a British Bill of Rights was part of the Conservative manifesto for years. Although her party’s most recent manifesto pledged not to abandon the European Convention on Human Rights, Ms. May’s comments suggest leaving is not off the table.

Ms. May’s argument against the Human Rights Act, as articulated in direct response to a terrorist attack, and so close to Election Day, is distracting at best and dangerous at worst. Terrorism in the United Kingdom cannot be solved by deportations because it is so often homegrown: In each of the terrorist attacks of the last three months, at least one key actor was a British national.

In shifting attention to the supposed limitations of the Human Rights Act, the prime minister may have been trying to distract from her own record. Since 2010, when Ms. May became home secretary, the ranks of police in England and Wales have fallen by 19.5 percent, which arguably has left the United Kingdom more vulnerable when terrorist attacks take place. The Guardian also recently reported the May government may be trying to quash a long-delayed report on the foreign funding of terrorist groups in Britain.

Most damningly, Ms. May’s willingness to bend human rights laws plays into the hands of the terrorists who are so doggedly pursuing chaos, and not incidentally the demise of liberal democracy, in the West. Democratic values, which Prime Minister May herself said must be upheld in the wake of terrorism, have human rights at their heart—even if the person who leads the United Kingdom will not protect them.