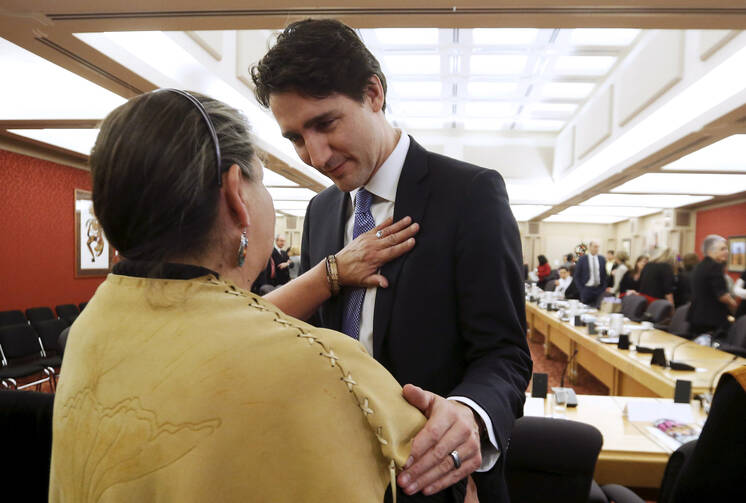 Prime Minister Justin Trudeau of Canada greets a woman upon the release of the Truth and Reconciliation Commission's final report in Ottawa in 2015. (CNS photo/Chris Wattie, Reuters)

Prime Minister Justin Trudeau said he urged Pope Francis to formally apologize for the Catholic Church’s role in mistreatment of Canada’s indigenous communities, making the request during his meeting with the pope on May 29. Though a formal papal apology has not yet been issued, Mr. Trudeau’s request comes after a variety of attempts on the part of Catholics in Canada and the Vatican to address the legacy of residential schools, where indigenous children who had been removed from their communities were subjected to heavy-handed assimilation efforts and, in many cases, sexual, physical and emotional abuse. While the schools were financed by the government, most were administered by churches; they were founded in the late 19th century and began to shut down in the 1970s.

Several religious communities and Catholic organizations, including the Jesuits, have issued their own apologies and statements of reconciliation. While the Canadian Conference of Catholic Bishops has expressed solidarity with indigenous people in Canada, it has not issued a direct apology.

On its website, the conference highlights apologies made by particular Catholic communities but says each “diocese and religious community is legally responsible for its own actions. The Catholic Church as a whole was not associated with the Residential Schools, nor was the Canadian Conference of Catholic Bishops.”

“Even though there have been other statements and meetings, [a papal] apology here, in Canada, to survivors of residential schools would mean a great deal,” says John Meehan, S.J., president of Campion College in Regina, an institution that has tried to cultivate a relationship with indigenous peoples. Given the spirit of dialogue and encounter encouraged by Pope Francis, Father Meehan says, it would be particularly meaningful “for the pope to come and embody that spirit on Canadian soil.”

Catholic orders ran many of the schools, which separated indigenous children from their families and were designed to strip them of their languages and cultural traditions.

Canada’s Truth and Reconciliation Commission, which aimed to document the stories of indigenous students in the residential schools and renew relationships between indigenous peoples and other Canadians, ended a five-year mandate in 2015 with a 94-point document titled “Calls to Action.” Because Catholic orders ran many of the schools—which separated indigenous children from their families and were designed to strip them of their languages and cultural traditions—many of the recommendations are addressed specifically to the church.

Among them is a call for an apology from the pope to be delivered in Canada. It refers to a 2010 apology made by Pope Benedict XVI to Irish victims of abuse as an example. The commission also says the apology should be made within a year of the release of “Calls to Action.”

That deadline having passed, indigenous, ecclesial and political leaders are still looking for a formal apology in Canada. But there have already been some papal statements approximating the apology sought by “Calls to Action.”

Pope Benedict XVI expressed “sorrow” for the abuse that occurred in the residential schools but did not offer a formal apology.

In a private meeting with an indigenous delegation from Canada in 2009 at the Vatican, Pope Benedict XVI expressed “sorrow” for the abuse that occurred in the residential schools but did not offer a formal apology. And Pope Francis, during a visit to Bolivia in the summer of 2015, offered an apology and asked forgiveness for the more general actions of the Catholic Church against indigenous peoples during the European colonization of the Americas.

“A friend of mine traveled to Bolivia just to hear the pope say this,” says Father Meehan. “She broke down in tears. It made her want to go back to the church.” Later that fall, however, Pope Francis canonized the missionary Junipero Serra, controversial for what critics say is a record of abuse toward indigenous peoples in North America. (Serra’s defenders disagree.)

“The same aboriginal person who loved the pope now hated the pope,” he recalls. “I’m just talking about one person but one who represents others. Many feel they get mixed signals from the church. They want to know the church is an ally in the struggle for healing and reconciliation.”

The politics of a papal apology are complicated. Romeo Saganash, a Cree member of Canada’s Parliament who is himself a survivor of a residential school in Quebec, criticized Mr. Trudeau’s request, telling the CBC, “What the prime minister needs to do is act on the things he needs to act on here in Canada rather than begging the pope to apologize.” Indigenous groups have criticized Mr. Trudeau for being slow to act on campaign commitments to address problems in their communities, like high suicide rates and toxic water.

A recent ad limina visit to the Vatican by western Canadian bishops suggested a possible papal visit to Canada as early as 2018 or 2019. On their visit, the bishops spoke with Pope Francis about the call for a papal apology in particular, and Archbishop Don Bolen of Regina said the pope was attentive when talking about the plight of indigenous peoples in Canada. Other groups of Canadian bishops also talked about indigenous issues on their ad limina visits. A papal visit would require an invitation from the Canadian Conference of Catholic Bishops, however.

Father Meehan says that in the meantime, if Catholics “can adopt the spirit of Pope Francis, a culture of encounter and dialogue, and apply it to our relationship with indigenous peoples, we could have a very bright future.” He also says that if Catholics hold on to older prejudices and practices they might lose the trust of indigenous peoples, and he stresses the importance of the current moment.

“I feel it’s a bit of a crossroads,” he says. Though facing up to the legacy of residential schools is difficult, for Father Meehan the two paths forward are clear. “A church of mercy or a church of self-preservation. We have an opportunity to decide [which] we want to be.”

To describe young people who went to the residential schools as "survivors" is buying into secular media hysteria. These same media and Justin Trudeau would like the Pope to come to Canada and apologize for work that ended more than 50 years ago. If that's the case, why do not these same media and same Justin Trudeau demand similar apology from Queen Elizabeth. After all she is head of the Anglican church some of whose members were involved with residential schools. Current media hype is essentially anti-Catholic.

"They [the schools] were founded in the late 19th century and began to shut down in the 1970s."

So how does the rate of crime, suicide, addiction etc among Canadian indigenous people today, compare with corresponding rates prior to 1970? And if there has been an increase then who is responsible? Is it Prime Minister Justin Trudeau and his party?