A pilgrimage for indigenous rights mobilizes faith communities in Canada

A pilgrimage for indigenous rights mobilizes faith communities in Canada 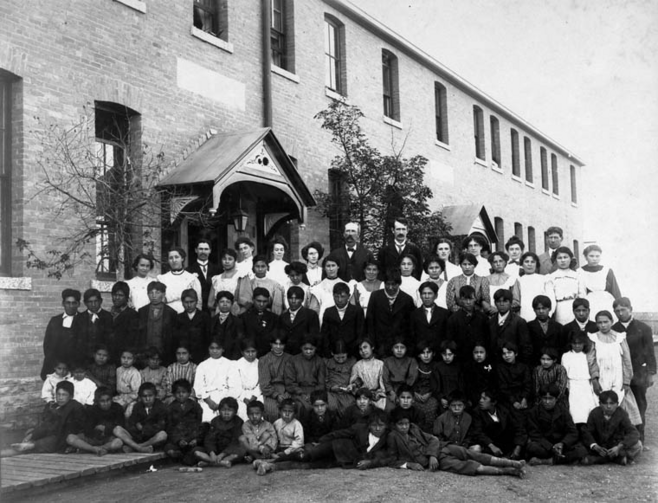 Lots of people know about Spain’s El Camino de Santiago pilgrimage, says Steve Heinrichs, director of Indigenous Relations at Mennonite Church Canada. “But to do pilgrimages in these lands that some call Canada, that’s a strange thing.” That is not to say that there are no pilgrimage sites in Canada; pilgrims may journey to the Oratory of Saint Joseph in Quebec or to Martyr's Shrine in Ontario, among others. But what Mr. Heinrichs has in mind is unique.

From April 23 to May 14, over 40 pilgrims will take part in a “Pilgrimage for Indigenous Rights,” a 22-day walk from Kitchener, Ontario, to the nation’s capital, Ottawa. The walk, which is over 300 miles, is designed to bring the struggle and history of indigenous peoples in Canada to the attention of Christian communities.

Organized by Mennonite Church Canada, Christian Peacemaker Teams and a network of indigenous and ecumenical groups, the idea for the pilgrimage emerged as an attempt to raise awareness about the United Nations Declaration on the Rights of Indigenous Peoples (UNDRIP). “We have indigenous friends who really feel the [declaration] is very important for the Canadian government,” says Kathy Moorhead Thiessen, a member of the Indigenous Peoples Solidarity Team at Christian Peacemaker Teams.

The walk, which is over 300 miles, is designed to bring the struggle and history of indigenous peoples in Canada to the attention of Christian communities.

“We wanted to do some education of our church people on what UNDRIP is, and on some of the issues that indigenous people in our land face.” In the evenings, pilgrims will not only rest at a variety of churches along the way but will also lead teach-ins at their host churches. Indigenous partners have consistently emphasized the need for church communities to teach their own members about Canada’s history with its first nations, Ms. Moorhead Thiessen says.

Leah Gazan, a University of Winnipeg instructor and a member of the Wood Mountain Lakota Nation, will walk for part of the pilgrimage. She finds the pilgrimage idea encouraging and hopes it will send a clear message to Prime Minister Justin Trudeau and the current Liberal government that “Canadians, indigenous and non-indigenous, are not okay with the willful violation of fundamental human rights.”

Ms. Gazan herself has been an ardent supporter of the proposed Bill C-262, introduced in parliament last April, which would require the Canadian government to evaluate and revise its laws so that they would be in accordance with the U.N. declaration on indigenous rights. Advocating for justice for indigenous people until recently has been a lonely process, says Ms. Gazan. “I’ve been at this my whole life. Now we’re at a time in history where we have an opportunity to reconcile, and there are Canadians who want to jump on board.”

The pilgrimage is an attempt to respond to calls to action that resulted from the Truth and Reconciliation Commission in Canada, which concluded a seven-year process in 2015. The T.R.C. aimed to document the experiences of survivors of Indian Residential Schools, which operated from 1840 to as late as 1996. At these now infamous institutions, First Nations, Inuit and Métis children were forced to assimilate with Canadian life and abandon traditional practices.

Because of their sponsorship of the schools, Christians have a unique role to play in healing the wounds of the past.

Mr. Heinrichs says there needs to be a healthy balance between not relying too much on indigenous people to “hold our hands and tell us what to do,” on the one hand, and staying accountable to indigenous communities, on the other. A “discernment circle,” made up of indigenous and non-indigenous people, has helped guide the pilgrimage organizers.

The need for broader education about indigenous struggles in Canada, especially with respect to the infamous residential schools, has become more evident in recent weeks. Senator Lynn Bayek of Ontario made headlines in March after complaining that the many negative stories about the residential schools overshadowed their positive accomplishments, a statement she stands by. But the commission found that residential schools were designed to alienate indigenous people from their local cultures.

They are widely remembered as places of physical, sexual and spiritual abuse by the indigenous people who grew up in them. Ms. Bayek has subsequently been removed from the committee for aboriginal issues she sat on at the time of her comments.

Because of their sponsorship of the schools, Christians have a unique role to play in healing the wounds of the past. “We wanted to make this as intentionally ecumenical as we could,” Mr. Heinrichs says. “I wanted to have a whole range [on the pilgrimage], everything from mainline churches to more conservative evangelical churches, just to nurture the dialogue.” But, he acknowledged, “we haven’t been as successful at that as we hoped.”

Mr. Heinrichs says a lot of the host congregations for the pilgrimage come from the United Church of Canada and the Anglican Church. He says these denominations appear especially ready to have conversations about the treatment of indigenous people, but a variety of other Protestant denominations will host pilgrims, too. While the organizers reached out to several Catholic parishes, none were able to host pilgrims along the way, though Mr. Heinrichs emphasized that the scheduled teach-ins are open to all people in the areas where they will be held.

Ms. Gazan says the pilgrimage efforts have already helped her own reconciliation with the Mennonite community, which is prominent in Manitoba, where she lives. Racism against indigenous people can be intense in Mennonite communities, Ms. Gazan says. She points to a history of wrongful settlement by Mennonites on indigenous land without the consent of indigenous people as an unresolved injustice. Yet, Ms. Gazan says, she sees that Mennonites are trying to come to terms with these issues. “I think that’s really indicative of truth being first in the Truth and Reconciliation Commission, being truthful about the situation in which we find ourselves.”

People may go on pilgrimages to Jerusalem and the like, Mr. Heinrichs says, but the T.R.C. is inviting Canada’s faith communities to reimagine and rediscover who they are in relationship with each other and indigenous people.

Ms. Moorhead Thiessen says one of the recommendations that emerged from the discernment circle is that it was important to make contact not only with faith communities, but with indigenous communities along the way of the pilgrimage. That poses a logistical problem since a lot of the indigenous communities are far away from the walking path. Still, she says, organizers are making an effort to connect.

“I’ve seen more on-the-ground action from churches than from the current government,” Ms. Gazan says. “The government could look to churches as an example of how to move forward in a meaningful way.” She says apologies are only as good as the actions that follow, and she appreciates the attempt by faith communities, like the ecumenical advocacy group Kairos, to change policies and organizational structures to honor the T.R.C. Individuals, too, she says, need to look at how their daily lives assist or perpetuate infringements on indigenous rights and take action.

Mr. Heinrichs says about half of the pilgrims have committed to the entire walk and half will join for sections of it. He hopes the effort will prove “a fragile gift to indigenous friends.”

“We’re having conversations with groups of people and we’re walking,” he says. “I think you have to be people of faith to believe [in the power of] something like that.”

This article also appeared in print, under the headline “A pilgrimage for indigenous rights mobilizes faith communities in Canada,” in the May 1, 2017, issue.