Paris Agreement or not, ‘Laudato Si’’ moves ahead in the Diocese of Monterey 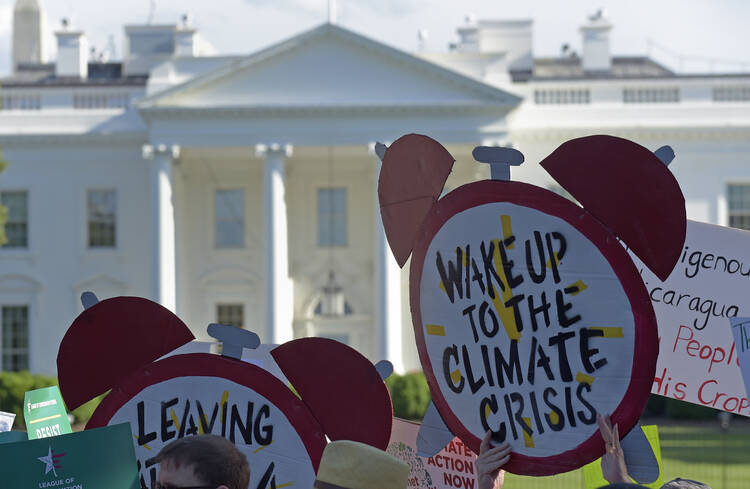 Protesters gather outside the White House in Washington on June 1 to protest President Donald Trump's decision to withdraw the Unites States from the Paris climate change accord. (AP Photo/Susan Walsh)

It has been two years since Pope Francis released his encyclical “Laudato Si’: On Care for Our Common Home,” and the response among U.S. Catholics, while generally supportive, has not been unambiguously so. Just last November, over 50 percent of white Catholics voted for Donald J. Trump, a climate change skeptic. On June 1, President Trump announced the United States would withdraw from the Paris climate agreement, an accord adopted in 2015 by a remarkable 195 of the world’s 197 countries. (Only Syria, distracted by its civil war, and Nicaragua, arguing for a stronger agreement, opposed it.)

But in parts of the U.S. church the pope’s encyclical has sparked creativity and innovation with impacts not so easily set aside. One such experiment in California that the Vatican itself highlighted is the Diocese of Monterey’s advocacy of Community Choice Energy.

In 2002, after a multi-year crisis of rolling blackouts that led then Governor Gray Davis to declare a state of emergency, the California legislature passed a bill allowing cities and counties to contract independently with energy providers of their own choosing, at rates and with a mix of renewable and non-renewable energy sources that they set themselves. Over the last 15 years, seven such Community Choice agencies have formed.

In parts of the U.S. church 'Laudato Si'' has sparked creativity and innovation with impacts not so easily set aside. One such experiment is the Diocese of Monterey’s advocacy of Community Choice Energy.

In the Diocese of Monterey, where some 200,000 Catholics live in four different counties, Bishop Richard J. Garcia had instituted a diocesan-wide climate campaign to consider concrete actions the diocese could take in response to “Laudato Si’.” He was inspired by the pope’s words and also by the realities of his diocese; five years of heat and drought had been brutal for farmers and their workers, most of whom are Mexican. Recent months saw three years worth of rainfall, causing floods, mudslides and the loss of homes and threatening the viability of the area’s drinking water.

Deacon Warren Hoy, who oversees the diocese’s environmental portfolio, says: “People [here] were feeling climate change in their day-to-day lives; the weather was affecting the way they live. So ‘Laudato Si’’ was not some weird thing that the pope wanted to talk about; it was an actual, physical, right-here-in-my-world issue.”

But like most U.S. dioceses, Monterey has limited resources. In addition to administering the environmental campaign, Mr. Hoy was responsible for everything from prison ministry and service to the homeless to the protection of children and young people. Clean energy options, both for the 46 parishes and 18 schools of the diocese and the broader community, seemed an obvious place to start, but, he says, “I had no clue how to do that.”

Meanwhile, in nearby Santa Cruz, the Romero Institute, an advocacy organization named after Salvadoran Archbishop Óscar Romero and dedicated to serving underprivileged communities in California, had decided in light of “Laudato Si’” to pivot towards advocacy for Community Choice Energy. The non-profit Monterey Bay Community Power had a proposal on the books. It represented the first multi-county effort in the state—one that could potentially benefit 285,000 people both economically and environmentally by allowing them to direct more of their energy consumption to clean renewables.

In the diocese the institute found an unexpectedly eager partner. Bishop Garcia publicly endorsed the M.B.C.P. proposal and called on his priests and pastors to get their parishioners involved. He also allowed representatives of the Romero Institute to speak after Masses, an action that the institute’s deputy director Daniel Paul Nelson believes allowed them to reach some 30,000 of the 40,000 Catholics attending Masses in Monterey on any given weekend.

Almost 6,000 Catholics ended up signing individual letters of support for the M.B.C.P., which were then presented to the Monterey County Board of Supervisors by Mr. Hoy at a public hearing. The county went on to accept the proposal as did almost every other local jurisdiction. Of the 270,000 ratepayers now in the M.B.C.P., Mr. Nelson estimates that 120,000 to 145,000 came on board as a result of the action of motivated Catholics.

A major takeaway for the diocese has been the value of giving people in the pews the opportunity to get involved. “When this came along our parishioners said, ‘Yes, this is what I’ve been waiting for,’” Mr. Hoy remarks. “They had this desire to respond to Pope Francis; they saw that he was speaking the truth.”

Working with the Romero Institute has brought other benefits as well, including a relationship with the energy efficiency firm MYNT Systems. Building by building, MYNT has evaluated the energy use of the diocese and made recommendations that the diocese has been quick to implement. Parishes are beginning to install solar panels, as well. Bishop Garcia’s hope is that eventually every diocesan building will be solar-powered, a move that could save the diocese millions of dollars.

The biggest takeaway of all might be that Catholic dioceses can make a huge difference in their local communities on issues beyond the standard topics of religious freedom, sexual ethics or the sanctity of life.

Bishop Garcia suggests a slight recasting of that characterization. “This is a life issue,” he told me this week. “It’s our life. We want to survive here.”

The US was the only country that was expected to reduce emissions and then on top of that donate large amounts of money to other countries. Meanwhile Germany, China, India and other countries use especially dirty coal to run their grid and are required to do nothing. This agreement was intended to punish the United States. So ask why did Obama agree to such a onerous agreement?

This "virtue signaling" by the authors here and various Catholics around the US will have zero effect on helping the climate and if they succeed it will probably exacerbate the climate as people lose jobs and and are forced to resort to less efficient energy.

By all means choose the source of energy one wants as an individual but with the understanding that forcing all to comply will cause mass dislocation and probably a worse climate situation and definitely a far worse economic situation.