Pope Francis is the most-followed world leader on Twitter—but Trump is closing in. 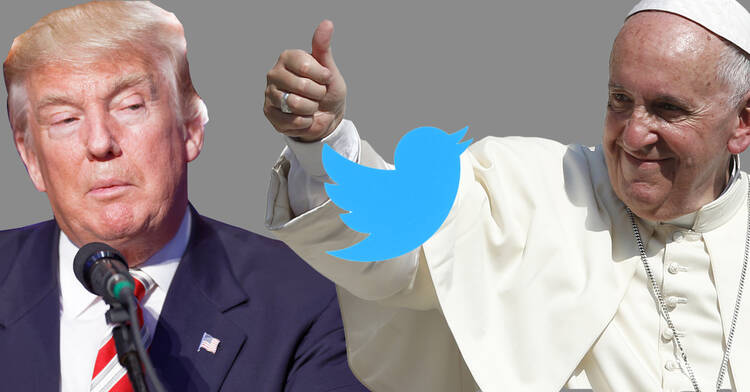 Watch out Pope Francis, President Trump is coming for you—at least in terms of popularity on Twitter.

The pope is currently the most-followed global leader on the social networking platform, with close to 34 million followers spread across nine language accounts, according to analysis from Twiplomacy, a group that tracks the social media use of world leaders. Mr. Trump comes in a fairly close second, with about 30 million followers.

But the gap between the two men is shrinking fast.

Watch out Pope Francis, President Trump is coming for you—at least in terms of popularity on Twitter.

Mr. Trump, one of just a handful of world leaders to manage a robust personal Twitter account, has grown his account by about 5 percent each month since his January inauguration. If he maintains that pace, he will overtake the pope by the end of August, the report says.

Pope Francis, whose tweets are often taken from his remarks or statements, became the most followed world leader after former President Barack Obama left office. Mr. Obama, a relatively early adopter of Twitter among political leaders, had close to 80 million followers before he departed the White House.

When it comes to Twitter influence, measured in likes and shares, the report slices the data in a couple different ways.

But the president tweets far more often than the pope, who usually sends just a few messages each week. Mr. Trump, on the other hand, often publishes several tweets in rapid succession, often early in the morning.

That means the men are essentially tied when it comes to the rate at which their followers share their tweets. (Both men fall well behind King Salman of Saudi Arabia, who has about six million followers but whose tweets usually generate close to 150,000 re-tweets, far outpacing Mr. Trump’s 13,000 re-tweets and the 10,000 for the pope’s Spanish-language account.)

The president’s tweets routinely attract global media attention, a phenomenon on full display earlier this week when Mr. Trump published a late-night tweet that contained a fragment with a strange typo. The tweet, which remained on his personal account for several hours before being deleted, contained the letters “covfefe,” which became the most talked about subject on Twitter for several hours.

Mr. Trump has tweeted about the pope a handful of times, including last year when he called the pope “disgraceful” after interpreting remarks Francis made about border walls as a personal attack.

The pope, meanwhile, has never mentioned Mr. Trump on Twitter. But the report notes, “Pope Francis’s two most popular tweets are clear references to Donald Trump’s policies without mentioning the U.S. President.”

I invite you not to build walls but bridges, to conquer evil with good, offence with forgiveness, to live in peace with everyone.

How often in the Bible the Lord asks us to welcome migrants and foreigners, reminding us that we too are foreigners!

Pope Francis and Mr. Trump met in Rome last month, and the pair discussed issues on which the Vatican and the United States might collaborate, including efforts to end Christian persecution in the Middle East and curbing human trafficking. (The Vatican’s statement said church leaders also discussed immigration with Mr. Trump, although the White House statement did not include the topic in its own statement.)

Their differences aside, Mr. Trump offered his own thoughts on the meeting. His method of communication? Twitter, of course.

Honor of a lifetime to meet His Holiness Pope Francis. I leave the Vatican more determined than ever to pursue PEACE in our world. pic.twitter.com/JzJDy7pllI

Michael J. O'Loughlin is America's national correspondent and author of The Tweetable Pope: A Spiritual Revolution in 140 Characters.

Popularity on Twitter is hardly a good way to evaluate the worth of someone's thoughts. Pope Francis is a wise and admired world leader. Donald Trump is an abominable man with a talent for publicity. Twitter only adds up numbers, it does not evaluate content.