Channeling JFK: To What Great Cause is This Generation Called? 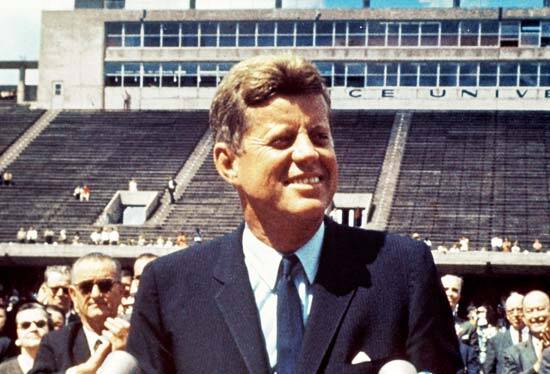 Yesterday I blogged about TED talks and raised the matter of integration and synthesis, noting that the proliferation of knowledge leaves educators with a task:

That task could be articulated in different ways, but essentially it comes down to how we assimilate, interpret and, if necessary, re-route the data that stream endlessly into minds and culture. People today are awash in cool stuff, intriguing possibilities and mesmerizing tales of the future. But the significance of this information is not self-evident. Each talk or dazzling theory is like a single chapter from a different book, and it’s up to teachers – and all leaders – to steward this material into a coherent, unifying narrative, to anchor intellectual achievements in a vision that safeguards human dignity and bestows meaning.

To see how that’s done, we might return to something like the speech that President John F. Kennedy gave in 1962, when he announced that the United States would travel to the moon.

Speaking at Rice University, Kennedy began on a note of humility, then briefly summarized some of the signature intellectual achievements of human history, noting, for example, Newton’s work in mathematics and the discoveries of electricity and penicillin.

But Kennedy didn’t just offer a pedigree of genius. Instead, he cited these breakthroughs to preface his bold proposal for exploring space. Linking the lunar visit to the ideals that have animated American history, Kennedy emphasized the need to ensure peace, create jobs, defend freedom and achieve something extraordinary.

“We set sail on this new sea,” said President Kennedy, “because there is new knowledge to be gained, and new rights to be won, and they must be won and used for the progress of all people.”

In making his announcement, President Kennedy not only anchored and unified; he also, in effect, issued a call: a call for 20th-century dreamers to direct emerging technologies toward noble ends.

See the bigger story of your work, Kennedy was saying. Be accountable to the past and the future.

This leadership, and this kind of integrating work, is difficult but no less important today. With approximately 1700 TED talks, millions of YouTube videos and countless other resources generating more information than we can process, these questions follow: To what mission or cause is this generation called? Kennedy rallied brilliant minds to the cause of space exploration—not because it was easy, he famously said, but because it was hard. What, today, is the next frontier? What heroic and awesome difficulty is this generation's moon landing?

And in the midst of breakthroughs and additional progress, to whom and to what must we remain faithful?

These inquiries have no easy answers, but they must be asked anew. Otherwise, in the race to spread ideas, we will one day find that we don’t know where we’re going or who we’ve become.