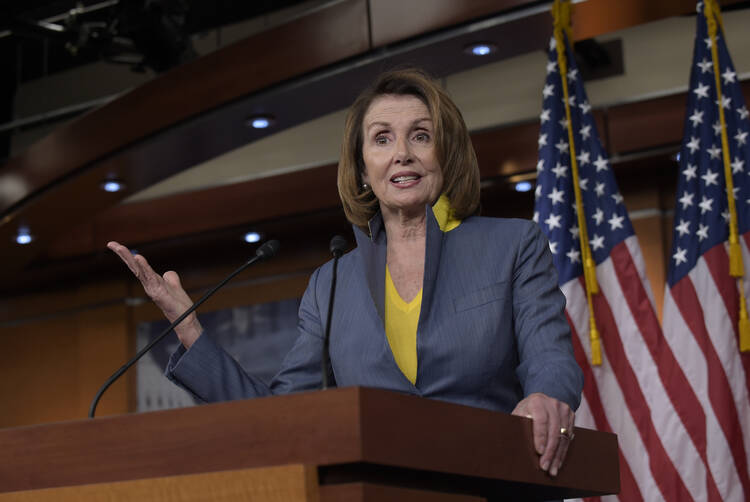 A leading Democrat wants pro-life Americans to know they are welcome in the party, hoping to end weeks of debate about whether support for abortion rights is a litmus test for party support.

“I grew up Nancy D’Alesandro, in Baltimore, Maryland; in Little Italy; in a very devout Catholic family; fiercely patriotic; proud of our town and heritage, and staunchly Democratic,” House Minority Leader Nancy Pelosi told the Washington Post in an interview published Tuesday. “Most of those people—my family, extended family—are not pro-choice. You think I’m kicking them out of the Democratic Party?”

Her comments follow a wave of criticism from pro-life Democrats after Tom Perez, chair of the Democratic National Committee, made comments implying that Democratic candidates who do not support abortion rights would not be eligible for support from the party. “I won’t let anyone get in the way of our fight to protect a woman’s right to choose,” said Mr. Perez in a statement on April 20.

Most of those people—my family, extended family—are not pro-choice. You think I’m kicking them out of the Democratic Party?

Ms. Pelosi, an ardent supporter of abortion rights and a practicing Catholic, suggested that it was not the case that pro-life Democratic candidates were unwelcome in the party. But she also expressed skepticism that a Democrat opposed to abortion would make it very far in the political process.

“Can somebody get the nomination? I don’t think so,” she said. “I don’t think that you’ll see too many candidates going out there and saying, ‘I’m running as a pro-life candidate.’”

She also suggested that controversy about abortion, at least in the Democratic Party, is “kind of fading as an issue.” She implied that most Democrats who describe themselves as pro-life do not want abortion to be outlawed, but disagree about how far along in a woman’s pregnancy the procedure should be allowed.

Ms. Pelosi conceded that while most candidates seeking support from the party would support abortion rights, “It depends on where [in the United States] you are talking about.”

That’s an important concession, one that cuts to the genesis of the controversy.

Last month, Vermont Senator Bernie Sanders and Keith Ellison, a Minnesota congressman and deputy chairman of the Democratic National Committee, campaigned for Heath Mello, a Democrat trying to unseat the Republican mayor of Omaha. Some pro-choice leaders took issue with the endorsement, citing Mr. Mello’s past support for legislation advocated by some pro-life activists.

Following Mr. Sanders’s campaign event for Mr. Mello, Ilyse Hogue, the head of NARAL Pro-Choice America, said in a statement that the event was “not only disappointing, it is politically stupid.”

That prompted Mr. Perez, head of the D.N.C., to say in a statement that every Democrat “should support a woman’s right to make her own choices about her body and her health,” dubbing that position “not negotiable.”

Even some of the nation’s top bishops weighed in on the party’s internal dispute. Cardinal Timothy Dolan of New York called Mr. Perez’ statements “very disturbing” and “intolerant,” while Philadelphia’s Archbishop Charles Chaput interpreted them as “celebrating” killing.

In her interview with the Post, Ms. Pelosi suggested the only litmus test for Democratic candidates is support for working families.

Ms. Pelosi’s comments echo those made by other Democrats in recent days, who seemed to bristle at Mr. Perez’s idea that pro-lifers were excommunicated from the party.

“I couldn’t disagree more with what Tom Perez said, I think it’s not correct that our party should have litmus tests about who wants to join our party,” Senator Claire McCaskill of Missouri, who supports abortion rights, told the Atlantic on April 27. “We may disagree on various issues, and I just don’t think we should say ever anyone is not welcome in our party based on one of those issues.”

The head of the Democratic Party in Arkansas also recoiled at the notion that pro-life Americans were not welcome in the party.

“The only litmus test we care to take is whether what we do is in the best interest of the people we serve,” Rep. Michael John Gray told the Arkansas Democrat-Gazette. “Ideological purity leaves little room for compromise on our most important issues.”

Ms. Pelosi, meanwhile, appeared to lay blame at the hands of pro-life Catholics and Evangelicals for President Trump’s surprise victory in November, suggesting that those voters overlooked their other concerns such as immigration and climate change.

“You know what? That’s why Donald Trump is president of the United States—the evangelicals and the Catholics, anti-marriage equality, anti-choice. That’s how he got to be president,” she said. “Everything was trumped, literally and figuratively by that.”

Still, she recalled with fondness her work with Catholic sisters in the United States to help pass the Affordable Care Act in 2010. Their support, cited as instrumental in helping pass the law, came over objections from U.S. bishops, who are today urging Republicans not to repeal the law without guaranteeing Americans will be able to retain health insurance.

"Ms. Pelosi, an ardent supporter of abortion rights and a practicing Catholic,"
a classic oxymoronic description.
Ms. Pelosi, Catholic politicians and judges, need to be warned by their Cardinals or Bishops that by calling attention to their Catholic faith and in the same breath voicing support for abortion rights, same sex marriage and other acts contrary to Catholic teachings a public act of scandal — as defined in the Catechism of the Catholic Church (Nos. 2284-6) — is committed. Paragraph 2286 is directly applicable to people in political positions. It reads: "Scandal can be provoked by laws or institutions, by fashion or opinion. Therefore, they are guilty of scandal who establish laws or social structure leading to the decline of morals."

There's another option: Don't be so easily scandalized.

Another voice from "where ignorance is bliss 'tis folly to be wise" Chinese menu "its only a sin if I think its a sin, what Catechism" faction of the "Church".

Of course pro-life Americans are welcome in the party. We just don't want them running for office as Democrats, taking away other people's right to make their own choices.

You don't want them running for office? That's very undemocratic.

Crystal
That would be: " Give us your vote, but shut up!"
That is suppose to be welcoming?

Either "Catholic" Nancy Pelosi is incredibly hypocrite or must be immediately checked for dementia.

"No one should fear that those entrusted to protect them will harm them without accountability. Freedom from violence is reproductive justice"

Pro-life and pro-choice are not opposites. This combination is not for abortion, but for reducing the rate of abortion by other than legal means, choosing not Caesar's way but Jesus' way. Pro-life/pro choice is for supporting all pregnant women, especially those in poverty, so that pregnant women are more able to choose life. It seems that many who are pro-life and not pro-choice are opposed to government programs that assist women in poverty, such as WIC, SNAP, TANF and Medicaid. Pro-life/pro-choice folks favor these programs, as Pope Francis does.

The big dividing point of course is the law. Should women be forced by it? Should their womb and its developing life within have more legal status than they have? In medical cases where both will die if nothing is done, and the woman will live but the fetus will die if something is done, the choice is to let both die?

It seems the best way to care for an unborn is to care for the woman doing the carrying, treating her as the person who best knows her particular situation and who we hope and pray will choose a new life. If she doesn't, we are part of the failure. We are implicated. Especially if we are for cutting rather than strengthening her safety net, her support system. IMHO.

The widening gap between Democrats and Republicans on abortion is following the same pattern between the Democrats and the Whigs/Republicans on slavery in the nineteenth century. As more and more information comes out about what is happening and what positions each party has on the matter, the people move their allegiance. People have a great capacity to fool themselves for a long time.

Pelosi's statement is pure political expediency, as she just wants to fool anti-abortion voters to vote for her pro-abortion policies. And, they can come in as long as they don't seek leadership roles. Perez was caught being honest, when a lie would have done.

So according to Ms. Pelosi, pro-life proponents are welcome within the DP --we want your vote, we want your money -- but don't have any designs on seeking elective positions (either within the party or for political office) if you don't support the stranglehold NARAL currently has on the party. And this non-debatable policy position is somehow enticing and welcoming? My separation from the DP is 99.9% complete, though I'm not drawn into the orbit of the RP with its narrow focus on what "pro-life" includes. The national and state elections last fall highlighted the decreasing fortunes of the DP at the executive and legislative levels. Though it pains me to say it, I think the DP is in for an even rougher time for the foreseeable future unless it creates a truly welcoming space for pro-life Democrats that does not impose limits on advancement and on the opportunity to convince others of the moral and political strength of a consistent ethic of life policy position.