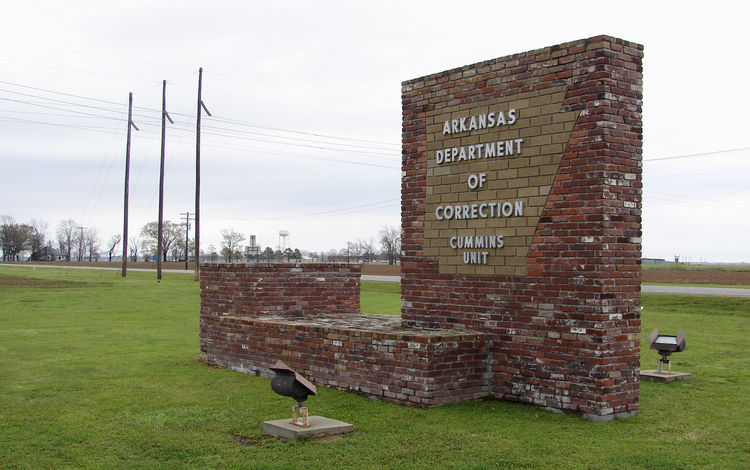 A sign for the Department of Correction's Cummins Unit prison in Varner, Ark. Seven prisoners have been scheduled to die at the prison in April as Arkansas rushes to use an execution drug that expires in May. (AP Photo/Kelly P. Kissel)

Beginning on Easter Monday, April 17, the state of Arkansas plans to execute seven men currently on death row in an 11-day rush before the end of the month. Human Rights Watch describes the plan as “a flurry of state-sanctioned killings unseen in the modern history of the U.S. death penalty.”

The executions would be the first in Arkansas in 12 years. Remarkably, the death sentences are being pushed through this month in an effort to beat the May expiration date for the state’s supply of midazolam, a controversial sedative that is one of three drugs used in lethal injections. H.R.W. reports that Arkansas officials do not know when they will be able to obtain a new supply of midazolam.

Bishop Dewane charged that “the schedule of executions was not set by the demands of justice, but by the arbitrary politics of punishment.”

Critics say the drug should not be used in the first place since it malfunctions too frequently. And in an open letter to Arkansas Governor Asa Hutchison, former corrections administrators warned: “We believe that performing so many executions in so little time will impose extraordinary and unnecessary stress and trauma on the staff responsible with carrying out the executions. We are also concerned that the successive planned executions create an unacceptable risk of unconstitutional error and will undermine the public’s faith in the professionalism of the prison staff and administration.”

Predictably the rush of executions has been condemned around the world. This morning the U.S. bishops conference joined calls for the serial executions to be abandoned.

Bishop Frank J. Dewane of Venice, Fla., chairman of the United States Conference of Catholic Bishops’ Committee on Domestic Justice and Human Development, issued a statement on April 13 joining “the Catholic community of Arkansas and people of good will across the country and around the world in urging Governor Hutchinson to reconsider this plan.”

Reminding Arkansas prison officials of Christ’s own execution as a “spotless victim” this Easter season, he said, “So often, the images of Christ’s saving action stand in contrast with the activities of the world.” Bishop Dewane charged that “the schedule of executions was not set by the demands of justice, but by the arbitrary politics of punishment.”

“This Easter, let us ask the Lord for the grace to infuse our justice with mercy,” Bishop Dewane said. “May those in Arkansas who hold the lives of these individuals on death row in their hands be moved by God’s love, which is stronger than death, and abandon the current plans for execution.” Bishop Dewane asked for commutation of the sentences of those scheduled to be executed to life imprisonment.

In his statement, Bishop Dewane noted that Pope Francis called for “the global abolition of the death penalty.” In his 2015 address to the U.S. Congress, Pope Francis said: “I am convinced that this way is the best, since every life is sacred, every human person is endowed with an inalienable dignity, and society can only benefit from the rehabilitation of those convicted of crimes. . . . [A] just and necessary punishment must never exclude the dimension of hope and the goal of rehabilitation.”

The U.S. bishops have echoed this call for many years, including in their 2005 statement “A Culture of Life and the Penalty of Death.”

“It can be very difficult to think of mercy at a time when justice for unthinkable crimes seems to cry out for vengeance,” Bishop Dewane wrote. “The harm and pain caused by terrible sin is real.” But he invoked Pope Francis’ reflection that “Jesus on the cross prayed for those who had crucified him: ‘Father, forgive them, they know not what they do’ (Lk 23:34). Mercy is the only way to overcome evil. Justice is necessary, very much so, but by itself it is not enough. Justice and mercy must go together.”

How long have the prisoners been on Death Row ?

In part is this not a consequence of "Anti-Death Penalty" proponents
doing their all to make sure certain drugs are not used and if they
might be that they are unavailable ?

If you are opposed to the Death Penalty be sure to not to forget the
victims and their families - no mention of them is provided in either article in America.

Do not presume that "Life in Prison" is inherently better than
the Death Penalty - are you advocating for more human conditions
in our prisons ?