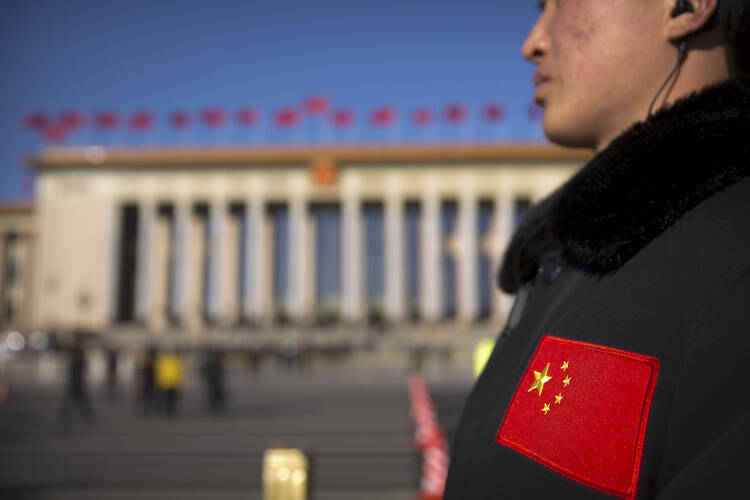 A security official stands outside the Great Hall of the People during last week's plenary session of the National People's Congress in Beijing. (AP Photo/Mark Schiefelbein)

Have you ever doubted the stories about national heroes you were told as a kid? In China, that has become a dangerous thing to do.

Chinese legislators passed the general provisions of the country’s first unified code of civil law on March 15, and they include a controversial clause that makes defaming the ruling Communist Party’s “heroes and martyrs” a civil offense.

The provisions, which take effect on Oct. 1, were adopted on the last day of the annual meeting of the rubber-stamp legislature, the National People’s Congress, with a mere 30 votes against and 21 abstentions out of 2,838 members.

Xinhua, the state news agency, applauded the new civil code as a necessary step to promote China’s rule of law and modernize state governance. It also quoted a drafter of the law, Sun Xianzhong, as saying it will enable Chinese people "to feel more secure and enjoy more equal opportunities and dignity."

But the adoption of the clause that makes people legally liable if they harm the image of Communist Party heroes drew fire among liberal scholars and lawyers.

Hong Zhenkuai, a historian, said the new clause has further stripped Chinese citizens of speech and academic freedom. He told America that the move amounts to a “literary inquisition.”

The adoption of the clause that makes people legally liable if they harm the image of Communist Party heroes drew fire among liberal scholars and lawyers.

Mr. Hong, a former editor at the political journal Yanhuang Chunqiu, found himself embroiled in a lawsuit after he cast doubts on the story of the “Five Heroes of Langya [Wolf Tooth] Mountain” in two articles in 2013. In the tale taught in schools in China for decades, five Communist soldiers valiantly fought against Japanese invaders on a mountain peak in 1941; when they ran out of ammunition, they chose to leap from a cliff rather than surrender to the enemy. Three of them died.

After studying news archives and state media interviews with the two survivors, Mr. Hong cast doubts on several details in the official version of the story—including whether the heroes leapt or slipped, the location where they supposedly jumped, the number of Japanese soldiers they supposedly killed, and whether they actually lured the Japanese to the mountain, as suggested in the tale.

Sons of the two survivors sued Mr. Wong, and last year a Beijing court found him guilty of defaming the soldiers and ordered him to apologize publicly to the descendents. The verdict said that Mr. Hong’s articles challenged a story that is an important source of “modern China’s socialist core values” and damaged the “heroic image and spiritual values” of the sacrificed soldiers, as well as “the Chinese nation’s spiritual values.” Mr. Hong appealed, unsuccessfully.

China’s top judge, Zhou Qiang, referred to the “Langya Mountain” case in a report to the National People’s Congress on March 12, saying the guilty verdict “unswervingly safeguarded the image of the heroes.”

Mr. Hong expressed dismay after the civil code was adopted on Wednesday, saying that he never expected his ordeal would have such serious consequences. The state-backed China Civil Law Society’s deputy head, Yang Lixin, made clear in an article on Monday that Mr. Hong’s court case had prompted the need for such a law.

“This is completely beyond my imagination,” Mr. Hong said. “It’s painful to watch society regress when there is absolutely nothing you can do.”

Academics and lawyers say the adoption of the draconian clause is aimed at preventing people from challenging the Communist Party’s version of history, which it regards as the source of its legitimacy. The lack of a clear definition of “heroes and martyrs” in the law and what constitutes defamation also means its application could be dangerously arbitrary, they say.

The lack of a clear definition of “heroes and martyrs” in the law means its application could be dangerously arbitrary.

“The aim is to restrict the reassessment of history through law,” said Fu Hualing, an expert in Chinese law at the University of Hong Kong. “People have to accept that those called heroes by the government are heroes.”

But Shang Baojun, a lawyer specializing in rights cases, said it was “totally unnecessary” to have a separate law protecting the reputation of “heroes,” as there is already a libel law in China. He said public and historical figures should be subject to “more scrutiny, not less” and a law like this would stifle healthy discussions.

“This only deepens the feeling that there is a strengthening of ideological control,” he said. “This is dealing yet another serious blow to speech freedom. People are being gagged.”

The Communist Party rigorously guards its version of history by banning public discussion of many events. Among them are: the anti-rightist movement in 1957, in which millions of intellectuals were sent to the countryside for hard labor; the Great Leap Forward movement between 1958 and 1961 that resulted in a famine that killed at least 30 million people; and the Cultural Revolution between 1966 and 1976 that saw millions tortured, beaten to death and committing suicide.

In 2013, an internal party edict known as Document No. 9 ordered cadres to tackle seven supposedly subversive influences on society, including “historical nihilism”—a move that effectively bans any versions of history other than the official one. A senior Central Party School official last year reported that Mr. Xi had said “hostile forces” like to use historical issues to “attack, smear and slander” the country.

In fact, as soon as he came to power, Mr. Xi told party insiders that “profound lessons” must be learned from the disintegration of the Soviet Union, blaming its collapse on a loss of political ideals and convictions.

Mr. Xi’s lack of tolerance for unorthodox versions of history was demonstrated by the demise of Yanhuang Chunqiu, a publication founded by liberal, pro-reform party elders. The 25-year-old journal, which published many eyewitness accounts that contradicted official history, was forcibly taken over by the government last summer. Mr Hong was an editor there and one of his articles that prompted the lawsuit was published in the journal.

Willy Lam, an expert on Chinese politics at the Chinese University of Hong Kong, said Mr. Xi believed that Soviet leader Nikita Khrushchev’s denouncement of his predecessor, Joseph Stalin, in 1956 paved the way for the eventual collapse of the Soviet Union—and so “he needed to preserve the embellished version of the Communist Party’s history,” including the tales of its martyrs, to burnish the party's image.

Rule of Law and other 'Western' notions are worrying Beijing. Here's why.
Hong Kong contributor

“Some scholars have exposed that many of them are actually propaganda, but Xi wants to preserve the fairy tale,” Mr. Lam said. “The party’s dirty linen mustn’t be aired.”

Mr. Hong, who adored the heroes in the Langya Mountain tale as a child, said it was ironic that many wartime heroes died fighting for their countrymen’s freedom but the new law to safeguard their images is stripping away the right to free speech.

“If the martyrs have sacrificed their lives and the people don’t even end up having freedoms, what have they fought for?” Mr. Hong asked.