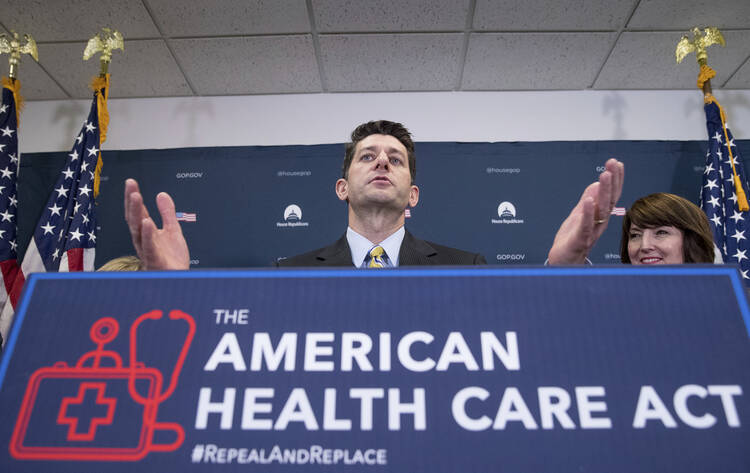 Catholic bishops expressed concern on Friday over what they dubbed “serious flaws” in a Republican-sponsored bill that would repeal and replace the Affordable Care Act, also known as Obamacare.

Writing to members of Congress, Bishop Frank J. Dewane, head of the U.S. Conference of Catholic Bishops committee on domestic justice, said that while the measure, called the American Health Care Act, or A.C.H.A., contains some “commendable” aspects, including limiting federal funds for some healthcare providers that perform abortions, it also contains “serious flaws.”

“Regarding access for those most in need, the AHCA includes changes which place many people at significant risk,” Bishop Dewane wrote. “The legislation must be modified to correct these serious flaws.”

In particular, the bishops take issue with a component of the bill that would cut back on Medicaid funding, which covers insurance for low-income Americans.

“The legislation must be modified to correct these serious flaws.”

Republican Congressional leaders have argued that their replacement for Obamacare, which has covered anywherebetween 10 and 20 million Americans since it became law in 2010, would bring down the costs of health insurance and allow more people to purchase plans on the open market.

But critics say the measure, which would end penalties for Americans who forego buying health insurance, will adversely affect poorer Americans who rely on government subsidized plans.

A recent non-partisan Congressional review confirmed those fears, projecting that up to 24 million Americans could lose insurance coverage over the next 10 years if the bill is passed.

“Proposed modifications to the Medicaid program, a vital component of the social safety net, will have sweeping impacts."

Bishop Dewane’s letter, dated Mar. 17, calls for modifications to the legislation that would protect those plans.

“Proposed modifications to the Medicaid program, a vital component of the social safety net, will have sweeping impacts, increasing economic and community costs while moving away from affordable access for all,” the letter states.

The letter notes that “struggling families” will be adversely affected by the proposal, “without clear indication of affordable, adequate coverage to replace their current options.

“Congress must rework the Medicaid-related provisions of the ACHA to fix these problems and ensure access for all, and especially for those most in need,” it continues.

Other parts of the bill the bishops take issue with include a tax credit system, in which Americans would receive tax credits to help pay for health insurance. Various analyses of the plan show that the system would benefit younger and wealthier Americans most, with higher costs expected for the poor and the elderly.

In the letter, bishops say the plan “appears to create increased barriers to affordability, particularly for older and lower-income people.”

Two Catholics in Congress traded barbs recently about the merits of the proposed legislation.

Speaker of the House Paul Ryan called the Obamacare replacement “an act of mercy” earlier this month, prompting Rep. Joseph Kennedy III todescribe the measure as “an act of malice.”

“With all due respect to our speaker, he and I must have read different scripture,” Mr. Kennedy said. “The one that I read calls on us to feed the hungry, to clothe the naked, to shelter the homeless, and to comfort the sick. It reminds us that we are judged not by how we treat the powerful but by how we care for the least among us.”

Back in January, when Congressional Republicans began crafting the bill, Catholic bishops wrote a letterurging them to ensure that Americans would not lose health insurance under any new laws. They noted in that letter that they object to certain Obamacare provisions that provide federal funds for contraception, which has resulted in lawsuits from several Catholic entities, including dioceses, universities and hospitals.

Those concerns were reiterated in the more recent letter.

“The ACA is, by no means, a perfect law,” it states. “The Catholic Bishops of the United States registered serious objections at the time of its passage.”

It says the new legislation “honors a key moral requirement for our nation’s health care policy” by “restricting funding which flows to providers that promote abortion,” a reference to an ongoing bid by some members of Congress to defund Planned Parenthood.

Still, it states that the new plan, “in attempting to improve the deficiencies of the ACA, health care policy ought not to create other unacceptable problems, particularly for those who struggle on the margins of society.”

The House of Representatives willvote on the legislation on Thursday.

The letter concludes by quoting Pope Francis, who has said health care is “not a consumer good, but a universal right which means that access to healthcare services cannot be a privilege.”

Per Joseph Kennedy III, perhaps it is time Bishops exercised excommunication for those Roman Catholics who create legislation that is not in line with the Gospel message of caring for the least among us.

Frank
Excommunication for those who support pro abortion laws as well...Or federal support of Planned Parenthood?
Once you get out "the bell, book, and candle" you had best be careful for whom that bell tolls!
Social Justice Warriors think they are wielding a single edged sword ....best they examine it closely to find all its sharp edges before they accidentally cut themselves to pieces.