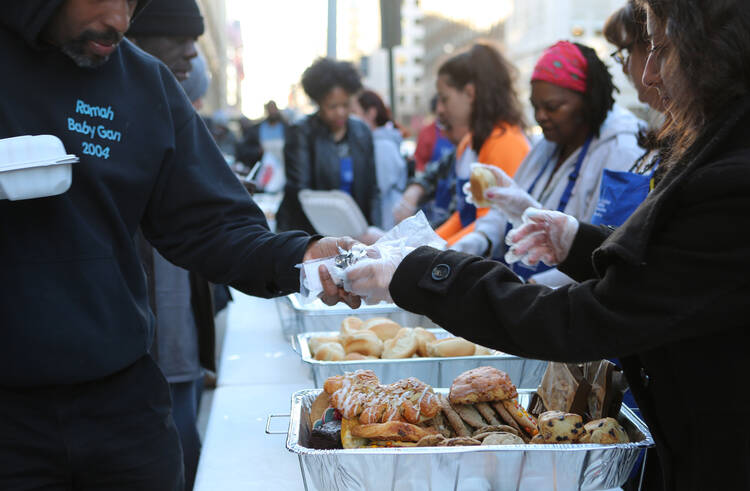 Catholic leaders reacted with skepticism to a preliminary blueprint of the budget President Donald J. Trump plans to introduce later this spring, which calls for substantial increases in military spending while slashing international aid and funds for programs to serve the poor at home.

Cardinal Timothy M. Dolan of New York, who prayed at Mr. Trump’s swearing-in ceremony in January, was one of about 100 faith leaders who signed a letter sent to Congressional lawmakers on Thursday urging them not to cut international aid.

“Matthew 25 tells us when we serve the least of these, we are serving the Lord. As people of faith, we cannot turn our back on those in desperate need,” the letter states.

“With just 1 percent of our nation’s budget, the International Affairs Budget has helped alleviate the suffering of millions; drastically cutting the number of people living in extreme poverty in half, stopping the spread of infectious diseases like HIV/AIDs and Ebola, and nearly eliminating polio. Additionally, it promotes freedom and human rights, protecting religious freedom for millions around the world,” the letter states.

"As followers of Christ, it is our moral responsibility to urge you to support and protect the International Affairs Budget."

“As followers of Christ, it is our moral responsibility to urge you to support and protect the International Affairs Budget, and avoid disproportionate cuts to these vital programs that ensure that our country continues to be the ‘shining city upon a hill,’” it concludes.

In addition to Cardinal Dolan, other Catholic signers include Bishop Gregory J. Mansour, chairman of Catholic Relief Services, Archbishop Salvatore Cordileone, head of the Archdiocese of San Francisco, and Archbishop Joseph Kurtz, the former head of the U.S. Conference of Catholic Bishops.

Other Catholic leaders expressed concern about the proposed budget’s impact on rural communities in the United States, which are struggling with higher than average unemployment rates and dealing with challenges to healthcare and food security.

Jim Ennis, the head of Catholic Rural Life, said President Trump’s priorities do not mesh with the needs facing the 60 million Americans living in rural areas.

“The challenge with rural areas is a mentality of ‘out of sight out of mind,’” he told America. “Many folks just don’t hear from rural communities about what’s happening, about issues of food insecurity, access to healthcare. Folks think of inner cities as the problems.”

The White House’s proposed budget, the details of which will not be available until later in the spring, calls for increasing military spending by about 9 percent while slashing funding for the State Department, international food assistance and grants that fund community outreach programs such as Meals on Wheels.

Specific to rural communities, the proposed budget would end funding for public broadcasting, which analysts say would harm non-urban stations most, as well as ending programs designed to make travel to rural areas more affordable and promoting development in rural areas. Rural areas supported Mr. Trump by a healthy margin in the November election.

But Mr. Ennis said he noticed that the president did not highlight rural concerns during his February address to Congress.

“In his presentation to Congress he didn’t bring up rural at all, and a lot of those rural communities are still trying to rebound,” he said.

“Under the president’s health bill, more rural people are going to be at higher risk.”

Plus, he added, the ongoing Republican drive to repeal and replace the Affordable Care Act, another campaign promise made by Mr. Trump, would also harm rural communities.

“Under the president’s health bill, more rural people are going to be at higher risk,” he said.

Mr. Ennis said that overlooking rural areas does a disservice to the nation.

“Rural communities are part of who we are as a nation. They provide food for our tables and we continue to depend upon them for natural resources. Rural America is essential,” he said. “It’s as important as it’s ever been. We just don’t pay attention to it because we never hear about it.”

Then there is the effect of the budget on the growing gap between the rich and the poor.

Sister Simone Campbell, head of Network Lobby and a frequent critic of Mr. Trump, said in a statement that the proposed budget “would harm the lives and livelihoods of Americans all across the country.”

“The president’s budget does not reflect the values and priorities of everyday Americans,” Sister Campbell continued. “It does nothing to mend the gaps in income and wealth inequality, and instead will widen the gaps between the wealthiest and those at the economic margins of our communities.”

It is an irony that some of the 51% of Catholics who voted for Trump are now regretting what he is doing. The signs were in front of their faces. They must have been so busy obsessing about their one-issue concern (or some strange notion of "change") that they bought into the president's nonsense. So much for the analytic skills of the voting majority of Catholics. It makes me shudder to think how many Catholic voters swam in their ineptitude.