A Catholic sister helped an ex-inmate get through college. Now, he's paying it forward. 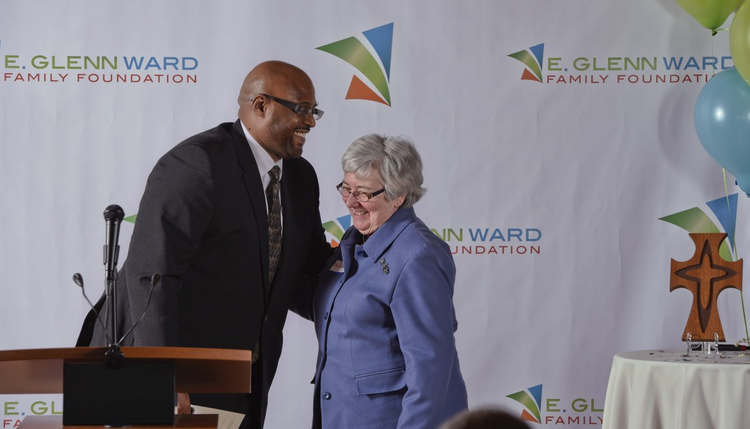 As a student at Chicago’s St. Xavier University, Dan Geiter had run out of options. He couldn’t afford tuition and he was behind on his rent and utilities. Tempted to drop out, he instead emailed some college administrators to ask for help. One answered.

Susan M. Sanders, R.S.M., a Sister of Mercy who was then the vice president for mission at the Chicago school, listened to his story. He had been in and out of the juvenile justice system since high school. In need of cash, he had been hired as a dishwasher at a local chain restaurant.

But when his background check came back and revealed his record, Mr. Geiter was fired. He was told that the only way to beat a system that makes it difficult for former offenders to escape their past was to get educated.

That’s why he was desperate to stay at St. Xavier and get his bachelor's degree: He was afraid that if he was to withdraw, he might not make it back. So Sister Sanders told him to hang tight and she would help him come up with the needed money—something she had done for many other students.

Eventually, she tracked down some donors to give some much-needed financial assistance and appealed to Mr. Geiter’s landlord’s Catholic guilt to give his tenant some time to pay his rent. When Mr. Geiter promised Sister Sanders that he would pay her back someday, she rolled her eyes.

'She saved my life, she really did,' Mr. Geiter told America.

“Daniel, nobody ever pays you back. I’m not that stupid,” she recalled telling him. “When you get the opportunity, do it for somebody else. Remember that, that’s all I want.”

Speaking to a crowd of more than 100 people inside a warehouse turned-arts space on Chicago’s South Side on Sunday, Mr. Geiter announced a new education initiative he has named after Sister Sanders, and explained how their relationship inspired it.

“She saved my life, she really did,” Mr. Geiter told America.

In Sister Sanders Mr. Geiter found more than financial assistance. The mentorship Sister Sanders provided started the day the pair met at St. Xavier and it continued through his master’s program at the University of Chicago and eventually his doctorate at Benedictine University.

The Sister Susan M. Sanders, R.S.M. Teaching and Learning Center will provide career and life training to 30 students, all former criminal offenders. Five come from the state prison system, five from the county jail and the remainder are individuals who were released within the last six months.

“They’ll learn about their rights and some of their limitations as convicted felons, how to navigate that system, especially when it comes to housing, jobs, background checks and everyday issues,” Mr. Geiter said.

All the instructors, including Mr. Geiter, are former criminal offenders, which he believes will help him show students that they can have brighter futures.

“If we know that the vast majority of African American men are offending between the ages of 18 and 35, what can we do while they’re in their highest offending years to cut that recidivism off? To me, it’s education,” he said.

Individuals who do time in jail in Illinois are more likely than not to end up back in jail within three years,according to a 2011 study. Even if they stay out of trouble, they willface obstacles when it comes to finding a job or a place to live.

Mercy is a noun, but mercying is a gerund. It implies action..Mercying is an ongoing thing.

Those are the kinds of challenges Sister Sanders helped Mr. Geiter overcome when he was a student and they are what he wants to help his students understand today.

The 30 students in the program will be required to work 15 hours per week at a local part-time job and another 15 hours taking classes on their rights as former offenders.

“We’ll go out and fill out an application at a place we know is not going to hire us if we’re convicted felons, but we want them to go through the process,” he said. “We want them to understand how to overcome that, just like I did myself.”

The program is the first in what Mr. Geiter hopes will eventually become Ward College, a community college whose student body will be comprised of former criminal offenders.

Organizers are waiting for approval from state education regulators before they can officially open as a college.

Sister Sanders told America that what’s unique about the program is that it takes a holistic view of the challenges some communities face in attaining education and job training.

“It could just be another educational thing to help people who need help,” she said. “But what’s going to go on here is significant attention, accompaniment, to stay with them. It’s never enough just to pay people’s bills.”

Though Sister Sanders and Mr. Geiter don’t see each other in person as often as they once did—she has moved to Omaha to serve her religious order’s leadership team—they remain in regular contact. She has helped him meet power brokers in Chicago in order to raise money.

It’s that sustained relationship that Mr. Geiter said is essential to student success.

“What Sister Sue did for me should be part of student services. Most students, academically, can do the work,” he said. “But when you go home to eviction, and power being off, and children being in trouble, and a lack of daycare, and only making an $8 an hour and still having to pay $800 a month in rent, the life problems seem to always overcome the academic [problems].”

For her part, Sister Sanders pointed to Pope Francis and his emphasis on mercy when she spoke about her vision for the center.

“Mercy is a noun, but mercying is a gerund. It implies action,” she continued. “Mercying is an ongoing thing.”

During the naming ceremony on Sunday, Sister Sanders and other members of her community blessed a candle and a Mercy cross, which will remain at the center. And though the center does not have an explicit faith component, Mr. Geiter said it is impossible to understand the mission without the Mercy Sisters.

“I really believe in the Sisters of Mercy mission,” he said. “For me, I’ll always be a Sister of Mercy. Always.”