Lakota teens say DAPL victory is ‘history in the making’ 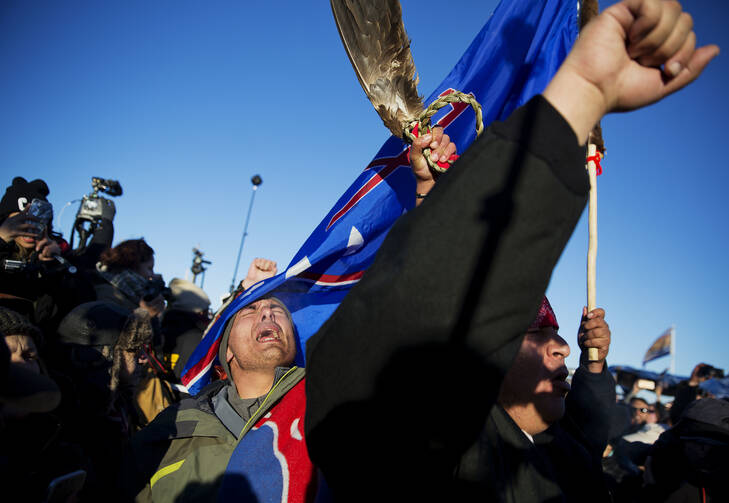 Members of a Native American drum procession celebrate at the Oceti Sakowin camp after it was announced that the U.S. Army Corps of Engineers won't grant easement for the Dakota Access oil pipeline in Cannon Ball, N.D., Sunday, Dec. 4, 2016. (AP Photo/David Goldman)

Lakota teenagers expressed reluctant enthusiasm at the announcement by U.S. Army Corps of Engineers on Sunday that it will not approve an easement to allow the Dakota Access oil pipeline to be built under Lake Oahe in southern North Dakota.

“This is really history in the making,” said Marcus Ruff, a senior at Red Cloud Indian School. According to Mr. Ruff, the protesters were standing up for basic human rights.

Taylor Charging Crow, a 17-year-old member of the Lakota Sioux tribe, expressed joy upon hearing the news. Livelihoods depend on the success of the protest movement, she said.

The protest movement, which began in early 2016, attracted thousands of people to North Dakota. Protesters made up of several tribes from the Dakota region and people from across the country contend the land proposed for the pipeline belongs to Native Americans from a treaty signed 150 years ago. The Standing Rock Sioux filed a lawsuit in July, stating the proposed project would also run through tribal sacred sites and threaten drinking water for millions of people.

Jo-Ellen Darcy, U.S. Army assistant secretary for civil works, said in a statement the developers must “explore alternate routes” for the pipeline, which would have run underneath Lake Oahe on the Missouri River, a half-mile away from a Native American reservation. The $3.7 billion Dakota Access pipeline was almost complete and would span 1,172 miles across four states.

The months of tension related to the protests have been particularly stressful for Mr. Ruff and other students of Red Cloud, a Catholic school run by Jesuits and the Lakota people in Pine Ridge, S.D. The coverage of the events has been “surreal,” he said.

“One side of me is very proud of just the stand my tribe has been taking and other indigenous tribes have been taking,” he said. “But the other side of me is sad that [this] has to happen.”

The 18-year-old Mr. Ruff was part of a group of students who visited the protests in the fall to deliver warm items for the coming winter. The pipeline proposal showed a dehumanization of native peoples, which he said troubled him and his friends.

“A lot of students at Red Cloud, they were really depressed,” he said. “A lot of my fellow classmates got really down because of the violence that’s gone on [toward the protesters].”

In "Dakota Re-Route Opportunity" (11/21), the editors of America described the startling image of officers in riot gear facing indigenous people:

The sight invokes the most gruesome and unjust incidents from the past and suggests that Native American communities continue to be ignored and devalued in the present. It is hard to imagine the concerns of another sovereign state being similarly dismissed by U.S. government officials and energy producers.

The failure by developers to recognize the human rights of land and water for native people is “ridiculous,” said Almadon Swalley, a 17-year-old senior.

“It’s getting to the point where you have to talk about race,” he said. “It’s an ugly thing to talk about, but it’s there.”

Water plays an important role in Sioux religious ceremonies, it being one of the first the elements made by the Creator made. The Lakota prayer, “Mni wiconi,” meaning “water is life,” has become a rallying cry to protect the water reservoirs endangered by the pipeline construction. Ms. Charging Crow said her grandfather prays over a cup of water before drinking it.

Many outsiders do not understand the role of water and land to the Lakota people, Mr. Ruff said.

The announcement was, however, a short-term victory, said Taylahni Jackson. The 16-year-old junior said the news was comforting, but the decision is only temporary. Protesters are unlikely to leave the camp and no one knows what President-elect Donald J. Trump will do when he takes office in January. Mr. Trump supports the building pipeline and is believed to have owned stock in the project. The fight between oil pipeline developers and native people will likely continue with construction of the Keystone XL pipeline, too.

Mr. Swalley said the protests united students at the school to fight for a cause. What happens next could be a tipping point in the history of corporations recognizing the rights of native people, he said.

“As far as I know, a conversation like this has never been had,” he said.