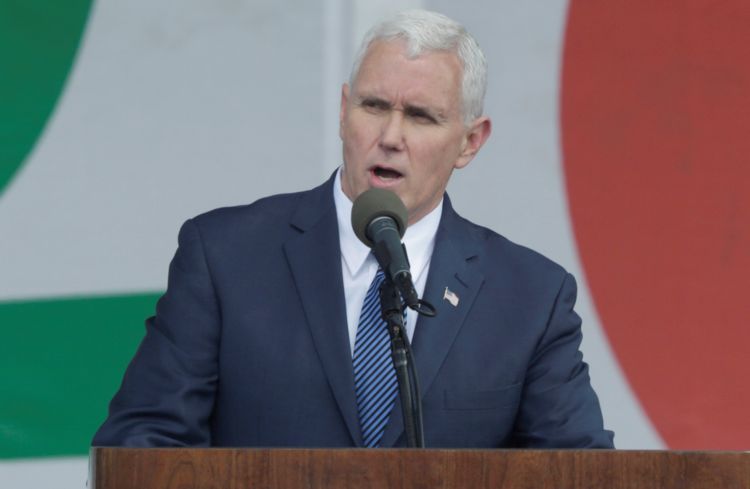 Consider him a compromise candidate.

Vice President Mike Pence will receive an honorary degree from the University of Notre Dame and give a speech at commencement in May, the university announced Thursday.

The selection of Mr. Pence ends months of speculation over whether one of the nation’s most prestigious Catholic universities would honor President Donald J. Trump, whose policies have been condemned by a number of Catholic leaders.

In the announcement, the school’s president, John I. Jenkins, C.S.C., said the school chose Mr. Pence, in part, because of his connections to Indiana, where Notre Dame is located.

.@VP Mike Pence will receive an honorary degree and serve as principal speaker at our May 21st Commencement ceremony https://t.co/gyk1a1cWWHpic.twitter.com/8kZ4nFwZ7z

“It is fitting that in the 175th year of our founding on Indiana soil that Notre Dame recognize a native son who served our state and now the nation with quiet earnestness, moral conviction and a dedication to the common good characteristic of true statesmen,” Father Jenkins said in a statement.

“With his own brand of reserved dignity, Mike Pence instilled confidence on the state level then, and on the world stage now,” he continued. “We are proud to welcome him to represent the new administration.”

In December, Father Jenkins said he was unsure if Mr. Trump would receive an invitation, pointing to the political maelstrom that followed an invitation to then-President Barack Obama to speak in 2009. Other presidents who spoke at Notre Dame commencements include Dwight Eisenhower, Jimmy Carter, Ronald Reagan, George H. W. Bush and George W. Bush. President Bill Clinton was not invited.

The decision to honor Mr. Obama caused some church leaders to protest the commencement, citing his support for abortion rights, with the local bishop even deciding to skip the ceremony.

In an interview last year, Father Jenkins pointed to that controversy as a reason why he may not invite Mr. Trump.

“I do think the elected leader of the nation should be listened to. And it would be good to have that person on the campus—whoever they are, whatever their views,” Father Jenkins told Notre Dame’s student newspaper last year. “At the same time, the 2009 Commencement was a bit of a political circus, and I think I’m conscious that that day is for graduates and their parents—and I don’t want to make the focus something else.”

Earlier this year, Philadelphia’s Archbishop Charles Chaput said that Mr. Trump should be invited to speak at the university during commencement, though he stopped short of saying the president should be given an honorary degree.

Praising what he saw as openings in the Trump administration for pro-life initiatives, Archbishop Chaput wrote in a column, “Notre Dame takes pride in its tradition of welcoming to campus U.S. presidents from both parties and with very different views. In that light, the invitation would certainly make sense and might be fruitful in unforeseen ways.”

Mr. Pence, a one-time Catholic who began attending a nondenominational church in college and has since described himself as “a born-again, evangelical Catholic,” was elected governor of Indiana in 2013, a post he held until he was elected vice president in November.

His views on abortion fall in line with those of the Catholic Church, but he could face protests over his hardline stances on immigration and refugee resettlement.

In 2015, he clashed on the issue with Cardinal Joseph Tobin, who was then the archbishop of Indianapolis. Mr. Pence asked Archbishop Tobin to order a local Catholic Charities office not to move forward with the resettlement of a family of Syrian refugees in the state. The archbishop refused, noting that the family had been vetted by federal authorities for two years and that they were given the green light.

Now the archbishop of Newark, Cardinal Tobin has been one of the strongest critics of the Trump administration’s refugee ban among U.S. bishops.

Notre Dame’s commencement will take place May 21. Mr. Pence will become the first sitting vice president to speak at the ceremony.

Seems petty. Pence's position on so many things is abhorrent, so the fact that he has more decorum than Trump is irrelevant.