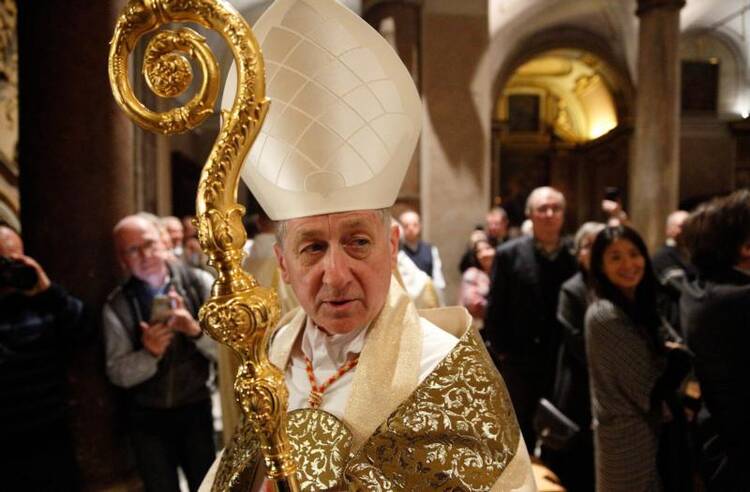 New Cardinal Blase J. Cupich of Chicago leaves a prayer service at which he took possession of his titular church of St. Bartholomew on Tiber Island in Rome on Nov. 20. (CNS photo/Paul Haring)

The Roman Catholic archdiocese in Chicago told its schools this week not to let federal immigration agents into their buildings without a warrant, in step with guidance given to hundreds of Chicago public schools last week in response to President Donald Trump's efforts to crack down on illegal immigration.

Marking what may be the first such guidance issued by a Roman Catholic church leader, Cardinal Blase Cupich sent the directive in a letter on Monday to principals of more than 200 schools and other officials in the nation's third largest archdiocese. He said that if immigration agents show up without a warrant, to "tell them politely they cannot come on the premises, ask them for their contact information and tell them to contact the (archdiocese) Office of Legal Services."

Kevin Appleby of the Center for Migration Studies, a Catholic policy institute that advocates for immigrants and refugees, said he was unaware of any other U.S. bishop sending such guidance in response to Trump's sweeping rewrite of immigration enforcement policies.

"Cardinal Cupich is adhering to the civil law but also sending a message to the Trump administration that his priests and archdiocese will not be assisting (the Department of Homeland Security) with their mass deportation program," said Appleby, who for years led the immigration office of the U.S. Conference of Catholic Bishops. "While President Trump is using all legal means possible to deport immigrants, the church will use every legal means possible to protect them."

A spokesman for Homeland Security declined to comment but pointed to the department's website, which says enforcement action at "sensitive locations," such as schools and churches, "should generally be avoided."

For weeks, parents and school officials have reported that children have expressed fears that they or their friends will be grabbed by immigration agents or they will come home to find their parents have been taken. Chicago Public Schools issued similar guidance to its roughly 650 schools last week.

Agents with the U.S. Immigration and Customs Enforcement have rarely entered places like churches to take custody of people living in the U.S. illegally. Still, Cupich's letter won praise by people and groups worried that agents may not show such restraint given Trump's aggressive new enforcement plan.

"I think it's good that he is giving his priests some instructions on how to deal with ICE, because we shouldn't allow them to just come into our property and round up immigrants who have come there to pray or participate in parish activities," said the Rev. Thomas Reese, senior analyst for the National Catholic Reporter newspaper.

Cupich, who was appointed in 2014 to oversee the archdiocese's 2.2 million Catholics, did not say what principals should do if agents insist on being allowed in schools. In the letter, he makes clear that the archdiocese has limited power.

"We have not named our churches as 'sanctuaries,' solely because it would be irresponsible to create false hope that we can protect people from law-enforcement actions, however unjust or inhumane we may view them to be," he wrote, noting that there are "criminal penalties and fines for anyone who conceals, harbors or shields from detection" anyone who has entered the U.S. illegally.