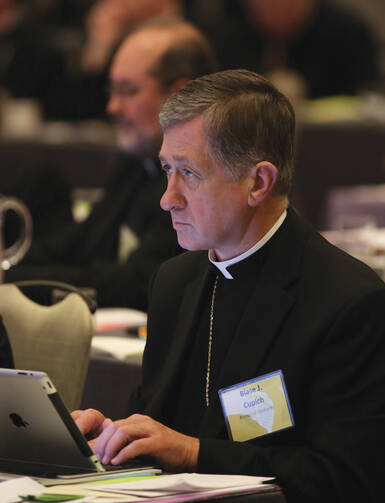 Describing himself as “beyond surprised” by his appointment to the Archdiocese of Chicago, Spokane Bishop Blase Cupich pledged to work with people of faith to “serve the common good” and continue efforts to promote healing in a church community wounded by the sex abuse crisis. During his first meeting with Chicago’s press on Sept. 20, Bishop Cupich said he would “keep the focus on protecting children and healing people who have been abused by Catholic clergy.

“It’s always going to be imperfect, it’s never going to be enough, but we can try to do as best we can with our limited resources but also with the great grace of God to bring about healing on many deep levels. I’m committed to doing that,” said Bishop Cupich. “I will work hard at this and make it an important part of my ministry.”

Local and national media have depicted the ascension of Bishop Cupich as an indication that Pope Francis would no longer be appointing “cultural warriors,” as his predecessor Cardinal Francis George had frequently been portrayed. Bishop Cupich, however, took pains to deflate that analysis. “I don’t come with any intentionality,” he told the press assembled at the archdiocesan chancery. “I think the Holy Father is a pastoral man; I think that his priority is not to send a message, but a bishop and that’s what he’s sending here—someone to serve the needs of people.... I think he cares a lot about people and he took his time and he wanted to provide a pastor, so I think he sent a pastor, not a message.”

Commenting on his reputation as a “church moderate,” Bishop Cupich said, “Labels are hard for anybody to live up to one way or another. I just try to be myself and I try to learn from great people. You have had great people here in this archdiocese pastor you, and I am following a great man. I am going to try to learn from you.

“It’s not my agenda, it’s not what I feel. I am going to try to be attentive to what the Lord wants. Maybe if there’s moderation in that, then I am a moderate.”

He did agree that his personal style was likely going to offer a change in pastoral “tone” in Chicago. “Everybody brings their own gifts and talents and experiences. If you look at the history of the various eight predecessors, archbishops here, they have all brought something different, so yes I think that it is reasonable to expect that there will be different emphases and different approaches; that’s normal.”

Asked how he would prioritize his efforts on behalf of Chicago’s large Hispanic community, Bishop Cupich took the opportunity to scold the Obama administration and Congress for inaction on comprehensive immigration reform. “It’s time for political leaders to put aside their own agendas and to take up this issue,” he said, “so I want to take this opportunity to urge that again. Everyday we delay it is a day too long and we should move on it today.”

Cardinal George will become the first leader of the Chicago archdiocese to retire from that role, and he thanked Pope Francis for acceding to his request to do so. He told reporters that retirement will allow him not only to assist Bishop Cupich in the transition to the leadership of 2.2 million Catholics in the nation’s third largest archdiocese, but to focus on his health. The cardinal’s battle with cancer has clearly taken a toll. He said the archdiocese needed a full-time leader, something his health challenges no longer allowed him to be.

He thanked Pope Francis for sending “an able man who will serve well,” adding, “I leave this church in better hands than mine.”

Bishop Cupich praised Cardinal George for his steadfastness during discussions related the the church’s development of the Dallas “Charter for the Protection of Children.” “We would not have zero tolerance with regard to the issue of child protection if it were not for this man here,” Bishop Cupich said, referring to the cardinal. “He was the one who pressed for it more than anybody against some formidable opposition, so not only do we have that in the church in the United States, we have that universally now.”

Both men will return to their current episcopal roles for the next few months. Bishop Cupich is finishing up a pastoral plan in Spokane, a diocese which faces significant financial challenges because of court settlements related to the sex abuse crisis and a messy bankruptcy. He will be installed as Chicago’s new archbishop on Nov. 18.

Bishop Cupich was born in Omaha, Neb., in 1949. He studied theology at the Pontifical Gregorian University and was ordained a priest for the Archdiocese of Omaha in 1975. In 1998, he was named bishop of Rapid City, S.D., and in 2010 he became bishop of Spokane.

Kevin Clarke
@clarkeatamericaclarke@americamagazine.org
Show Comments (
1
)
Comments are automatically closed two weeks after an article's initial publication. See our comments policy for more.
William Atkinson
7 years 7 months ago
Interesting! Last two Archbishops to Chicago came from Eastern Washington State. Bishop George from Yakima, Washington; and now Bishop Cupich from Spokane. Wonder what Eastern Washington has that the rest of the country could benefit from. Might it be that both places have a large Jesuit university, or that both places, in contrast to Chicago have very small minority population. Both bishops were known for intense deep spiritual life, and a management ability that was solidly that of a strong shepherd, that was badly needed to repair previously greatly damaged diocesan churches. Both diocese were strong ranch and farming, also with large native, communities and previous bishops were more into church's pastored by less cowboy and more effeminate minded persons. Both bishops, came to Chicago, an extremely diverse archdiocese, after major turnaround in building a much stronger and faithful communities in Eastern Washington.