How can priests preach in the age of Trump—without mentioning Trump?

How can priests preach in the age of Trump—without mentioning Trump? 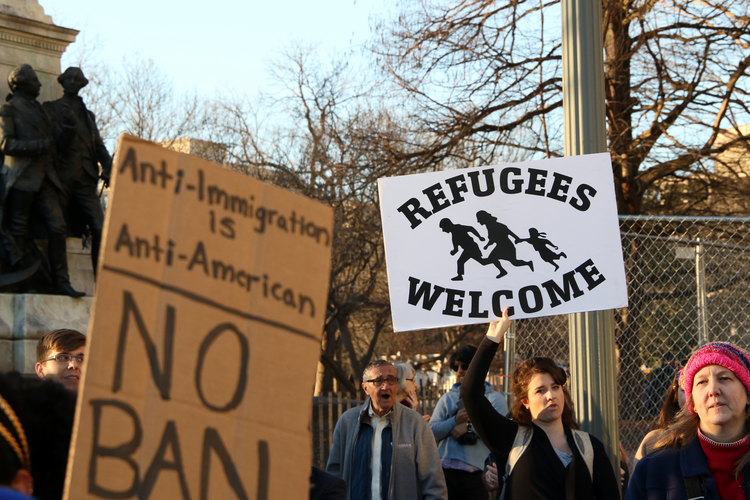 People protest against President Donald Trump's immigration policies during a demonstration near the White House in Washington Jan. 25. (CNS photo/Gregory A. Shemitz)

A priest friend who works at a parish in the Midwest confided recently that he was finding it hard to preach these last two weeks. “It’s a high-wire act,” he said.

On one level, his comments disturbed me. I get it, some parishioners at our parishes might be happy with the way things are going in this country, might have hoped for this in the first place. And maybe some of those parishioners are among the most generous, too. Money: It talks, and it also muzzles.

But if parish priests and other Catholics in the United States cannot stand up in this important moment for the very people Jesus stood with—the marginalized and needy that Pope Francis keeps calling our attention to; the meek, the mourning, the poor in spirit and the hungry for righteousness described as “blessed” by Jesus in the Gospel reading the Sunday after the Trump administration’s travel ban was announced (ain’t no karma like Jesus Christ-karma)—we might as well pack up our Mass kits, turn out the church lights and permanently relocate to the beach. I am sure the UV rays and the rising waters won’t get too bad for at least the next couple years.

Yet it is also true that our politics right now so corrode our capacity for prayer and poetry that even just a hint of something slightly adjacent to a topic that might be able to be partially interpreted by some as perhaps related to a policy of the current president is transmogrified instantaneously into a furious Frankenstein’s monster of pro- or anti-Trump rhetoric. A homily should offer a word of welcome and invitation, an opportunity for a greater relationship with our Lord. But everything has become so heightened, it is hard to recognize such an invitation, let alone accept it. At every word we anticipate controversy. “Can you believe that guy, making us say that prayer together?!” “Um, Mom, that was the Our Father.”

Some might say, leave your politics at the door. Church is our blessed escape. And, personally, most of the time at Mass I just want to be in the quiet, nourishing, presence of our Lord. Spare me the 20-minute homilies. Nobody came here for that.

But no religion whose central symbol is a man nailed to a cross gets the luxury of claiming it is an oasis. The history of our salvation is equal parts divine love and social sin, scapegoating and forgiveness. And rather than assuring us that we will not have to take the road to Jerusalem ourselves, the life of Christ promises that if we are faithful, we are almost definitely going to end up walking it with him.

Finding the peace, the grace, the presence of God in that conflict—that is the challenge before us as homilists always, but maybe more evidently now. Not to run from the presentnor rally to a side but to wade into our shared discomfort and darkness with the Lord and to ask him to lead us to some light.

It is never going to be the right choice to mention President Donald J. Trump in a homily.

Maybe it is not even necessary for homilists to talk explicitly about the poor in our world right now (although I think Pope Francis might have some fun responses on a future airplane ride to that). So often it is not our words, our turns of phrase that we are there for, as much as offering some sense of God’s welcome, his invitation and call to loving mercy.

Avoidance of the issues the poor and suffering face every day is a non-starter and not a worthy way to advocate for their needs. Our cities and now our local rural areas have hordes of homeless, hungry, poverty-stricken people for whom a national mindset seems to say, "tough luck." Who are the authors of this diatribe against the neediest? Who can say our meager efforts are already too much? Who can claim that our own poor should consider themselves rich in comparison to starving Africans and refugee Syrians? For too long these folk have been waiting for that good Samaritan to notice our pain and stop to offer us aid. Too long have we blamed the poor, their children, and their heritage for so-called self-inflicted injuries and simple lack of ambition and fortitude. Bootstrapping oneself is very difficult when bare feet are broken and bloody.

The poor and working class in America for decades have been blamed, ridiculed and sneered at by the elites and righteous religious and clergy.Donald Trump looked at them and saw the suffering the elites ignored. He heard their cries while the elites ignored them in favor of those they could really lord it over.Wake up.

Helen, could you please provide some specific examples of what you are referring to? The religious and clergy blaming, ridiculing and sneering at the poor?? Seriously? I would like to know of what denomination, at what time and in what instance. As for the elites you also include, are these equally of right and left, republican and democrat? Again, I would appreciate specific examples here. Thank you.

Preach the Gospel. Let both sides feel uncomfortable. Nobody has the corner on Christ. Both sides are highly deficient. I wouldn't worry about being pleasing to either side.

I have kept this article since I first received it in 1987. It has been my best guide - and from someone who has walked the walk. Albert Nolan was elected to be the Congregational Leader but he declined the position because he felt he was needed in South Africa.
https://www.scarboromissions.ca/Scarboro_missions_magazine/Issues/1990/February/taking_sides.php

I thought I wouldn’t and maybe I shouldn’t, but when the Little Imps of the Internet steal a post enroute, it makes me “itchy” to let them win. This not because my contribution is so important, but because it deprives me of an opportunity to “get involved” to express an opinion that just might be a bit helpful, certainly helpful to me for having said it.

So, I’m reposting a much abridged version of what I originally said, probably a good decision sparing as it does the burden of longwinded redundancy on any who may read what I say on the question, “How can Priests preach in the Age of Trump, without mentioning Trump?

In a word, they can’t and why should they? Let them ask the simple question, WWJD? And act accordingly. One of the overlooked sins that in younger years I tended to commit often, was the sin of Human Respect. That sin happens when in willful commission one decides not to do the right thing because of what people might say. Avoid doing that!

The right thing is to speak up clearly and fearlessly when anyone even a President acts wrongly in light of Gospel teaching. But it must be done gently, respectfully, seeking a change of heart, a change of heart too for congregants if necessary, leading to what the Gospel calls “conversion” meaning in Gospel-talk, the total turning of oneself inside out in pursuit of righteousness. That’s all I have to say

Liberal democrats who profess to be Catholic always complained whenever the bishops spoke out against abortion. This partisanship in general and the détente with abortion completely undermines the argument that priests should be mentioning Trump. What if they said some good things about him? Would that count?

As someone who works daily with the outcast and the marginalized, poor black and white folks, I can tell you that the elites including the religious clergy,ignored them and worse - mocked them, labeled them and put them down. President Trump saw them and LISTENED to them.A first time experience for most of them. Get a clue and start listening.

Helen, could you please provide a clue of some sort -- some specific examples of what you are referring to? The religious and clergy blaming, ridiculing and sneering at the poor?? Seriously? I would like to know of what denomination, at what time and in what instance. As for the elites you also include, are these equally of right and left, republican and democrat? Again, I would appreciate specific examples here. Thank you.

A couple of comments on Mr. McDermott’s piece:

While a student at the University of Wisconsin, Madison, I recall a homily while attending Mass at the Catholic student center recommending the withholding of financial support where Catholics might disagree with the preaching. In retrospect, more people did it than I ever expected, including as well just walking away from churches. The homilist was actually very prescient.

A homilist can talk all he wants about Gospel values and virtues but they will always now be perceived as criticisms of Trump. That’s because it’s a rhetoric never previously specifically spoken in homilies in the churches, at least the ones that I’ve attended. So it’s a rhetoric whose target congregants will see as Trump, not as a personal moral issue. For years and years, the hierarchy of the country posed certain moral issues of the day. Abortion, religious freedom, religious conscience, these are issues about which I have heard homilists preach. But “welcoming strangers,” for example? Any homilist worth his salt who does so preach will be seen as injecting politics into church!

In the most recent edition of my archdiocesan newspaper, there were two letters to the editor, one decrying the Bishop’s failure to be outspoken against the Trump actions on immigrants, the other defending Trump’s actions as a means to national security. The former hit the nail on the head. The latter reflects what a goodly portion of the paying congregants think. So the Bishop, faced as he is with major economic concerns, remains “neither hot nor cold”.

Did you see the picture of Trump discretely tipping a busboy $100? Have you spoken with the gal he put in charge of his real estate projects in NYC. Do you ever wonder why, once folks are employed by the Trump Organization, they rarely leave?

Trump doesn't comport with the tenure-oriented modality and naif two-dimensional analysis which libs posit. He's a guy who always presses on the golf course. While Hillary was selecting swatches of wallpaper and paint samples for the White House he was furiously campaigning in Pennsylvania, Michigan and Ohio. Who do you want in your corner.

All the clerics and equerry of the institutional US Catholic Church are required to wear an anti-Trump label on their tunics. I posit that the Donald, in his quiet and long established personal praxis, might just be more Christian in spirit and action than the entire lot.