Neil Gorsuch is a strong critic of assisted suicide, but that may not matter on the high court 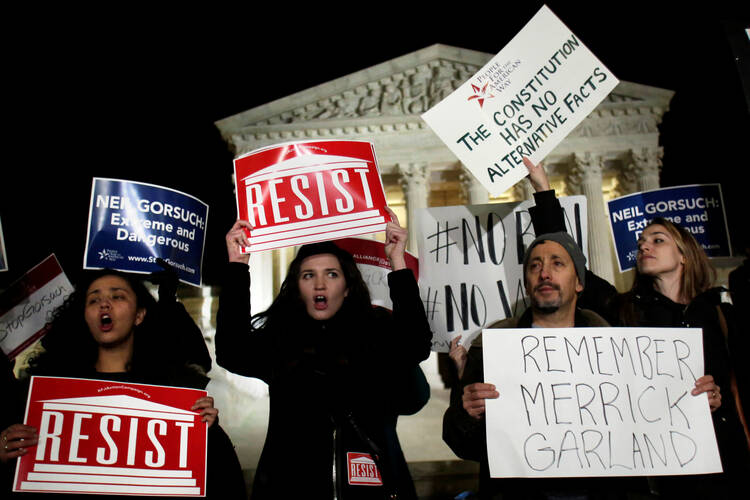 Protesters rally outside the Supreme Court in Washington on Jan. 31 against President Donald Trump's Supreme Court nominee Judge Neil Gorsuch. If confirmed, Gorsuch will fill the seat that has been empty since the death of Justice Antonin Scalia last February. (CNS photo/Yuri Gripas, Reuters)

When it comes to questions of life, Supreme Court nominee Neil Gorsuch laid out his views rather succinctly in his 2006 book, The Future of Assisted Suicide and Euthanasia.

“All human beings are intrinsically valuable,” he wrote, “and the intentional taking of human life by private persons is always wrong.”

In November, Colorado—where Mr. Gorsuch lives—became the sixth in the nation to make it legal for doctors to prescribe lethal doses of medication to terminally ill patients. Oregon became the first in 1994, and proponents of such measures, dubbed “aid in dying” or “death with dignity,” already have campaigns underway in several other states, ensuring the debate will continue for years to come.

Supporters and opponents both agree that courts will likely weigh in at some point. The last case to make it to the Supreme Court was in 2006, when justices ruled that doctors in Oregon could not be barred from carrying out the practice. But even if Mr. Gorsuch is confirmed, they are not sure the court will be taking up similar cases anytime soon.

“In all honesty, [Mr. Gorsuch] hasn’t played much of a role in the assisted suicide debate,” Arthur Caplan, the director of the Division of Bioethics at New York University Langone Medical Center, told America.

“There’s always academic discussion and there has been for some time,” he continued, “but the assisted suicide issue in the United States is being resolved at the state level. It’s a state’s right’s question.”

Dr. Caplan, who believes terminally ill patients should be allowed “to die in the way that they want,” called Mr. Gorsuch “a thoughtful, principled judge.” But he believes laws will continue to be implemented at the state level.

“Gorsuch may be a strong opponent of assisted dying, but I don’t think that’s really going to turn into a federal issue,” he said. “And I don’t know what the other Supreme Court justices are going to think” about the issue, he said, noting that it does not fit neatly into the liberal-conservative divide.

An opponent of physician assisted suicide said he is “edified” by Mr. Gorsuch’s nomination, but he agreed that it’s unlikely that the Supreme Court will weigh in anytime soon.

“For the foreseeable future the battle and the fight will continue to go state by state. There’s a strategy by proponents to get more states on board before they bring a case to the court,” Dr. Aaron Kheriaty, a psychiatrist at the University of California at Irvine who testified against the California bill before it became law, told America.

Still, he said Mr. Gorsuch’s confirmation could give pause to proponents who hope to use the courts to legalize the practice nationally.

“If he is approved and ends up on the court, I think the possibility in the short term that someone will make that case is probably less than it would have been with a different appointee because he makes pretty clear in the book how he would rule in a case like that,” Dr. Kheriaty said.

Public support for physician assisted suicide has skyrocketed in recent years. According to a 2015 Gallup poll, about seven in 10 Americans think the practice should be legal, up more than 15 points from 1997.

The Catholic Church teaches that all life is sacred, from conception to natural end, and is thus against laws legalizing physician assisted suicide.

Assisted Suicide has already been firmly and formally established

My mother was in a nursing home for over 10 years. Not being able to be home with Dad, it was not too long that he became challenged living alone. Then, my younger brother got cancer and later on Parkinson's Disease. We got all three of them consolidated and centralized into one facility referred to as "transitional care" or "rehabilitation". We knew Mom would never come back home, and quite soon we learned that bro and Dad would not come back home either. So, on every visit, we could only watch them suffer and try to advocate for them in a multitude of ways. I often wondered what "transitional care" meant for them because it was clear they would never live independently again. Transitional care soon became hospice care. To me, when my younger brother lost his will to live, basically, his transitional care was to allow him to deteriorate, try to make him somewhat comfortable, and assist him in dying. It was the same for Mom. Both of them died within five weeks of each other this past summer. Assisted suicide has already been firmly rooted in our healthcare non-system as have the dreaded death panels of Obamacare as has rationed medical care which is the fear phrase used against universal health care.

Thank you, Andrew,
for your poignant testament.
.