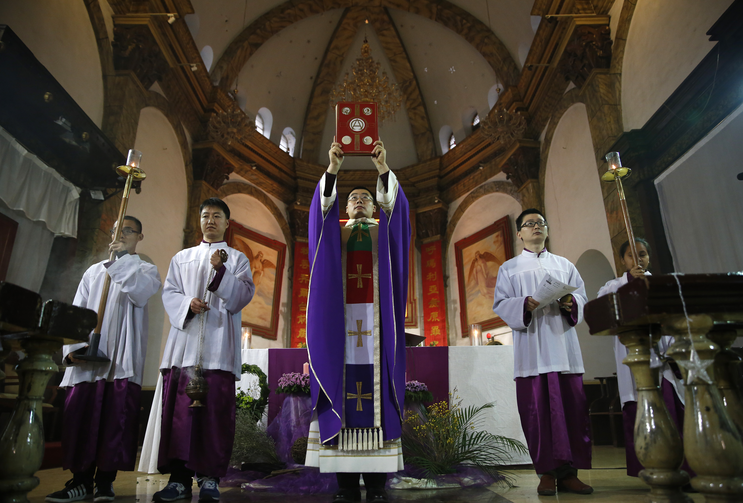 In a statement on China released by the Vatican on Dec. 20, the Holy See sought to reassure Chinese Catholics that it understands their concerns because of recent events in the church’s life there. The Holy See declared that it is closely monitoring what is happening to the church in China and asked for “positive signals” from Beijing that would help China’s Catholics “have trust” in the Sino-Vatican dialogue.

In recent weeks, Catholics in China have been perplexed by the silence of the Holy See after an illegitimate (that is, ordained without papal approval) and excommunicated bishop, Paul Lei Shiyin, attended and concelebrated Mass at two of the three recent episcopal ordinations in China: he was present at Chengdu on Nov. 30 and Xichang on Dec. 2 in defiance of church law. They know that Beijing wants the Holy See to recognize him and seven other illicitly ordained bishops as part of a landmark accord between the two sides, but such actions throw up obstacles to that possibility.

Sources in China allege that the Bishop Shiyin acted under instructions from Beijing. Some Catholics in China had grown concerned that the church was opting for silence before such provocations in the interests of reaching an accord with Beijing. Whatever the reason for his participation, the Vatican declaration makes it clear that Rome has not yet decided on legitimizing his situation as the Chinese authorities want; it said this is still “under study.”

The Holy See sought to address these growing concerns and answered queries from the international media with the declaration from the Holy See press office, issued at the instruction of the Secretariat of State. The declaration states that “the presence...of a bishop whose canonical position is still under study by the Apostolic See following his illegitimate ordination, has created unease among those involved and perturbation to Chinese Catholics.” The declaration added significantly, “the Holy See understands and shares their pain.”

Chinese Catholics are also concerned by the decision of authorities in Beijing to convene the Ninth Assembly of Representatives of Chinese Catholics, which is the overall body that controls church life in China. The last such assembly took place in December 2010 after what looked like a promising thaw in Sino-Vatican relations, an improvement which had included the ordination of bishops agreed to by both sides.

The ninth assembly is expected to take place Dec. 26-29, even as the dialogue between both sides is at an advanced stage. Some interpret the announcement of the assembly, along with the actions of Bishop Shiyin, as a sign that the Chinese authorities wish to demonstrate unequivocally that they control the church’s life, not Rome.

The assembly’s declared purpose is to implement the autonomy, self-management and democratic administration of the church. After the 2010 assembly, the Vatican issued a statement asserting that this way of operating “is incompatible with Catholic doctrine.” In 2010 officials from the state and the Communist Party controlled the entire proceeding. Bishops were forced to participate in the eighth assembly in ways that went against freedom of religion and conscience. There is great concern among Chinese Catholics that the upcoming assembly will follow suit.

In 2010, the Holy See asked bishops not to participate in the assembly, which appoints the leadership of the Chinese Catholic Patriotic Association and the equivalent of a bishops conference. This time, the Holy See did not make any such public request, but that does not mean it is happy that the ninth assembly is to be held. Indeed, if it were to follow on the same track as the last assembly, it would constitute a serious obstacle to the ongoing dialogue.

The Vatican declaration’s reference to the gathering took a low-key, diplomatic tone. It suspends judgment for the moment, but the underlying message is that the Holy See too has a bottom line. “The Holy See waits to judge on the base of proven facts,” it said.

The Holy See said it is keen to reach an accord with China on all that concerns the nomination and recognition of bishops, but this requires that Beijing, too, engages in a sincere and honest dialogue that makes such an agreement possible.

With this in mind, the declaration concludes by telling the authorities in Beijing that the Holy See “is certain that all the Catholics in China wait with trepidation for positive signals that [can] help them to have trust in the dialog between the civil Authorities and the Holy See, and to have hope in a future of unity and harmony.”

Editor's Note: This article was updated on Dec. 21 at 10: 59 a.m. to correct an error introduced during editing: Bishops were not ordained during the 2010 Assembly of Representatives of Chinese Catholics.