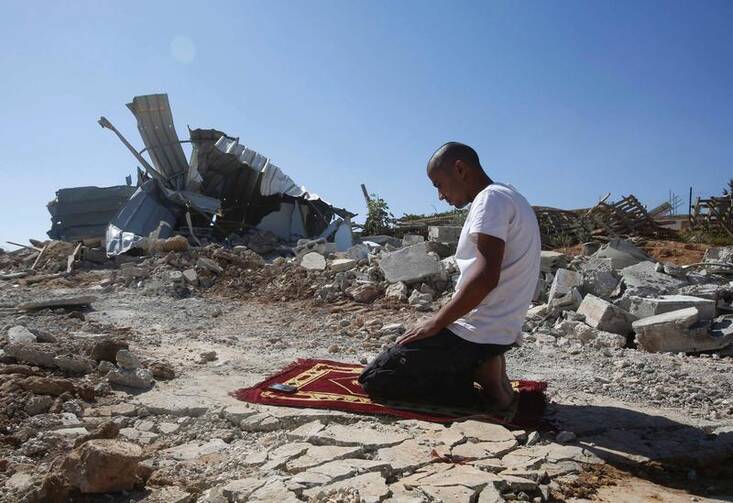 A Palestinian Bedouin man prays near his dwelling that was demolished by Israeli bulldozers near the Jewish settlement of Karmel, near the West Bank city of Hebron on Oct. 27. (CNS photo/Mussa Qawasma, Reuters)

The municipality of Jerusalem granted final approval Sunday for the construction of hundreds of new homes in east Jerusalem, while a hard-line Cabinet minister pushed the government to annex a major West Bank settlement as emboldened Israeli nationalists welcomed the presidency of Donald Trump.

After eight years of testy ties with President Barack Obama, Prime Minister Benjamin Netanyahu has said he is looking forward to a new era of close relations with the U.S. under Trump. The two were scheduled to talk on the phone later Sunday.

At his weekly Cabinet meeting, Netanyahu thanked Trump for his friendship and his inauguration speech pledge to battle radical Islamic militants. He said they would discuss the Israeli-Palestinian conflict, the situation in Syria and the Iranian threat, among other issues.

More hawkish elements in his coalition, however, are already calling for concrete action given Trump's perceived acquiescence to Israeli settlement building.

Education Minister Naftali Bennett, leader of the pro-settler Jewish Home Party, was pressing the government to back legislation that would annex Maaleh Adumim, a sprawling West Bank settlement just east of Jerusalem. He also urged Netanyahu to abandon his stated position in favor of a Palestinian state alongside Israel.

Netanyahu, a longtime supporter of the settlements, has nonetheless been cautious about expanding them in the face of strong opposition from the U.S. and other Western allies. With Trump signaling a much softer line toward the settlements, Israeli hard-liners say there is no longer any reason to show restraint.

"For the first time in 50 years, the prime minister can decide: either sovereignty or Palestine," Bennett wrote on Twitter.

An official in the Jewish Home Party said Netanyahu was urging Bennett to put his proposal on hold. Netanyahu said that he had been asked by Trump administration officials not to take any major action without proper coordination, the official said, speaking on condition of anonymity because he was not authorized to discuss internal coalition negotiations.

The official said Jewish Home officials were skeptical of Netanyahu's claims and would continue to push the government to approve the annexation measure. Netanyahu's office declined to comment.

Such a move would cause a major clash with the Palestinians and the rest of the international community, which consider settlements to be illegal. The Palestinians seek all of the West Bank and east Jerusalem—areas captured by Israel in the 1967 Mideast war—for a future independent state.

Annexing Maaleh Adumim would be seen as undermining negotiations. It is also in a strategic location in the middle of the West Bank that could impede the establishment of a future Palestinian state.

In the meantime, the Jerusalem municipal housing committee granted building permits for 566 new homes in east Jerusalem. The permits had been put on hold for the final months of the Obama administration.

Building is planned in the neighborhoods of Ramot, Pisgat Zeev and Ramat Shlomo.

"We've been through eight tough years with Obama pressuring to freeze construction," said Jerusalem Mayor Nir Barkat. "I hope that era is over and we now we can build and develop Jerusalem for the welfare of its residents, Jews and Arabs alike."

Deputy Mayor Meir Turjeman, who heads the committee, said an additional 11,000 homes were planned in east Jerusalem. He said he hopes to get the plans approved by the end of the year and begin construction in the next two to three years.

Israel clashed frequently with Obama over construction in areas it conquered in the 1967 Mideast war, and last month, the Obama White House allowed the U.N. Security Council to pass a resolution condemning settlements as illegal.

Trump has signaled he will take a far kinder approach to them.

Trump's appointed ambassador to Israel has close ties to Jewish West Bank settlements as does the foundation run by the family of Trump's son-in-law, Jared Kushner. Tax records show Trump also donated money to a Jewish seminary in a settlement.

In a sign of the changing times, a delegation of West Bank settler leaders said it was invited by Trump administration officials to attend the inauguration.

Unlike other West Bank settlements, Israel annexed east Jerusalem and considers its neighborhoods inseparable parts of its capital. But the annexation is not internationally recognized.

Netanyahu says Jews have been in these areas for centuries and that their presence does not undermine prospects for peace. He blames failed peace efforts on Arab denials of Jews' historical connections to the land.

Nabil Abu Rdeneh, a spokesman for Palestinian President Mahmoud Abbas, condemned the building plans and called on the U.N. to act. "It is time to stop dealing with Israel as a state above the law," he said.

Israel, now unleashed, may soon celebrate victory over "Palestine".
But apartheid gives lie to protests of integrity;
guerrilla warfare can never, finally, be defeated;
and there will be no international support to buttress her defenses.

Israel will have sown the seeds of her thus-inevitable destruction.
She will die a terribly slow, bitter, and lonely dream.