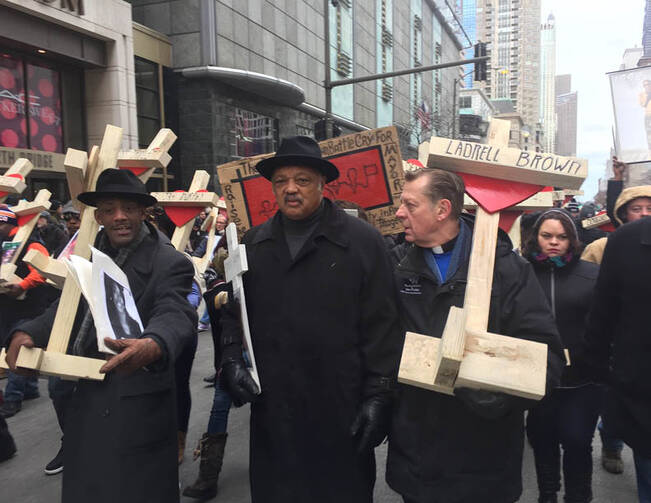 Chicago experienced a level of gun violence unseen in nearly two decades in 2016, enduring 762 homicides—a 57 percent surge over 2015. Several hundred demonstrators, including some of the family members of those killed in the city last year, took to the street on the last day of a dreadful year, demanding justice for their loved ones and calling for an end to the violence. The Rev. Michael Pfleger, pastor of St. Sabina’s Parish on Chicago’s South Side, joined the Rev. Jesse Jackson in leading the march down the Magnificent Mile, the city’s high-end shopping strip on Michigan Avenue. Each of the participants carried wooden crosses bearing the names of victims. Speaking into a bullhorn, Father Pfleger said that while the crosses were heavy, “there is a much heavier weight in the hearts of these family members” mourning the loss of loved ones. Much of the violence is confined to poorer neighborhoods. Holding the march downtown, in the shadows of retailers such as Neiman Marcus and Cartier, was an effort to remind city leaders that violence is not a “South Side problem” but “a Chicago problem,” Father Pfleger said.

Michael O’Loughlin is the national correspondent for America and author of The Tweetable Pope: Spiritual Revolution in 140 Characters.