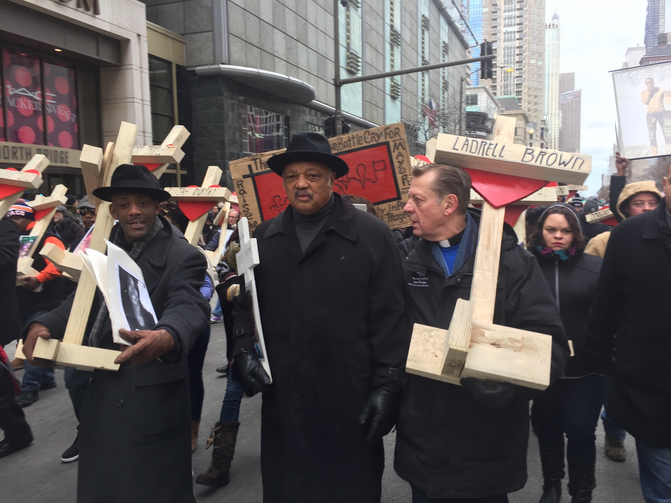 On the final day of one of Chicago’s most violent years in decades, several hundred demonstrators, including some of the family members of the more than 750 people killed in the city in 2016, took to the streets demanding justice for their loved ones and calling for an end to the record-levels of violence affecting the city.

The Rev. Michael Pfleger, a priest and civil rights activist, joined the Rev. Jesse Jackson in leading the march down the Magnificent Mile, the city’s main high-end shopping avenue.

Each of the participants carried wooden crosses bearing the names of victims. Speaking into a bullhorn, Father Pfleger said that while the crosses were heavy, “there is a much heavier weight in the hearts of these family members” mourning the loss of loved ones.

Marchers were silent during the half-mile procession, listening to the names of victims being read aloud. Before turning around, the crowd paused to pray.

The city is experiencing record levels of violence, the worst in nearly two decades. Homicides are up 57 percent and the number of shootings up 46 percent compared to 2015. Over the Christmas weekend alone, more than 60 people were shot and 11 of them died from their injuries.

Much of the violence is confined to poorer neighborhoods, and Father Pfleger said holding the march downtown, in the shadows of businesses such as Nieman Marcus and Cartier, was an effort to remind city leaders that violence is not a “south side problem” but “a Chicago problem.”

Father Pfleger, leading marchers down Michigan Avenue, notes the heavy hearts of those mourning loved ones killed in Chicago in 2016: pic.twitter.com/WWxlPBj1ff

Both Father Pfleger and Rev. Jackson prayed for jobs in poor areas, with the latter calling poverty “a weapon of mass destruction” and calling for a White House summit on revitalizing impoverished areas in America’s cities.

At the conclusion of the march, Father Pfleger called on the crowd to urge “legislators and governors and mayors and aldermen and preachers to do what they’re supposed to do.”

“Will you work everyday?” he asked the crowd, which responded, “I’m in!”

Show Comments (
1
)
Comments are automatically closed two weeks after an article's initial publication. See our comments policy for more.
Kevin Murphy
3 years 9 months ago
This is what happens when you have a demoralized police force. Pfleger and Jackson and useless public displays aren't the solution.
More: Civil Rights / Racial Justice / Social Justice

Why is Zimbabwe conscripting its doctors? It's all about control.
The latest move to militarize Zimbabwean society appears an attempt not to reward career military officers who remain loyal to the ruling ZANU-PF party but to exert control over a different group of professionals who have been pressing for reform.
Marko PiriOctober 22, 2020 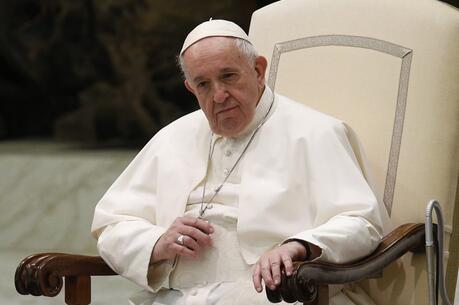