Cupich calls for church to promote solidarity after Trump victory 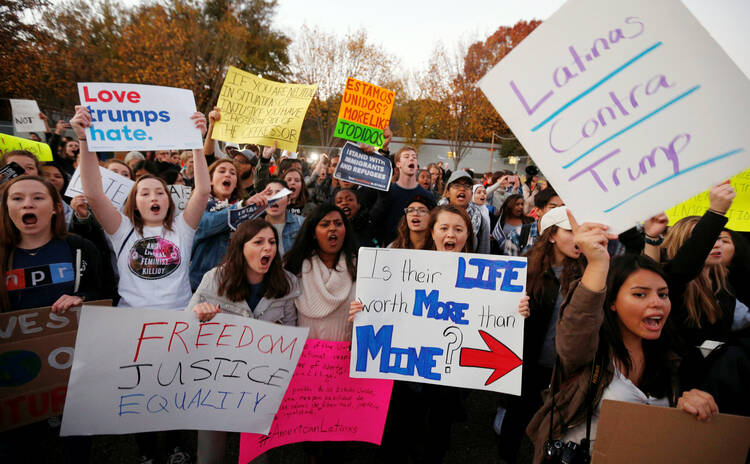 Civil divisions based on race have long been a problem characteristic of U.S. life. The cardinal-designate said that this election demonstrated, however, that “there has also been a division based on the disparity in the economy, and that is even more pronounced today as many feel trapped in a system that does not work for them.”

“The pope has spoken about this as it pertains to the entire world,” said Cardinal-designate Cupich. “There is inequity in the system, and many are of the opinion that there is no way forward for them or their families.

“In Chicago, that is experienced by those living in neighborhoods that are segregated, where people are convinced that they have no way of moving out and up onto another level on the economic ladder.”

How can the church respond? “I think that we have to first of all re-establish a greater sense of solidarity, revitalizing our democracy, as the pope said to the Popular Movements last week, and emphasizing the factors that unite us rather than divide us. My hope and aspiration would be that the leaders of the country now would be able to raise up those factors that make us a United States, and which draw us together. We don’t need more divisive language or programs and policies that are going to tear the fabric of the nation apart.”

He urged U.S. bishops to “speak in a pastoral way to calm the fears of people and let them know that we are advocates for them, that we will be their voice, defending them. So for starters, we have to come out [of the fall meeting in Baltimore] with that very clear message to our people.”

The election also indicated divides within the U.S. bishops conference. “I think we have always had that kind of division in the episcopal conference when it comes to how some take up the various issues and give single focus to some over others,” he said. “There are always some who would like us to make one issue, or a set of issues, the non-negotiables.

“The bishops have rejected that approach in each reframing of the ‘Faithful Citizenship’ document.”

But this election cycle a number of bishops issued statements that were close to outright endorsements of then-candidate Trump. That was a phenomenon that the cardinal-designate found worrisome. “We always spoke about principles and the issues,” he said, “but we never used the opportunity of addressing issues related to the campaign by actually naming and criticizing individual politicians by name.

“I think that’s a very disturbing departure from the way we have done things in the past,” the cardinal-designate added. “I am convinced that in the long run this tactic does not suit us well, and it really is not what we should be doing as bishops.” He said that he hoped the matter would be addressed at the fall meeting of the U.S. bishops in Baltimore; “otherwise our voice will be even further marginalized in the public square.”

From AP, CNS, RNS, Staff and other sources
Show Comments (
5
)
Comments are automatically closed two weeks after an article's initial publication. See our comments policy for more.
Lisa Weber
5 years ago
Solidarity is worth striving for but I doubt the president-elect will be able to lead a movement that produces solidarity because so many cannot follow him. I cannot follow a man who bragged about committing sexual assault or one with his evident narcissism and all that it entails. I see a continuation of his hateful misinformation in the appointment of Steve Bannon as his chief strategist. The solidarity I hope for is that of the centrists in the nation. Maybe we can get a coalition of those willing to take the middle ground and defend it against this president-elect who is still manifestly unfit to be president. It is the only hope I see.
Rudolph Koser
5 years ago
AMEN! And I can't understand how clergy, especially Catholic bishops can even come close to endorsing a sexual predator and liar.What a scandal!
E.Patrick Mosman
5 years ago
Mr Koser, "a sexual predator and liar." Assuming you are referring to Hillary, a congenital liar, and her husband Bill, a sexual predator and a co-President.
William Atkinson
5 years ago
The Bishops in America are the leaders of the American Catholic Church which is the largest religion in America, so it behoves that they be very careful in how they approach the new administration, many times in the past, especially with the supreme court, appointees were of one persuasion and once installed completely altered their judgements. Another various and serious problem in America is how the demonics of church peoples has changed in last 25 years. The largest catholic population is now in the southwest and the church has yet to catch up with creating diocese and metropolitian designations. the greater Los Angeles area from Arizona to Ocean, from Mexico to Bakersfield now has largest catholic population and 2 of Americas largest cities, San Diego is now 8th largest city and yet not even an archdiocese. It is also the largest Arab/Persian catholic population and becoming the largest Islamic area. There is a even greater need for pastoral care, priests and bishops. There are 8 large catholic universities on West coast all in great need of pastoral care. And now with uncertain political future for America the bishops must begin to strategize and form tactics to uphold safe and protection in the event that ill rhetoric on part of leaders leads to bad actions and violence in communities. The next 20 years will show minority communities becoming the majority and the majority, especially European white population,become the minority and the angst that comes from that shift. The American church and it's leaders have a massive job ahead of them to used dialogue and peaceful ways, before troubled waters lead to violence and evil results.
MARGARET O'NEIL
5 years ago
Once again, I have been profoundly disappointed by the Church and its so-called leaders demonstrating a lack of moral leadership. A sexual predator, hatefilled man did not even stir Church leaders to speak out. The Church it seems prefers to stay disengaged living in its hermetically sealed bubble rather than speak out against the moral bankruptcy of a man who speaks so disparagingly about women ( a group for which the Church hierarchy has always subtly and not so subtly showed disdain), minorities (ethnic, religious, disabled & orientation.) Perhaps that is because Church leaders have some affinity with these views, hold some of these groups in disdain, or simply prefer once again to cover theirs ears to get along to retain positions of privilege and power. It is so sad, depressing and clearly not what Jesus would do. They bring shame on the Church, while Rabbis say they will register if Muslims must and Baptist preachers of color announce from the pulpit that their communities will not be pushed back. Once again the Catholics will be complicit through silence