Does your Catholic faith shape your politics, or is it the other way around? 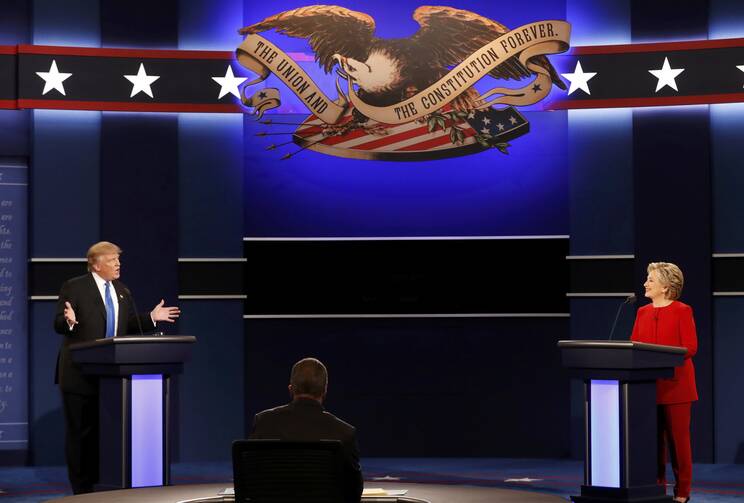 This demoralizing campaign is a reminder to never say or write anything you do not want to see on the front page or spread across the internet. Donald J. Trump demonstrated this when he was recorded boasting about kissing and grabbing women against their will.

On an entirely different level, hacked emails confirm that Hillary Clinton is more friendly to Wall Street in private than in public and that the Clinton Foundation has been a source of personal and institutional conflicts. In an ordinary campaign, the content and source of these emails would be major issues. But this election is increasingly about Mr. Trump’s character and fitness to serve; and his support is fading as voters, especially Catholics, learn more about who he is and how he acts.

In this disarray, Catholics are drawing greater attention. The WikiLeaks deluge included an email from 2010 in which Clinton staffers express disdain for conservative Catholics and evangelicals. Ridiculing other people’s religious choices is a bad idea, but in some progressive circles, it is more acceptable to mock Catholics and evangelicals than Muslims or Jews. The reverse seems to be true for some elements on the right.

An email from 2011 sent to John Podesta, chair of the Clinton campaign, called for a “Catholic Spring” to end what his correspondent called “a middle ages dictatorship.” Mr. Podesta referred to two organizations he helped to create for such a moment but said they lacked leadership and the movement “will have to be bottom up.” There is, in fact, a Catholic Spring, but it is coming from the top down, with the mission and message of Pope Francis. Also, one of the groups referred to, Catholics in Alliance for the Common Good, offers a progressive voice that challenges Democratic extremism on abortion, especially Mrs. Clinton’s call for taxpayer funding of the procedure. Ironically, some who seem appalled by progressive Catholics’ attempts to influence the agenda of the church engage in their own efforts to advance their causes and candidates among Catholics.

In September, the Trump campaign announced a “Catholic Advisory Group” and released a letter to Catholics. The 33 advisers include Republican officeholders, anti-abortion activists and conservative leaders but not a single Latino Catholic. Also missing are most—but not all—of the group of prominent Catholic conservative leaders who earlier called Mr. Trump “manifestly unfit,” a judgment reinforced by his statements that he will try to put his opponent in jail if he wins and will claim the election was “rigged” if he does not.

In his letter to Catholics, Mr. Trump promised to fight for core Catholic issues, but the poor, immigrants and refugees do not make the list. He pledged to “remain pro-life” but did not refer to defending traditional marriage. Even after the tapes and accusations related to sexual assault, some of his Catholic advisers insist that the candidate’s conversion from supporting to opposing abortion outweighs questions of character. They urge a focus on possible Supreme Court nominees over Mr. Trump’s words, which fan racism, demonize immigrants, support torture, disrespect women and target Muslim refugees.

Despite these uninspiring examples, we need committed Catholics working in campaigns, faithful Catholics running for office and outreach to Catholic voters. The question is: Does your faith shape your politics, or is it the other way around? Do Catholic principles offer direction and criteria for political choices, or are they just ways to package ideological and partisan preferences? We do not need Catholic cheerleaders for candidates who do not reflect our values but rather Catholics in public life who work within their parties to advance our principles.

After this depressing election, Catholic Democrats will need to persuade the likely Clinton administration to fix a broken immigration system and attack poverty instead of spending political capital to repeal the Hyde Amendment or conscience exemptions for ministries that serve the poor. Catholic Republicans should try to convince their party leaders to stop blocking immigration reform and move from impressive words to effective action on poverty. After brutally negative campaigns, Catholics with differing partisan and ideological commitments should search for new ways to protect human life and dignity, heal divisions and seek the common good in a bitterly divided nation.

Show Comments (
11
)
Comments are automatically closed two weeks after an article's initial publication. See our comments policy for more.
Andrew Di Liddo
5 years 1 month ago
The Church in the USA allowed itself to be manipulated by the GOP for decades creating legions of Catholic, litmus test, one issue voters. Now, this complicity of the Church with the Republican Party is coming home to roost as an increasingly complex world requires voters who have to think beyond a single issue and form their consciences based on an interior value system that most people have not done the hard work to form because they have become too used to a paternalistic hierarchy telling them what to do. Voila! Springs up the Bishop's Faithful Citizenship Program. Too little too late. The damage has already been done. Thoughtful, concerned citizens who actually study the issues and work for the common good are few and far between.... Can someone pass the remote? When is the next football game on?
Lisa Weber
5 years 1 month ago
I don't think it's reasonable to consider what the Clinton emails that were hacked by Russia said. What is said in private and meant to remain private is not going to reflect a person's public stance. Additionally, until Donald Trump's private emails are hacked and made public, the whole business is one-sided and unfair.
K E
5 years ago
It has been proven and is a lie that Russia hacked the Clinton emails and is being perpetuated in the Main Stream Media and the Hillary Clinton Campaign. This was a leak provided by our OWN government to Wikileaks. Further, the email forensics (headers showing the signed keys) that these emails are legit and have NOT been tampered with and is a contradiction to what DNC Chairwoman Donna Brazile claimed that she didn't send some of those emails. Liars all. Corruption and collusion. These people cannot be trusted with our national security. Not to mention that Hillary allowed her maid to print out confidential state dept emails. LOL. Please wake up.
Tom Fields
5 years 1 month ago
Hillary and the Democrats---and, unfortunately many Catholics--have backed the Democrats on abortion! People may be tired of hearing this but our taxes pay for the horror of out-of-control abortion. I heard a Priest say that "God may be very upset with us".--animation---but something to think about. Under the Democrats---poverty has increased----life in the inner cities is a horror--- The emails are an interesting insight into the REAL views of Hillary and the Democrats.
Andrew Di Liddo
5 years 1 month ago
Mr. Fields: I suggest you google the HYDE AMENDMENT. Your statement that our taxes pay for abortion is not accurate.
E.Patrick Mosman
5 years 1 month ago
Obamacare and Planned Parenthood both are funded by or receive US government funding,i.e.,taxpayers' money. Under Obamacare, federal funds can be used to cover abortions for pregnancies caused by rape or incest, or that endanger the mother's life. Abortions are available at many Planned Parenthood health centers, clinics, and the offices of private health care providers.
Edward Alten
5 years 1 month ago

This indeed is a tough year for a "born again" or "transformed" Catholic to vote or to be successful in healing even a small piece of a nation so broken and divided. Last night I heard the third debate and saw a glimmer of hope in the Democratic candidate when she said that it is terrible to have a late term abortion unless a mothers life is in danger. This is what the Catholic Church has always held about choices in the these cases of two lives at stake during giving birth. Without going into detail perhaps both parties could see their way clear to pass a modification law to Rowe vs Wade that would allow a woman to choose life if she would apply for a grant supporting her pregnancy in case she is below the poverty line. It is another level of bureaucracy but one that would let both Republicans and Democrats put their money where their mouth is about being pro-life and pro-choice at the same time. There are so many people or institutions on both sides that would or could support this idea (even financially) that even though abortion is legal a mother in poverty who sees no other option for her but an abortion is presented a financial incentive for not having one. I think many mothers would take that option.