Inmates need to be seen, heard and be near their loved ones 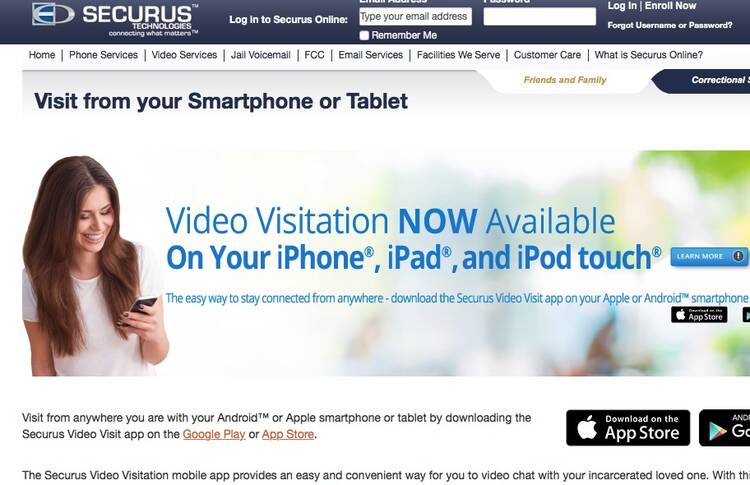 On Sept. 9 inmates at state and federal facilities across the country refused to go to work, in a mass protest over their living conditions. While the strike did not extend to those incarcerated in county jails, the same serious issues exist there too. One of the most troubling that you probably haven’t heard about is the current boom in video-only visitation.

Starting in the 1990s, for-profit prison technology companies like Securus Technologies, GTL and JPay started selling local jails on the idea of installing video screens by which jail occupants (who include generally those serving sentences of up to a year for misdemeanors and—the vast majority—those awaiting trial) could stay in contact with their families without their families having to visit.

Also, as with the phone services these companies already provided, jails would receive a commission based on the number of video visits they had, and/or the length of those calls. And these commissions added up to significant amounts of money. The International Business Times reported in March that Marion County, Fla., whose jail holds roughly 2,500 inmates, received over $550,000 in commissions in 2015 from Securus.

Companies like Securus could offer such generous kickbacks because the charges for video visitation remains unregulated by the federal government. In some jails a company might charge as much as $1 a minute for a video visit; most require a 20 or 30-minute minimum fee. (This, despite the fact in September last year an Ella Baker Center for Human Rights report found that 1 in 3 families of the incarcerated go into debt to cover their communications and visitation costs.)

In the meantime, in 2015 the Federal Communications Commission came down hard on the prison communications industry for grossly overcharging for phone calls. According to Jim Lindburg, legislative director of the Friends Committee on Legislation of California, “We had a situation in California where a prisoner could call an uncle in North Dakota and the uncle would pay maybe $5 to talk for a half an hour; but if that same prisoner called [locally to] his mother in Monterey, because the FCC had not regulated rates within the state, it might cost his mother $20 to talk for five minutes.”

In capping the rates at correctional facilities, the F.C.C. radically diminished a major spigot of income for both the for-profit companies and the local jails who had come to rely on the commissions. One result has been, as Lindburg explains, “the industry promoting video-only visitation as a way for local sheriffs to make up for some of that lost commission.”

Today, it’s a major problem. According to an extensive 2015 study of the for-profit video visitation industry by the Prison Policy Initiative, an incredible 74 percent of jails that have installed video visitation have ended up eliminating in-person visitation entirely. (There are currently over 500 prisons that use the service in 43 states plus the District of Columbia.) In these locations even when family members are local or come to the prison because they don’t have high-speed internet access (which P.P.I. found often to be the case for families of the incarcerated), they are forced to sit in booths and communicate by video screen with loved ones who may be sitting just the next room over.

Almost two years later, P.P.I. says that percentage remains the same. Securus alone had demanded that the 170 prisons with whom it had contracts maintain video-only visitations, but backed off after the P.P.I. study and negative press.

It might seem like talking via video screen is not all that different from sitting face to face before a sheet of glass. But studies have shown that in-person visitation improves both the attitude and future situation of the incarcerated in a way that video visitation does not. For instance in 2011 a University of Minnesota study on recidivism found “the hazard of reconviction for a felony was 13 percent lower for the visited inmates” and 25 percent lower for those in prison on a parole violation.

Likewise for families, seeing their loved one in person makes a huge difference. From the P.P.I. Study: “They still feel as if with that glass barrier, they're having a more personal visit. They can still put their hand up to the glass, and their incarcerated loved one can put his or her hand up to that same piece of glass. Or they can see that person's breathing. Different things like that that are just lost.”

Successful video visitation also requires things that an in-person visit does not, especially a high speed, uninterrupted internet connection. Anyone who has ever used Skype knows how challenging that can be and can imagine the immense and unnecessary frustration video visitation adds to both inmates and their families—let alone the problems it creates for lawyers trying to prepare for court. (Again, over half of those in county lock up are only there awaiting trial.)

Despite industry spin to the contrary, video visits also do not offer the privacy of in-person visitation. Video screens are often placed in group cells or public spaces, where others can both be seen and listen. “We’ve heard from some prisoners,” says Lindburg, that their cellmates “sit listening and sometimes making comments.”

And with video visitation in place, prisons are now able to monitor and record visits, as they do phone calls. (Indeed, GTL actually promotes itself in terms of its ability to do so.) And while attorney/client conversations are supposedly exempt, less than a year ago the Intercept received a cache of 70 million calls hacked from Securus servers.

An astonishing 14 million of them were conversations between inmates and lawyers. A year earlier, lawyers in Travis County, Texas, accused law enforcement officials of turning over attorney/client conversations taped by Securus to the local district attorney.

In California, SB 1157, a bill requiring that every county jail have in-person visitation has received bipartisan support. It’s an issue of particular significance here, where county jails have expanded tremendously in the wake of court orders that California decrease the number of inmates in its state prisons.

Lindburg points out that many of these facilities had requested and received large sums in recent years to increase their space for inmate programming, given the fact that their populations were growing in size and remaining years longer. “It’s terribly ironic,” he says, that they would request such money for programming space and then refuse to allow inmates to have visitors.

The California Catholic Conference spoke out in favor of the legislation, arguing “in-person visitation is essential to a person’s successful reentry into their community” and “is also important for family members and loved ones on the outside, especially children, who also struggle with the incarceration of their loved ones.” After passing in both houses of the legislature, the bill now waits only on the governor’s signature.

While video visitation clearly offers a useful supplement to in-person visitation, video-only visitation is another example of the disturbing American trend to see those incarcerated—no matter what the crime and even before conviction—as no longer worthy of human decency or respect.

To have committed a crime is too often understood as meaning society no longer has any responsibility for you; for-profit businesses can safely go to work bankrupting your families, prisons themselves pay you nothing to work all day and sitcom characters at night offer endless jokes about you dropping the soap.

Tom Maziarz, a St. Clair County Missouri manager of purchasing told the “St. Louis Post-Dispatch” about video visitation in February 2014: “A dollar a minute strikes me as a fair price. I guess it depends what viewpoint you’re coming from. The way I look at it, we’ve got a captive audience. If they don’t like (the rates), I guess they should not have got in trouble to begin with.”

“I think the public believes that people do need to be punished and held accountable,” Lindburg says. But physical isolation and price gouging take that too far. “To not be able to bond with your family and with your children...family is still the basic cultural unit, and they’re in the best position to provide support when a prisoner is released back into the community.”

“If a hospital all of a sudden were to do this, were to say we’re not going to allow you to visit patients in the hospital except through a very small video screen, there would be outrage,” Lindburg says.