I didn't think this election could get crazier. Then I Googled each candidate and 'Jesuit.' 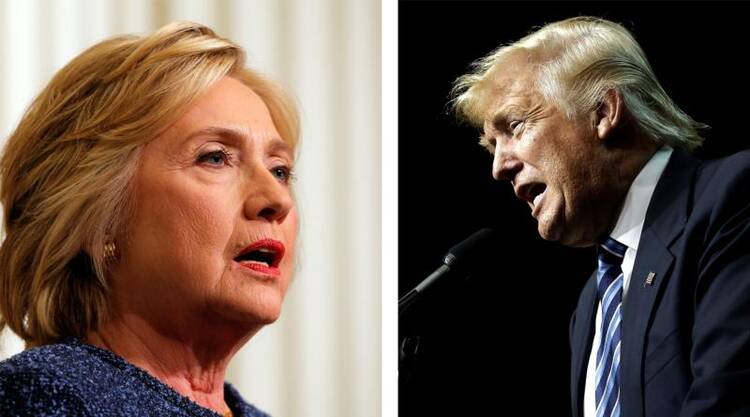 In preparation for the start of the primary season, the next “big step” in the continuing long dark nightmare that is the American political “process,” over the weekend I was trying to come up with some facts you might not already know about Donald Trump, a candidate so overexposed he makes Hillary Clinton look like that shy kid who sat in the back of the class eating her own hair.

I had not gotten very far—did you know Mr. Trump’s middle name is John? That he’s the fourth of five kids? That he’s a teetotaler?—when I came upon something unexpectedly interesting for readers of America. Donald Trump went to the Jesuit-run Fordham University. It’s true: After being away five years at military school, Mr. Trump moved back in with his folks in Queens and did his first two years of undergraduate education at Fordham before transferring to the University of Pennsylvania’s Wharton School.

Online, there’s some speculation about how well he did at Fordham, assorted memories of his fellow students at both schools as to how forgettable or unnoticed he was. In one place I found a quote from one of his many books about his time at Fordham: “I began by attending Fordham University,” he writes. “But after two years, I decided that as long as I had to be in college, I might as well test myself against the best.” Always a charmer, the Donald. On behalf of all past, current and future alumni of Fordham University, may I wish him the very best in the race ahead and in all his endeavors as a higher life form.

But that’s not the end of the story. See, I figured somewhere online there must be more about him at Fordham. It was two years of his life, after all. So I Googled “Donald Trump Jesuit.” The top response was a link to a Reddit post from five months ago entitled “Donald Trump: Secret Jesuit Agent for Commander-in-chief?”

Intrigued, I read on: “Could it be though, that Donald Trump is a ‘false flag candidate’ being used to secure the vote of the ever-increasing independent constituency in order to inevitably lull the U.S. into a false sense of positive political novelty and thus to subsequently impose Jesuitical right-wing fascism leading to a nation-wide race war as devised by the masters of class adversarialism, the Sons of Loyola?”

Now, if you don’t understand most of what is going on in that paragraph, let me break it down: “A false flag candidate” is someone who seems to represent one point of view, but actually is working for an entirely different agenda/organization. It is actually not a new critique of Trump; about six months ago Gawker’s conspiracy blog (of course Gawker has a conspiracy blog) Black Bag posted this article suggesting Trump was in the race strictly in order to get Hillary Clinton elected.

Moving on: “The ever-increasing independent constituency” means the electorate, which this writer believes more and more flexible about who it will vote for, especially given Mr. Trump’s “positive political novelty.” Oh yes, especially.

But then things really get crazy. “Jesuitical right-wing fascism” would make sense, if by “Jesuitical” was meant playing semantic games, the worst version of casuistry. But this writer actually means to say that Jesuits are pulling the strings, so as to begin a race war...

I know, it’s just one crazy link. Except it’s the one ranked highest by Google.

It is also not the only post in the top 10 with a similar message. In fact only two of the top ten links about Donald Trump and Jesuit don’t have something to do with the apparent Jesuit-Trump conspiracy that no one has had the courtesy to let me know we are in on. (If you only have time to sample one piece from this magical universe, may I suggest the first few minutes of this YouTube post about why, during the “Jesuit Paris Attacks,” a woman believes Donald Trump got switched out by his clone. It begins “I was watching Fox News this morning.”)

My initial amusement with my apparent role in a worldwide fascist conspiracy sated, I thought I would try to see if any of the other main candidates for president had a Jesuit connection. I started with Ted Cruz. One of the first 10 links was from Jesuit Refugee Service USA. One was from The Jesuit Post (Huzzah!).

Marco Rubio was a little better, with pieces from Religion News Service, Christianity Today and Mother Jones on his religion and politics. But the number one link was to a mysterious, constantly freezing video entitled “Marco Rubio a TUTH JESUIT” (which I would explain if I had been able to watch the video and understand it). Others in his top 10 links included “Illuminati Puppets: Proof that America is a Captured Operation” and a link to a Ron Paul forum where someone says that Rubio is a “Catholic imposter jesuit RINO [Republican in Name Only].”

On the Democrat side, six of the top 10 links for “Hillary Clinton Jesuit” are about the Jesuit world conspiracy, which I guess should be no surprise given the Clinton legacy as conspirators. (Let me just come clean right here and now: the 22 top secret emails that Ms. Clinton sent from her private account went to me. And they were AMAZING.)

Nevertheless, I have to admit I was impressed by how high some posters raised their game. One fantastic 2012 post from “Anonymous Coward” on a forum of the UFO/Conspiracy website Godlike Productions crowed, “Jesuitess Hillary Clinton Talks About Stealing World’s Energy Supplies”: “May I remind you that all these proxy puppet politicians are trained and controlled in foreign policy by Georgetown ‘military fortress’ University. Who controls this hidden and veiled fortress? Jesuit soldier, Thomas Smolich SJ for the Superior General of the Jesuit Order at the Curia Generalizia in Borgo Santo Spirito. The Jesuits have dominated the U.S. for decades and forever will in their Washington D.C. which represents ancient Rome. The land being Roman Catholic owned going back to the Pope and Carroll families. Washington D.C. is made up of part of Virginia and part of Maryland giving you the Virgin Mary. In 1663 property records it was known as Rome. The Carroll family founded Georgetown University.”

(I feel confident California Jesuit Father Tom Smolich would be very pleased to have just one little portion of the global power described here; it could go a long way to helping in his current job as head of the Jesuit Refugee Service.)

Of all the major candidates, only Bernie Sanders emerges more or less unscathed from our nefarious ventures. Yes, the sixth link is “High-ranking Jesuit-controlled Freemason Scum Bernie Sanders Exposed.” But the rest are all more or less straightforward; many (including this great piece from America) are in fact about how often Sanders quotes Pope Francis, and whether the pope might endorse him. (You heard it here first: The pope will not be endorsing anyone, in part because he believes Americans like all members of the world community have to have the maturity to choose responsibly for themselves. I cannot wait for him to meet President Trump.)

Before this weekend, I didn’t think it was possible that this election could actually be presented in a way that was even crazier than the reality. Nice job, conspiracy Internet.

And you know, when you think of the endless debates, the ridiculous behavior of the last seven months and the nine months more of it through which we’ve agreed to put ourselves, maybe these guys have a point. How can so much nonsense and distraction be completely unscripted? There must be someone pulling the strings, right? It would certainly be more satisfying.

Not that I’m admitting anything.

@PopCulturPriest
Show Comments (
5
)
Comments are automatically closed two weeks after an article's initial publication. See our comments policy for more.
JR Cosgrove
5 years 12 months ago
Actually I believe it is "Left Wing Jesuit Fascist Conspiracy" after reading this site for several years. I never understand the use of "right wing" since it really does not describe anything in American politics.
William Rydberg
5 years 12 months ago
Back in the seventies Cheech and Chong had a skit about two supposed Russians walking in a snow storm, after a number of dialogues involving touching and culminating in tasting the thing on their path, they end up with a punchline to the effect, at least we did not "step in". That skit was composed around the time when America Magazine was largely guided by serious, well formed in my opinion, mature outward looking Jesuit Fathers, hands on the America Editorial Board along with an Editor named Fr Donald Campion S.J. Turn to today, to an America Magazine largely run by individuals, that in my opinion, are largely unseasoned in the ways of the Jesuit Order, yet are expected to take a front seat. I pity these men because I know that they are reacting, and doing their best. While the American Jesuit Fathers, step back and do nothing. It seems that the only S.J. Model available to these men includes an Editor at Large that dominates by finding humour in the dreadful state of Catechetical knowledge in North America today. Essentially, dining out in part, in my opinion, on this great void of contemporary catechetical teaching. In reality, a truly existential Catholic sadness is all around about the faith in North America today. Ask any Catholic Religion teacher.. A person, in my opinion, likely inadequately formed by his Jesuit Superiors in my opinion. A few People now writing in the magazine, seemingly oblivious about the effects of what "telephone" will amplify concerning funny stories even now recirculated again and again-with changes. Things said, that for a moment, found funny by the adequately catechised, but left "out there" to be quoted without understanding by the inadequately catechised, or worse, changed and re-quoted by enemies of the Church in my opinion. Responsibility in my opinion, for this sad state of affairs, likely resides with the New York based Provincial. But that is up to the Jesuit Fathers to address. I just give my opinion on what I read, I don't know the situation being from the outside. Meanwhile, the advice that in my opinion for the crew at America Magazine today is if you see a big steaming pile, it's better to avoid it, rather than "step in" . Thanks though, to the many contributors today that, in spite of the lack of senior Jesuit Direction, strive for an America Magazine like in the days of Fr Donald Campion S.J. Just my opinion. In Christ, One day prior to the Feast of the Presentation of the Lord.
Chuck Kotlarz
5 years 12 months ago
Billionaires and ballots...the greatest show on earth.
Barbara DeCoursey Roy
5 years 12 months ago
LOL, Jim McDermott. You keep America from taking itself too seriously.
Matt Nannery
5 years 11 months ago
Well, Donald Trump may not be a secret Jesuit, but Rick Santorum is a (semi) public Legionary of Christ and certainly thinks that old church/state separation thing has to go...