Who Speaks for Islam?: Muslim authorities call for an end to militant violence.

Who Speaks for Islam?: Muslim authorities call for an end to militant violence. 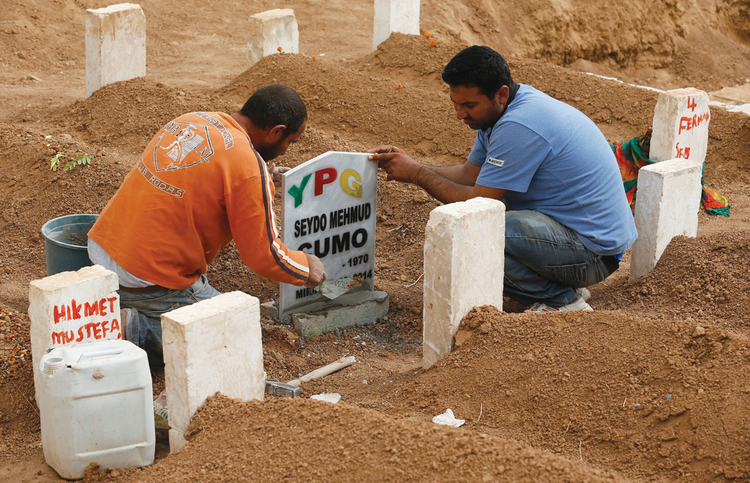  FINAL REST. Men place a headstone at the grave of Seydo Mehmud Cumo, 44, at a cemetery in Suruc, Turkey, Oct. 11. Cumo was a Syrian Kurdish fighter killed in clashes with Islamic State militants in Kobani, Syria.

‘Why don’t they speak out?”

Faced with the savage persecution of Christians and other religious minorities in Syria and Iraq, that is a question one often hears as the atrocities of the so-called Islamic State continue in the name of Islam. Why aren’t moderate Muslim leaders speaking out against the Islamic State (also known as ISIS or ISIL)? Until recently the response to this question has been that Muslims are indeed speaking out, and loudly. But there have been two major obstacles to their voices being heard.

First, Islam is not a centralized religion like Catholicism; there is no single person or institution that speaks for all Sunnis or all Shiites, much less for all branches of Islam. When the pope speaks out, he speaks for more than a billion Catholics. There is in Islam no person or structure parallel to the pope or the secretary general of a religious body. Second, many of the voices raised against crimes targeting religious minorities have appeared in newspapers and languages rarely picked up by news agencies that publish in Western languages. It has not been the case that no one was speaking out but that no one in the West—for various reasons—was listening.

The situation has changed considerably in recent months, and the non-Muslim world needs to take notice. Muslim scholars as well as official and unofficial organizations have been issuing significant condemnations of the movement called the Islamic State and its self-declared caliphate. Grand Ayatollah Ali al Husayni al-Sistani, the leading Iraqi Muslim authority, issued a brief fatwa in June condemning the persecution of Christians and Yazidis and inviting them to seek refuge in southern Iraq.

On the Sunni side, Muhammad Haniff Hassan and Mustaza Bahari, two Muslim scholars, published a list of 86 organizations and individuals that have spoken out against the Islamic State. The list contains statements made by the Grand Muftis of Syria, Iraq and Saudi Arabia and the political leaders of Indonesia, Malaysia, Morocco, Saudi Arabia and Iran, together with numerous Islamic universities, societies and individual scholars.

The Vatican News Service (07/26/14) and Eurasia Review (10/1/14) ran articles on the many different Muslim groups that are responding to the challenge of the Islamic State, declaring it illegal by the standards of both Islamic and international law. The most detailed and perhaps most devastating critique and condemnation of the Islamic State, however, was released in English in September in an open letter to “Dr. Ibrahim Awwad Al-Badri, alias ‘Abu Bakr Al-Baghdadi,’ and to the fighters and followers of the self-declared ‘Islamic State.’” Al Badri is the leader of the Islamic State who declared himself caliph on June 29, 2014. He has changed his name several times, each time giving himself a grander pedigree, ultimately linking himself to the tribe of the Prophet by taking on the name Al-Qurayshi. The letter pointedly acknowledges none of his recently assumed names, to say nothing of his title as caliph.

The letter was originally written in classical Arabic and is clearly intended first and foremost for Al-Badri and the fighters of the Islamic State. Even a cursory reading indicates that the document was not produced primarily for media distribution. For the average reader, especially in the West, the document is ponderous, detailed in the extreme, foreign in tone and ever so slightly reminiscent of the language of papal encyclicals. It is most assuredly not a document that translates well into sound bites. This is precisely what makes the document so extremely important. Muslim scholars and non-Muslim scholars of Islam will be studying this document for some time.

It is often said, with some justification, that Islam does not presently have a discipline similar to what Christians call theology. Instead, Islam has developed a highly sophisticated system of jurisprudence called fiqh. For Muslims, jurisprudence is not merely law; it is the systematized guidelines for living a life in conformity with the will of God. Never purely theoretical, Islamic jurisprudence is geared toward solving practical problems and balancing a 1,400 year tradition with modern exigencies. Both Sunni and Shiite Muslims have developed over the centuries an extremely complex set of principles (the “pillars of jurisprudence”—usūl al-fiqh) to help scholars address contemporary problems. There is a hierarchy in the application of the principles of jurisprudence that is clearly evidenced in the letter.

The first principle of Islamic jurisprudence is, not surprisingly, the Quran. A sophisticated exegesis searches the Quran for guidance, taking into account the language, the circumstances in which the verses were revealed and their context within the entire Quran. In second place is the Sunna. The Sunna is a vast collection of sayings by the Prophet or stories about the Prophet related by his closest companions. There are several “canonical” collections of the Sunna and an exacting science of determining the value and relevance of any given tradition. There are traditions that are “strong” and those that are “weak.” This difference appears in the letter. Therefore, traditions have to be carefully sifted out and evaluated before they are included in an argument. Third, there are the examples from Islamic history—a type of precedent. Last, there are interpretive principles that help the scholar deal with situations for which there are no clear precedents. These are in decreasing order of authority. The Quran is the highest authority, followed by the Sunna. History and analogous reasoning in unprecedented situations are of a lesser authority.

The letter deals with 24 topics. The opening topics lay the ground for or against the Islamic legitimacy of the Islamic State. As would be expected, jihad receives considerable attention, with subtopics like rules of conduct of jihad, intention, goal, killing of innocents, killing of emissaries, etc. Each topic is treated in detail, starting with the Quran and working down through the contemporary situation.

The letter declares the killing of innocents to be mūbiqat, a mortal sin (No. 6). The killing of emissaries, a category that includes reporters and aid workers, is haram, or totally forbidden (No. 7). In dealing with Christians the letter states: “These [Arab] Christians are not combatants against Islam or transgressors against it, indeed they are friends, neighbors and co-citizens. From the legal perspective of Shariah law,they fall under ancient agreements that are around 1,400 years old, and the rulings of jihad do not apply to them” (No. 10). The paragraph after that declares that the Yazidis, whom the Islamic State fighters consider “devil worshippers,” are, in fact, “people of the Scriptures,” together with Jews and Christians, and hence protected.

The language of the letter, especially in English translation, contains expressions and references that readers not familiar with Islam could easily overlook. In the paragraph dealing with slavery, the letter recognizes that the Islamic State has taken and sold human beings as slaves. The letter states, “You have revived strife and sedition, and corruption and lewdness on the earth” (No. 12). The word sedition in the English text has the Arabic word fitnah after it in parentheses.

The notion of fitnah in Islam evokes very powerful feelings. Fitnah is rebellion, the breakdown of all social and moral norms and total chaos. After the death of the Prophet, some Arabian tribes abandoned Islam and fought against the Muslims. That was called the First Fitnah. Islamic law provides for the relaxation of many rules in order to avoid fitnah. In Islamic jurisprudence, fitnah would never be the lesser of two evils.

The second expression is “to spread corruption (fasād) on the earth.” Several times in the Quran the expression “to spread corruption on the earth” appears, and it is looked upon as the greatest of crimes and the crime subject to the harshest penalties (5:32, 34; 7:57, etc.) Anyone familiar with Islamic legal language would recognize that this is the harshest accusation one Muslim can make against another.

At its publication in September 2014, the document was signed by 126 Muslim leaders and scholars. Several Muslims have added their names since the publication.

An Alert From Authority

It is important to keep several things in mind when reading the document. First and foremost, it is an intra-Muslim document. It is not an Islamic statement on worldwide terrorism, a judgment on jihadis all over the world or a judgment on any global issue, regardless of what non-Muslims in the West might want it to be. It is addressed by a large number of Muslim scholars to a particular Muslim and his movement. While by no means the only Muslim judgment against the Islamic validity of the Islamic State, it is by far the most specific, the most concrete and the one in the most traditional form. There is a 24-point executive summary for those who do not wish or are not able to follow the tight reasoning of an Islamic fatwa. The 10th point is: “It is forbidden in Islam to harm or mistreat—in any way—Christians or any ‘People of the Scripture.’” The seventh point is: “It is forbidden to kill journalists and aid workers.”

As a religious ruling and as an intra-Muslim document, it would be unfair to look in the document for any support of things like U.S. policy in the Middle East or the civil war in Syria. Muslim religious documents are no more obliged to approve of U.S. foreign policy than are documents issued by the Vatican. In point of fact, in the last 15 years the Vatican has on several occasions disagreed with U.S. policies in the Middle East. It would be unrealistic and unfair to expect more of Muslims.

While the document is extraordinary by any standard, it would be unwise to either overestimate or underestimate its authority. As mentioned earlier, there is no one person or institution that speaks authoritatively for all Muslims. It is to be expected that there will be Muslims who disagree with the document or reject it entirely. Nevertheless, there is in Islam a principle called ijma‘, “consensus,” similar to the Catholic principle of sensus fidelium.

According to this principle, if Muslims agree on something, they are immune to error. Of course, the vast majority of the instances of ijma‘ are judged after the fact—the community came to an agreement on something in the past and it has become common practice. There are, however, no criteria as to exactly how or when an ijma‘ is achieved. Nor is there any given number of Muslims or percentage thereof who must agree on something for it to constitute a consensus. Nonetheless, the unusually varied and large number of Muslim leaders and scholars who have come out against the Islamic validity of the Islamic State and who have condemned its atrocities must carry great weight in the Muslim world.

While there may be some who do not agree with everything in the document or some who do not think it goes far enough, it remains a masterpiece of Islamic juridical thought and procedure and a document eminently worthy of the respect and attention of all religious people who are committed to interreligious understanding.

This article also appeared in print, under the headline “Who Speaks for Islam?,” in the March 16, 2015, issue.