Skip to main content
Politics & SocietySigns Of the TimesJuly 7-14, 2014 issue

Private investing for the common good? 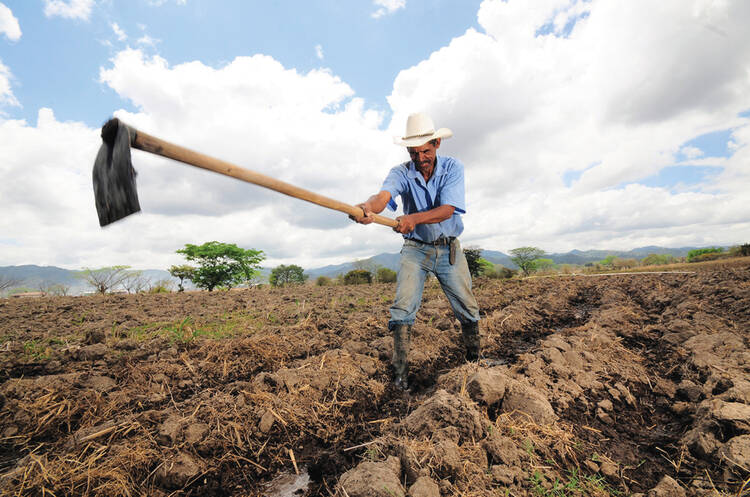 Can private investment be put to work against poverty? A farmer digs irrigation channels in Alauca, Honduras.

While billions have been spent on direct efforts to bring the worlds of the haves and the have-nots closer together, perhaps the largest movement in history of people out of abject poverty was achieved over the last three decades in China. In that socialist state, capitalist practices created vast riches for a few but also new wealth for millions of workers. The resulting improvements in living standards, however, were an almost collateral outcome, and they were not achieved without a large degree of social and ecological disruption.

What if investors were intent on using the mechanism of the free market and the power of the economy to improve social and environmental outcomes from the outset?

That is the challenge thrown down by a new development model that seeks to turn the power of the market economy to social good. So-called impact investing puts private capital to work jump-starting for-profit entities or supporting nongovernmental organizations with the intention of creating fiscal profit that can be tracked in accounting books but also a social profit that can be observed in improved living standards or environmental conditions in developing nations around the world. Impact investing was the focus of a conference on June 16 to 17 in Rome, sponsored by the Pontifical Council for Justice and Peace, Catholic Relief Services and the Mendoza College of Business of the University of Notre Dame.

The conference drew participants from the worlds of high finance, industry and emergency disaster relief. One attendee, Carolyn Woo, president and C.E.O. of Catholic Relief Services, said finding sources of private capital that can be directed toward impact investing has become especially important in an era of reduced economic expectations among individuals and governments. “We have to be creative,” said Woo. “We can’t rely [exclusively] on donations and grant money because both of those streams are diminishing.”

While much of the direct service that relief and development agencies like C.R.S. provide will inevitably rely on donors—it is hard, after all, to locate a business model that satisfactorily responds to a typhoon—Woo suggests that other programs C.R.S. helps start up or support could benefit from lessons learned by for-profits with an eye on creating long-term sustainability. “How can these ministries be structured like a business, but in a way that has a deep conscience?” she asks.

There are examples of such models from the past and the contemporary Catholic world, she says—self-supporting monasteries that market beers, cheese and even coffins, for example, or fair trade product marketing.

“Not all social ministries can be handled in this way,” she adds. “Some are very high risk that will never deliver returns. I’m not talking about replacing grants or donations; we’re not asking anyone to stop giving to the church,” Woo says. But what about repurposing 5 percent of your retirement account to impact investing? Woo says that kind of commitment among individual and institutional investors would add private capital to the quiver of groups like C.R.S.

According to Woo, while the idea shows great promise because of its sustainability and scalability, impact investing requires patience as human capital is developed and would have to set in place strong certification policies—can social “pay-offs” be verifiable?—and vigorous monitoring to prevent exploitation of the communities and people being affected.

The conference was joined by Pope Francis who as usual was not at a loss for provocative thinking. “It is important that ethics once again play its due part in the world of finance and that markets serve the interests of peoples and the common good of humanity,” he said on June 16, calling it “intolerable” that “financial markets are shaping the destiny of peoples rather than serving their needs, or that the few derive immense wealth from financial speculation while the many are deeply burdened by the consequences.” He denounced in particular speculation on food prices as “a scandal which seriously compromises access to food on the part of the poorest members of our human family.”

Kevin Clarke
@clarkeatamericaclarke@americamagazine.org
Show Comments (
3
)
Comments are automatically closed two weeks after an article's initial publication. See our comments policy for more.
Bruce Snowden
7 years 3 months ago
Scrolling the sites, "Private Investment For The Common Good," caught my attention, propelling forward the following post. As Kevin Clarke pointed out, Holy Father Francis is "not at a loss for provocative thinking." Some of the ministerially provocative things, in my opinion too often undersaid, but not by the Pope, or at least anemic in sinewed follow-through, may apply as follows. Pope Francis has said, "Go to the edges. Draw close to the poor, the uneducated, the sick and impaired, the intellectually challenged, the frail elderly, especially those suffering from dementia and serve them." It would be great if private investment for the common good (public investment too) were initiated on behalf of the brotherhood/sisterhood of humanity under the Fatherhood of God. Unfortunately too often one word gets in the way - SERVE. I'm afraid this can never take firm root until as someone has said humanity begins "discovering God as the eternal Friend." Therein "we unearth the mystery of freedom, vocation, and love."
Tammy Gottschling
7 years 3 months ago
This is a very constructive article. In attempting to be more palpable with where Pope Francis is leading [we] the Church I find contingency approaches work beautifully because it avoids excessive conformity. Again, nice article.
John Walton
7 years 3 months ago
Framework which allows for free, and responsible markets? Simply put -- the U.S. Commercial Code, a rule of law, not the whims of dictators.