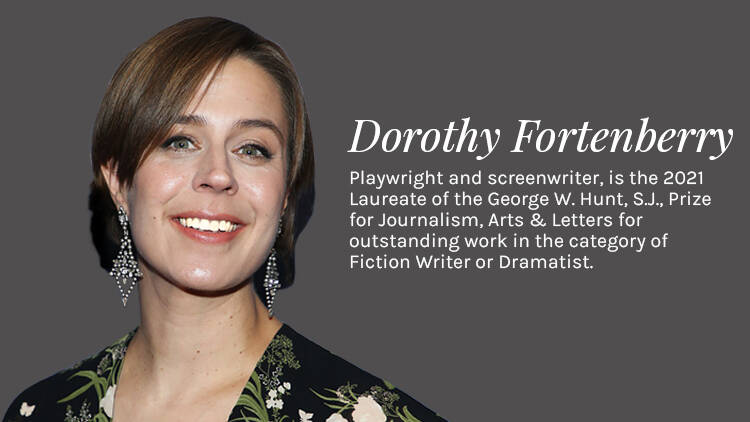 New York, N.Y. – The trustees of Saint Thomas More Catholic Chapel & Center at Yale University and the directors of America Media are pleased to announce that Dorothy Fortenberry, playwright and screenwriter, is the 2021 Laureate of the George W. Hunt, S.J., Prize for Journalism, Arts & Letters for outstanding work in the category of Fiction Writer or Dramatist.

“Dorothy is a highly accomplished and well-respected writer for the stage and on screen,” said Matt Malone, S.J., president and editor in chief of America Media, “and the committee is delighted to be able to recognize her talents and contributions.” The Hunt Prize recognizes the work of young writers whose work inspires and promotes the best of Roman Catholic intelligence and imagination,” said the Rev. Ryan Lerner, Chaplain of Saint Thomas More Chapel & Center at Yale, “and Dorothy’s ability to engage with important topics in creative, effective ways makes her a worthy and timely recipient of the 2021 Hunt Prize.”

Ms. Fortenberry will be awarded the $20,000 prize on the evening of September 23, 2021 at a ceremony at Saint Thomas More Chapel & Center at Yale University. In addition to receiving the monetary prize, she will also deliver an original essay at the ceremony that will later be published as a cover story in America magazine.

Dorothy Fortenberry has worked for four seasons as a writer/producer on Hulu’s award-winning adaptation of Margaret Atwood’s novel The Handmaid’s Tale. Before that, she spent three seasons writing on CW's hit young adult series The 100. Currently, she is a writer and executive producer on Extrapolations, an upcoming limited series for Apple TV+ that focuses on climate change. She has developed original series, adaptations, and screenplays for Bravo, Paramount, Hulu, and MGM.

Ms. Fortenberry is a winner of the 2011 Helen Merrill Emerging Playwrights Award. Her plays include Species Native to California, Partners (Susan Smith Blackburn Award nominee), Mommune, Status Update, Caitlin and the Swan and Good Egg. Her work has been developed at Arena Stage, Ars Nova, Geva Theatre, and the Oregon Shakespeare Festival, among others, and produced by theaters across the country, including the Actors Theatre of Louisville and IAMA Theatre Company in Los Angeles. Her new play The Lotus Paradox, a commission from Yale Rep, will receive its premiere at the Warehouse Theatre in Greenville, South Carolina in 2022. She has received an EST/Sloan commission, a fellowship to the MacDowell Colony, a residency at the Djerassi Program, and a Walter E. Dakin Fellowship at the Sewanee Writers’ Conference.

Ms. Fortenberry is a graduate of Harvard College, the Yale School of Drama and is a past recipient of a Rockefeller Fellowship, which allowed her to live in Haiti and work with formerly homeless youth.

The George W. Hunt, S.J., Prize for Excellence in Journalism, Arts & Letters, was established in 2014 to honor the memory of George W. Hunt, S.J., the longest-serving editor in chief of America magazine, and to promote scholarship, the advancement of learning and the rigor of thoughtful, religious expression; to support and promote a new generation of journalists, authors and scholars; and to support the intellectual formation, artistic innovation and civic involvement of young writers. Previous recipients of the Hunt Prize are: Dr. Philip J. Metres III, of John Carroll University; Elizabeth Dias, of The New York Times; Liam R. Callanan, of the University of Milwaukee-Wisconsin; Phil Klay, of The American Scholar; Mary Szybist of Lewis & Clarke College, and Emma Green, of The Atlantic.

Saint Thomas More Catholic Chapel & Center at Yale Universityserves the Catholic community at Yale by creating a vibrant and welcoming community through worship and service; cultivating informed faith and spirituality; engaging in reflective discourse on faith and culture; advancing the church’s mission of promoting social justice; and participating in the global church’s life and witness.

America Mediaprovides a smart, Catholic take on faith and culture, as the leading provider of editorial content for thinking Catholics and those who want to know what Catholics are thinking. America Media leads the conversation about faith and culture by producing excellent, unique, relevant and accessible content across multiple platforms. Our contributors are the principal figures in the American Catholic Church today, the decision-makers and opinion leaders who drive the ecclesiastical and civic debate about religion, society, politics and the arts. Our flagship magazine, America, has been published continuously since 1909, making it one of the oldest periodicals in the United States.