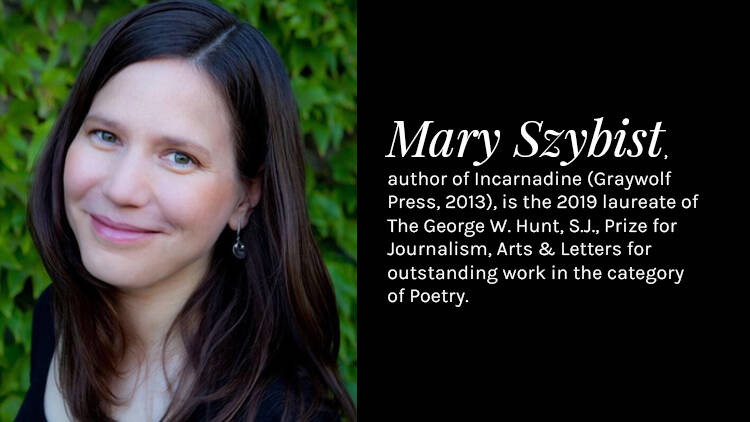 New York, N.Y. – The trustees of Saint Thomas More: The Catholic Chapel & Center at Yale University and the directors of America Media are pleased to announce that Mary Szybist, author of Incarnadine (Graywolf Press, 2013), is the 2019 laureate of The George W. Hunt, S.J., Prize for Journalism, Arts & Letters for outstanding work in the category of Poetry.

“Mary is a young, dynamic and accomplished poet,” stated Matthew F. Malone, S.J., president and editor in chief of America Media, “and the committee is delighted to be able to recognize her preternatural talent with the written word.”

“The Hunt Prize is meant to recognize the work of young writers whose work inspires and promotes the best of Roman Catholic intelligence and imagination,” stated the Rev. Ryan Lerner, chaplain of Saint Thomas More Chapel & Center at Yale, “and Mary’s clear articulation, profound expression, and highly engaging writing distinguish her and make her a worthy laureate for the prize.”

Ms. Szybist will be awarded the $25,000 prize at a ceremony on Sept. 21st at the Catholic Imagination Conference at Loyola University, Chicago. In addition to the monetary prize, she will also deliver an original piece at the ceremony that will serve as the cover story of America  magazine in an ensuing issue.

A native of Pennsylvania, Mary Szybist earned her B.A. and master of teaching degrees from the University of Virginia and attended the Iowa Writer’s Workshop, where she was a Teaching-Writing Fellow. Ms. Szybist is now associate professor of English at Lewis & Clark College in Portland, Ore., and a faculty member at the Warren Wilson College M.F.A. Program for Writers. She also has taught at Kenyon College, the University of Iowa, the Tennessee Governor’s School for Humanities, the University of Virginia’s Young Writers’ Workshop and West High School in Iowa City.

Ms. Syzbist is the recipient of the 2013 National Book Award for Poetry from her work Incarnadine (Graywolf Press, 2013). Her collection Granted (Alice James Books, 2003) won the 2003 Beatrice Hawley Award from Alice James Books and the 2004 Great Lakes Colleges Association New Writers Award, and was a finalist for the 2004 National Book Critics Circle Award in Poetry.

In addition, Ms. Szybist has been awarded a National Endowment for the Arts Literature Fellowship, a Witter Bynner Fellowship, the Great Lakes Colleges Association New Writers Award, the Rona Jaffe Foundation Writing Award and the Academy of American Poets Prize.

The George W. Hunt, S.J., Prize for Excellence in Journalism, Arts & Letters, was established in 2014 to honor the memory of George W. Hunt, S.J., the longest-serving editor in chief of America magazine, and to promote scholarship, the advancement of learning and the rigor of thoughtful, religious expression; to support and promote a new generation of journalists, authors and scholars; and to support the intellectual formation, artistic innovation and civic involvement of young writers. Previous recipients of the Hunt Prize include: Dr. Philip J. Metres III, of John Carroll University;Elizabeth Dias, of The New York Times; Liam R. Callanan, of the University of Milwaukee-Wisconsin; and Philip Klay, of The American Scholar.

Saint Thomas More: The Catholic Chapel & Center at Yale University serves the Catholic community at Yale by creating a vibrant and welcoming community through worship and service; cultivating informed faith and spirituality; engaging in reflective discourse on faith and culture; advancing the church’s mission of promoting social justice; and participating in the global Church’s life and witness.