From Inside to Out

The Other Side of the Altarby By Paul E. DinterFarrar, Straus & Giroux. 240p $23 (paperback original).

Those of us who knew Paul Dinter as the Catholic chaplain at Columbia University in the 1970’s and 80’s were presented with a personable, intellectually rigorous and obviously virtuous priest in a crisp Roman collar and well-tailored black suit. It was not that he was an unblinking spear-carrier for all things Catholic, but he seemed a loyal son of the church. Little did we know the storms that he had experienced en route to ordination and the tempest that continued to toss him about.

Although the Second Vatican Council had ushered in his priesthood, underway as he entered the seminary Dinter was still supposed to fulfill that classic, priestly profileat once superhuman, in that God himself awaited his summoning to swoop down into the ovals of unleavened bread, and yet unhuman when confronted with that most basic instinct. Sex? Fuggedaboudit. As for basic humanity, that was hardly part of the equation at the time. An imperfect self was to be left behind so that a higher good and calling might be pursued in the ordained life.

In this searing, unblinking and perceptive look behind the shroud that once clouded our view of the priesthood, Dinter provides an achingly human and ultimately transcendent portrait of what the formation was like, how priests were at once revered (and sometimes tempted) by their flock, meanwhile being treated as little more than serfs by their ecclesiastical superiors.

Now a husband and a father of another sort, and director of an outreach program called Care for the Homeless in New York City, Dinter has written perhaps the most telling and useful book of this hinge generation of priests, the last of those who came so blithely to their calling only to encounter a world and laity radically changing, and yet a church whose hierarchical structures remained firmly rooted in principles of medieval autocracy.

During his student days at the Archdiocese of New York’s St. Joseph Seminary, Dinter was more than willing to be included in a group of men immolating themselves for Christ, accepting a bloodless yet certainly heroic white martyrdom. They were disciplined to need neither to communicate nor to commune with others, a training that would follow them to their lonely rectories and, sadly, shape some of them into misanthropes whose typical subterfuges have been booze, boys or the boob tube.

But as the years wore on, the supposed purification of life never quite happened, as Dinter encountered what too many priests describe as the discouraging reality of clerical life. The author ponders, In the life of diocesan priests, celibacy is supposed to be a lifelong integrative strategy, but too often, the longer it goes on, the less there is to integrate. It was not that the work itself was the issue. It was everything else, especially interaction with those appointed to care for the priest’s well-being and fulfillment.

One particularly chilling incident occurred when Dinter invited Cardinal John J. O’Connor to deliver an interfaith address at Columbia. The cardinal graciously registered his pleasure at being with brother and sister clergy, and then, turning to Dinter, added but I was especially pleased to see Father Paul Dinter (pregnant pause) because he’s the only one I can fire. According to Dinter, it was O’Connor’s propensity to demean, but the words were followed by reality. And soon after, a very successfulbut obviously too thoughtfulcampus minister was out of that job, not assigned to another and virtually left turning in the wind.

By this time, his priesthood had simply become untenable. He experienced profound sadness pronouncing the final blessing at weddings. He was called upon to uphold the clerical state, which he had discovered placed loyalty to the corps over honesty, candor or integrity. He was no longer proud to be a priest.

In his first, tentative steps into the secular world, he found more honesty in a men’s group than he had found among fellow priests. Too many priests became gents used to public attention they had coveted but not earned, ready with a smile, joke and always open to a round of golf, but who never entered people’s lives, including their own. Or they became bitter, dry recluses merely going through the motions.

Of course, Dinter knows, as do we all, fabulous priests who go about their daily work in a happy, holy and wholesome manner. We don’t see enough of them on these pages, but then that is not the purpose of the book. Rather it is to take vital signs of the priesthood as now constituted and administered and to pronounce a patient in need of healing.

This article also appeared in print, under the headline “From Inside to Out,” in the April 7, 2003, issue. 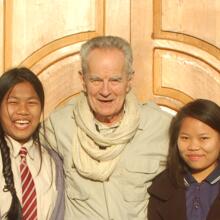 Paul WilkesPaul Wilkes, a writer, is founder and project director of the Pastoral Summit, an initiative to promote local church excellence.