Faith in a New Shape

In a 1993 essay, David Foster Wallace suggested a turn away from the irony that had come to characterize his generation of American writers: “The next real literary ‘rebels’ in this country might well emerge as some weird bunch of anti-rebels, born oglers who dare somehow to back away from ironic watching, who have the childish gall actually to endorse and instantiate single-entendre principles.” With a few exceptions, Wallace’s hope has yet to materialize.

Perhaps this is why the books that have taken the U.S. literary scene by storm are a Norwegian writer’s chronicle of his everyday life, a six-volume memoir in the guise of a novel that runs to over 5,000 pages and is provocatively titled Min Kamp.

Karl Ove Knausgaard is part of what the Swedish critic Victor Malm has dubbed the “Norwegian New Sincerity,” a stable of writers characterized by “a retreat to the intimate, the unadorned, and the naked.” Knausgaard has become the movement’s scion, both at home and abroad. At this summer’s book release party for the English translation of Book Three: Boyhood, a line of 500 people wrapped around a block in New York.

“A life is simple to understand, the elements that determine it are few,” he writes in the second volume of My Struggle, the English translation for the series. “In mine there were two. My father and the fact that I had never belonged anywhere.” But these elements are less organizing principles than forces affecting the volumes’ progress. The books progress like a moon, spinning in an orbit around two objects—his father and a sense of restlessness—which are often glimpsed but whose gravity is always felt.

Volume one of My Struggle begins with a grand meditation on what happens to a body in death and then seamlessly transitions into a childhood memory in which the young Karl Ove is watching the TV news report on a lost fishing boat. In the footage of a choppy sea, he glimpses the outline of a face and runs off to tell his father, who mocks him. The scene sets the tone of a house dominated by his father’s moods, a relationship dominated by his father’s antagonism and a book that is largely concerned with death.

The first part consists of a wandering through detailed memories of his teenage years, when his family began to fall apart and his father began the slow slide into the alcoholism that would eventually kill him. But his father does not actually die until part two of the book, which takes place when Knausgaard is 30 and chronicles his return to his grandmother’s house, where his father spent his final months drinking himself to death. Knausgaard finds a formerly well-ordered house strewn with bottles and human excrement, his grandmother herself now an alcoholic. He sets about cleaning the place, ostensibly so the funeral can be held there, but really it is an attempt to erase his father’s destruction. One hundred pages chronicling the deep cleaning of a house sounds a taxing proposition, and yet it is effortless reading.

This endless dedication to minutiae is equally present in volume two, A Man in Love, but the setting, and the man, have changed. The book opens with a picture of fatherhood: the writer and his wife on holiday, catering to their three young children at a cheap fair. The rest of the book’s 500-odd pages might be seen as an attempt to explain to himself how he arrived at such a domesticated point. He reccounts his move from Norway to Sweden, a flight from a country and marriage he says were suffocating him, his falling violently in love with a new woman and the birth of their children. But the specifics of what he fled from remain blurry. The presence of both his father and his ex are forcefully felt, though they are nearly absent from the book.

With Book Three, his father is back in focus. He had received a job teaching middle school in the countryside, and the young family had moved to a new, planned estate on the coast of Norway that had been developed for the burgeoning middle class in a country in the early stages of transitioning from a relatively poor country of fishing and farming to a nation bloated with oil money. Everything seemed new and modern. “And for those of us who were children, that meant no history. Everything was happening for the first time.” The book, the most linear of the first three, reads as an account of the early years of a New Norway, a family, and a boy who is both sensitive and precocious.

Like most boys, Karl Ove is also a bit mischievous, which makes for amusing reading; he writes about looking for porn magazines in the local dump or accidentally setting fire to a small island. But the levity is continually broken by the specter of his father, of whose presence Karl Ove is always aware. In one instance, his father force-feeds apples to him until he cries—all because he ate an apple from the kitchen without asking permission. In another, his father slaps him for losing a sock at swimming lessons and forbids him from going back to the pool. Knausgaard’s mother, an absent-minded, cheerful woman who works as a nurse, exists mostly in the background.

She saved me because if she hadn’t been there I would have grown up alone with Dad and sooner or later I would have taken my life, one way or another. But she was there, Dad’s darkness had a counterbalance, I am alive and the fact that I do not live my life to the full has nothing to do with the balance of my childhood. I am alive, I have my own children, and with them I have tried to achieve only one aim: that they shouldn’t be afraid of their father.

In a small country like Norway, where everyone knows somebody who knows somebody, the confessional style of Book Three is not a bloodless proposition. His father’s family no longer speaks to him. But the rigorous earnestness and honesty seems less courageous than compulsive, the act of someone possessed by graphomania. However, Knausgaard is doing more than navel-gazing or trying to come to grips with his childhood. At the reading in New York, he had this to say about his project:

There are some basic ideas about life that were dominating before. The idea of God, for instance. The idea of faith. The Divine. All those things that have just disappeared. Is it coming back in some other shapes? That’s what interests me, really. Is it still possible to talk about faith? What is it for us? And I can’t do this as a kind of abstraction. So what I do, I write about what I see and hope that there is something in there, there is some connection.

What could be characterized as self-absorption is in fact something more: a search for the religious through the aesthetic. In looking for the mystical, Knausgaard turns to his memories and everyday experience, which he mines ceaselessly and laboriously in his art. This technique is not without drawbacks, namely ocassional boredom. But with My Struggle: Book Three: Boyhood, one reads not to find out what happens but because one has come into contact with a man in the grip of genius. A difficult man who possesses the courage, the attention, and the capacity of spirit to look very long and hard at his life and the world around him and describe it in prose that eschews irony and distance. For readers, this is a welcome if demanding gift.

This article also appeared in print, under the headline “Faith in a New Shape,” in the March 9, 2015, issue. 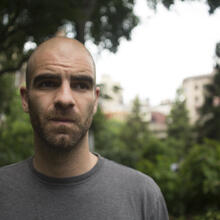