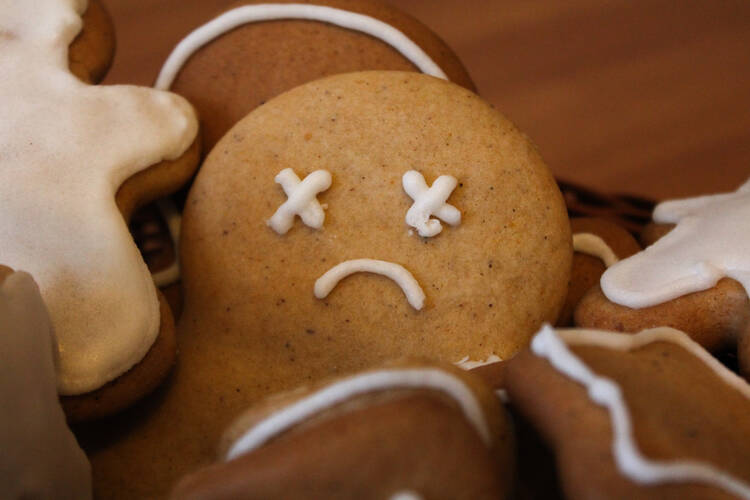 This Christmas, I spent a week with my family in Chicago. It seemed like an important year to be home. Finally things were going to go back to normal: No more isolating or racing around town looking for Covid tests. At last, we could all just spend time together.

Two days after I arrived at my parents’ house, the Wi-Fi went out as a result of a winter storm, and it remained out for three days. But after the first day we barely noticed, because we were too busy dealing with the brackish, tarry water that came up through the floor drains in my parents’ basement. There was some kind of block in our pipes, and as a result my parents ended up being unable to use the water in their house for almost five days, Christmas included. I moved into a hotel; my sister and her family, visiting from Appleton, Wisc., had to split up and stay with cousins and aunts and uncles, in whose houses we spent Christmas instead of at home. And in order to shower, wash dishes or use the bathroom, my parents had to drive to my aunt and uncle’s house.

If all of that is not sitcom-Christmas-worthy enough for you, the same day our basement took on water, my aunt and uncle had to put down their beloved dog Bentley. My mom and dad had enlarged a photo of him as a Christmas gift for them. Suffice to say, when my aunt and uncle saw it, they were speechless.

And on Christmas Day, my niece got a call from her landlord in Milwaukee, letting her know that the resident in the apartment next door left his window open before he went home for the holidays, and a pipe had burst, destroying pretty much everything in her apartment.

More religiously minded people might also try to draw these experiences back to the story of the Holy Family, who found themselves with only a barn to stay in as Mary gave birth.

When I returned home I was telling friends about all this, thinking it was pretty much the most outlandish Christmas possible. But many of them had equally horrible stories, some closely parallel to mine. Strong winds took out the power in one friend’s neighborhood in New Jersey for the entire Christmas holiday. In Nashville, the temperatures dropped 50 degrees in one day, freezing pipes all over the city and forcing people to buy huge jugs of water to use for washing and cooking. In Buffalo, the ongoing snowpocalypse was so bad that one priest had to not only cancel Christmas Masses but evacuate his rectory. He ended up spending Christmas Eve on the fire department’s boat.

And we all know about the massive amount of people who have had their holidays ruined by Southwest Airlines, which still continues to cancel thousands of flights. One of my friends, trapped for days in the Midwest waiting to get home, just got an automatic message from Southwest reminding him that it is the holidays, so it is important to get to the airport early. Somehow he had the self-control not to smash his phone. Another friend who had her flight canceled has pretty much re-lived the plot of the film “Planes, Trains & Automobiles,” and still isn’t sure when she is going to make it home.

Considering how much these stories have to do with weather events, there’s clearly a tale to be told here about climate change. More religiously minded people might also try to draw these experiences back to the story of the Holy Family, who found themselves with only a barn to stay in as Mary gave birth.

When things go so categorically wrong, it’s like a veil is pulled away, and we discover that the reality we thought we were living is a sham.

But I just find myself wondering: What the heck, God? Forgive me for sounding like the Israelites in the desert, but we did three years of isolation and anxiety for this? What comes next year, a continental plague of head lice? Our internet overrun by AI that refuses to let us watch or listen to anything but that one desperately sad Sarah McLachlan Christmas album? A heat wave so powerful that everyone across the United States is forced to have barbecues and hang around in shorts and a T-shirt like the Australians do? (Shh, if we complain enough we may be able to fool God into thinking that’s a punishment.)

When things go so categorically wrong, it’s like a veil is pulled away, and we discover that the reality we thought we were living is a sham. No matter how careful we are, how secure or healthy, pretty much anything can happen at any time, and we just have to deal with it. As substantial and stable as our lives might seem, at the end of the day we are all just tiny creatures barely holding onto a speck of rock that is hurtling through the infinite darkness of space. (Merry Christmas!)

I could add a paragraph here about how God walks with us in the midst of that, how these days in particular we remember that the Lord loved us so much that he chose to become one of us right down to our horrible frailty. And these things are true. But sometimes saying true and nice-sounding things like that becomes another way of avoiding the hard truths of a moment like this. God is with us, yes. God loves us, sure. But after a holiday of flooding drains, frozen power lines, departed family members, horrible neighbors and worse airlines, the only thing I’m really aware of is that I have a lot less control over my existence than I would like.

Maybe this marks the start of my supervillain era. (I’m so ready for a cape and long-winded exposition.) Or maybe it’ll make me more Zen. But in the moment it’s pretty frustrating.

And for some reason I keep thinking about this line from Ezekiel 36, in which God makes a promise to Israel. “I will remove from your body the heart of stone, and give you a heart of flesh.” A heart of flesh definitely sounds better than one made out of rock. But it hurts a lot more, too.