Ending where I began: After 10 years as editor in chief, Matt Malone’s last word 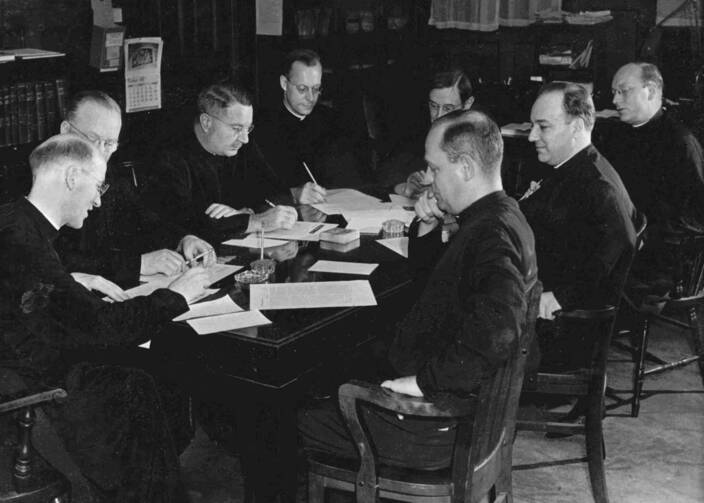 In the early morning of a late winter day in 1909, about a dozen people gathered at 32 Washington Square in New York City. This was the first meeting of America magazine. It was led by John Wynne, S.J., our founder and first editor in chief. “We have a mission,” he said: “To create a magazine that will give Catholics a voice in the public discourse of this country; to promote the evangelization of the United States; to support the faith formation of American Catholics; to champion the progress of civil society.”

Father Wynne named his magazine America because, he told us, this work stands for two things above all: God and country. In retrospect, it is extraordinary that Father Wynne or any Catholic could have expressed such confidence in the American experiment at a time when this country was still so hostile toward their hopes. But while John Wynne was first and last a disciple of Jesus Christ, he was also a citizen, and a grateful one at that. He knew that this country had welcomed millions of Catholics, men and women who had left field and family and crossed land and sea in search of their future. Father Wynne named his magazine as he did because he wanted it to be a champion of America. Not a blind or uncritical loyalty, of course. You’ll not find that in our pages or in our archives. But you will find an unwavering confidence in the decency of the American people and in the nobility of the American experiment.

Through all the triumphs and tragedies of the church in its American pilgrimage, we kept the faith; we helped others to find their faith again.

For this reason, if America the magazine ever ceases to be a champion of America the country, then it will cease to be worthy of its name. You and I surely know what Father Wynne also knew: This country’s history is a complex mix of lights and shadows. It is far from perfect. But a fallen people cannot afford the luxury of making the perfect the enemy of the good. And the values of democracy, and freedom, and equality under law, the values that have guided the American people through our sojourn—whether those values were realized when spoken or were only aspirations we failed to realize—those values are also the universal principles that safeguard the God-given dignity of the human person.

God and country—in that order. For as much as John Wynne loved this country, he loved God and his church even more. In his vision, America magazine would not only champion the nation, but would, above all, support the earthly pilgrimage of American Catholics. America would be a spiritual as well as an intellectual resource. Of all of the things that the men and women of this ministry have accomplished during the last decade, this is the thing of which I am most proud: Through all the triumphs and tragedies of the church in its American pilgrimage, we kept the faith; we helped others to find their faith again. While producing news and analysis every day about the most important issues at the intersection of the church and the world, we told thousands of their stories. And there are millions more waiting to be told. So while my time as editor in chief now comes to an end, my colleagues are just getting started.

My friends: In the late morning of an early autumn day in 2012, about a dozen people gathered at 106 West 56th Street in New York City. This was the first meeting of America Media. If Father Wynne had been there that day, he would have recognized nothing except that which makes everything possible. For he would have seen in the men and women of this ministry the very same faith, hope and daring that he had seen in his colleagues more than a century earlier. In other words, he would have seen what I saw that day, what I have seen across this country in the more than 3,650 days that have followed: a reflection of the light who ultimately illumines our path; the light from light, who even now shines in the darkness and will never be overcome by it.

He is the reason why I now end where I began, with the very same words I spoke to my colleagues on that first day a decade ago; words I have often returned to, but which have a new meaning to me now: