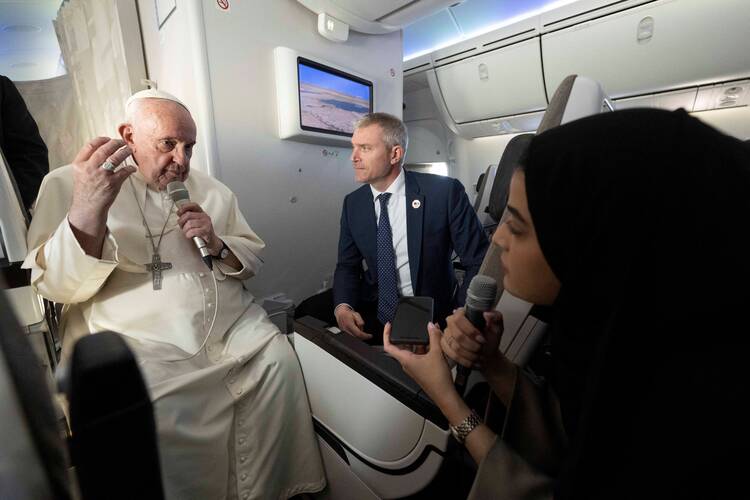 Pope Francis speaks with reporters on the flight back to Rome from Bahrain on Nov. 6, 2022. (CNS photo/Maurizio Brambatti pool via Reuters)

ABOARD THE PAPAL FLIGHT FROM BAHRAIN (CNS) -- A society that does not give women the same rights and opportunities as men will become impoverished, Pope Francis said at the end of a four-day visit to Bahrain.

"Women are a gift," he said. After God made man, he didn't create "a lapdog for him to play with. No, he created two who are equal, a man and a woman."

"All the rights of women stem from this equality," he said, and a society that is not able to make room for women "does not move forward."

The pope was speaking Nov. 6 to reporters in response to their questions after visiting the Muslim-majority nation of Bahrain in the Persian Gulf.

The aim of the trip, he said, was to experience moments of encounter and dialogue, with Muslims, Christians and Catholics. The majority of all residents are foreigners from many different countries, cultures and religions.

As a result of these moments of encounter and talks, he said, he learned something new, that this small nation boasts "a culture open to everyone" with "room for everyone," including women, who, for example, all have the right to work.

The pope was then asked about the protests in Iran, which were sparked by young women and men fighting for more freedoms and reforms in the Shiite-led country, and whether he supported their efforts of demanding fundamental human rights.

He said, "The fight for rights for women is an ongoing battle because, in some places, women have achieved rights equal to men" and, elsewhere, they lag behind.

It was also not that long ago, he added, that women had to fight for the right to vote in his home country of Argentina, and women in the United States also had to battle for their right to vote.

"But why, I ask, do women have to fight like this to keep her rights?" he said.

Another violation that must be stopped, he said, is female genital mutilation. "How is it that in the world today we cannot stop" this practice? "It is a crime, a criminal act."

The pope asked, "Are women objects to use and throwaway? This is terrible, right? Or are they a protected species?"

Instead it is a question of equality, which still has not been universally achieved, he said. Unfortunately, in some places, women are still considered and treated as "second-class" citizens or worse, and "we have to keep fighting this."

The fight for rights for women is an ongoing battle.

Women are not inferior, "they are complementary," he said, and this also means women should be bringing their own unique gifts and talent and must not try to be like men. Pope Francis said that "both ways must work together: The woman, equal to the man, works for the common good with that insight that women have. I have seen that in the Vatican, every time a woman comes in to do a job in the Vatican, things get better."

There is still a long way to go, he said, because there is so much chauvinism, which "kills humanity."

The pope was asked whether the church was considering a change in the way it handles known perpetrators of abuse and those found guilty of its cover-up, specifically by making public those who have been sanctioned by the church when found guilty.

The pope did not address the question of providing greater transparency, but he said, "We are working in every way we can."

"But we well know that there are people in the church who do not see things clearly, who do not agree," so it is "a process" that requires courage, he added.

"The desire of the church is to clarify everything. For example, I received in the last few months two complaints of abuse that were covered up and the church did not handle it properly, so immediately I said to look into it again" and it will be re-investigated. So there will be a revisiting of judgments that were not handled well, he said.

This article includes additional quotes from the Vatican News transcript of the interview.