Should the U.S. be a ‘Christian nation’? White and Hispanic Catholics disagree on the answer. 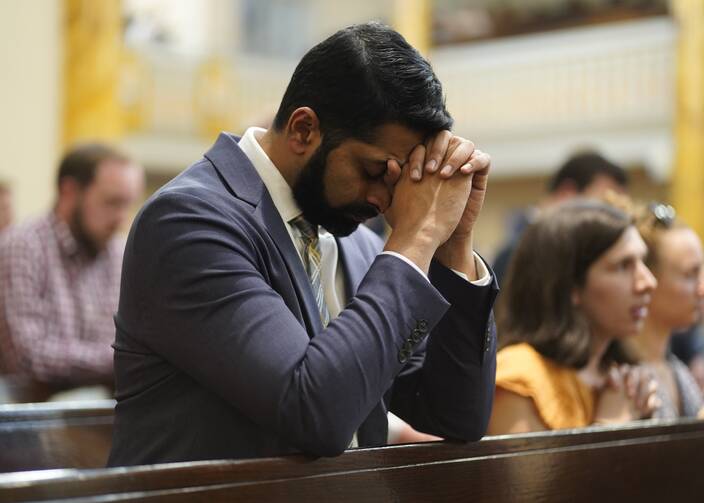 New data offers insight into the beliefs of U.S. Catholics ahead of the midterm elections, with differences among white and Hispanic Catholics when it comes to how they view the role of Christianity in the United States and what they view as essential elements of their faith.

New data offers insight into the beliefs of U.S. Catholics ahead of the midterm elections, with differences among white and Hispanic Catholics.

But the report found that “Americans express widely varying ideas of what being a Christian nation means,” including “general guidance of Christian beliefs and values in society” and “being guided by beliefs and values, but without specifically referencing God or Christian concepts.”

Following the decision by the Supreme Court to overturn Roe vs. Wade earlier this year, a greater percentage of Americans believe the court is “friendly” toward religion compared with three years ago, rising to 35 percent from 18 percent in 2019. Catholics have also shifted in their view of the court, with 30 percent of Catholics saying the court is friendly to religion, compared with 13 percent three years ago.

78 percent of white Catholics said “living a moral life” is essential to their Christian faith, a view shared by 69 percent of Hispanic Catholics.

When it comes to the Biden administration, white Catholics view the White House as being “unfriendly” toward religion at higher rates (37 percent) than Hispanic Catholics (18 percent).

Asked if churches and religious organizations have “too much,” “about the right amount” or “not enough” influence in politics, a plurality of Americans (42 percent) said “too much.” But nearly half of white Catholics (48 percent) chose “about the right amount,” a view shared by 44 percent of Hispanic Catholics. (Nearly half of white evangelical Protestants, or 45 percent, said religion does not have enough influence in politics.)

The survey also asked respondents, “Thinking about the way things have been going in politics over the last few years on the issues that matter to you, would you say your side has been winning more often than losing or losing more often than winning?”

Majorities of all groups feel that “their side” on political issues has been “losing” more often than “winning.” Among all U.S. adults, 72 percent say that their side is losing more than it is winning, a view shared by 76 percent of white Catholics, 64 percent of Hispanic Catholics and 74 percent of those who are religiously unaffiliated.

As churches across the country continue to struggle with attendance following Covid-19 safety precautions, the survey found that fewer than half of both white Catholics (24 percent) and Hispanic Catholics (36 percent) believe that attending religious services regularly is essential to their faith.

Correction (Oct. 28): A previous version of this article included an incorrect figure for the percentage of Hispanic Catholics who believe religion's influence in public life is declining. The correct number is 67 percent. The article was also updated to correct an incorrect figure about the percentage of Catholics who in 2019 said the Supreme Court was friendly to religion. The correct number is 13 percent.