Remembering Father Albert Nolan, a best-selling theologian who explored the humanity of Christ 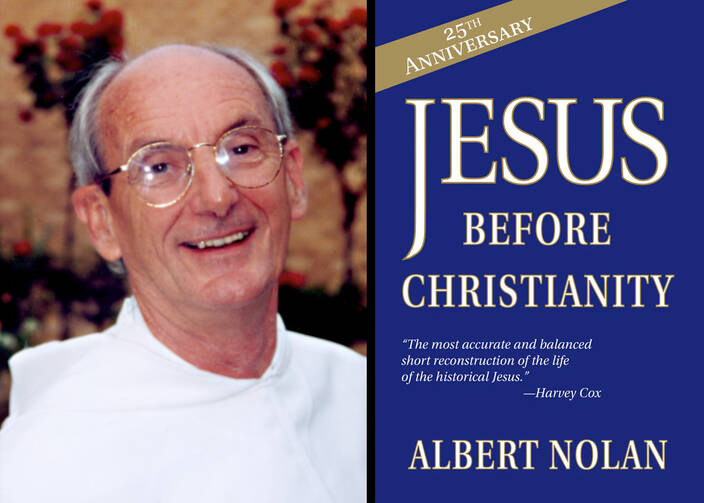 Within a few hours of learning of the death of Albert Nolan, O.P., I was in conversation about him with Dominican friends, fellow Jesuits and one formerly high-ranking member of the South African Communist Party, who recalled how Father Nolan helped him better understand Christianity and what faith might mean.

Those who knew Albert, as his friends and confrères called him, should not be surprised.

Father Nolan, who died in the early hours of Oct. 17, was a remarkable figure in the South African Catholic Church. A world-renowned, even bestselling, theologian and an activist against apartheid, he was a humble, easygoing person—until he started to preach or lecture.

Father Nolan sought during his tenure to help white Catholic students find a way of working with their Black colleagues for the common goal of ending apartheid.

Born in Cape Town in 1934 in a lower middle-class family of Irish extraction, young Dennis Nolan worked as a bank clerk after finishing school until he joined the Order of Preachers in 1954. Taking the name Albert, he completed his studies for the priesthood at St. Nicholas Priory in Stellenbosch, near Cape Town, before completing doctoral studies at the Pontifical University of Saint Thomas Aquinas, the Angelicum, in Rome.

Because he considered the cost of publishing his thesis a waste of money, the degree was never conferred. Undeterred, he returned to South Africa to teach theology at the Dominican house of studies from which he had graduated. He combined his teaching with serving as chaplain to Catholic students at the overwhelmingly white and Afrikaans-speaking Stellenbosch University.

He would also in the 1970s onward serve as a chaplain and advisor to the Young Christian Students and Young Christian Workers. His reputation as a preacher grew. Occasionally he even had opportunities to preach on national radio.

Father Nolan’s responsibilities as chaplain broadened in 1973 when he was made National Chaplain of the National Catholic Federation of Students, at a time when even liberal-minded student movements were in ferment generated by the rise of the Black Consciousness movement. Started in 1969 by the late Steve Biko, the movement encouraged black pride and self-reliance, with a view to political liberation.

This movement split numerous student groups, including N.C.F.S., when Black students—a minority in the country’s university system, but the majority of South Africans—felt they had no real voice even in progressive but predominantly white organizations. Father Nolan, who was familiar by that stage with the Black Consciousness movement, sought during his tenure to help white Catholic students find a way of working with their Black colleagues for the common goal of ending apartheid.

Albert challenged through his writings and his life a whole generation of Catholic students and young Catholic men and women religious of many orders.

His specific contribution at this stage was theological. Prompted by a meeting in the mid-1970s with liberation theologian Gustavo Gutierrez (who would himself later become a Dominican), Father Nolan gave a series of lectures on the historical Jesus to two N.C.F.S. national conferences, which he later turned into a book published in 1976 as Jesus Before Christianity.

After a small print run from a local publisher, the book was picked up by theological publishers in the United Kingdom and United States. It became one of the bestselling theological texts of the last 100 years and is still in print.

A synthesis of modern Anglo-German Christology and liberation theology, it presented a focus on the human, activist Jesus of Nazareth. It has been a textbook in many Catholic and Protestant theology faculties, including Harvard Divinity School, since. James Martin, S.J., editor at large for America Media, recalls reading it in his novitiate. He said it helped him see the truly human side of Jesus. Generations of Catholic and Protestant students in South Africa,who were dealing with how to reconcile faith and political commitment, read this seminal work.

I too read it in 1986, aged 20, while involved with N.C.F.S. and working through the possibility of a vocation. I subsequently met Father Nolan, who became almost immediately “Albert,” a mentor and friend.

By the early 1980s, Father Nolan was provincial of the Dominicans in Southern Africa, which necessitated a move to Johannesburg. While in Johannesburg, he helped to found the Institute for Contextual Theology, an ecumenical network of pastors and theologians engaged in the struggle against apartheid. This brought together white and Black university professors and clergy in South Africa’s townships who had embraced Black Consciousness (which had been suppressed as a movement in 1977).

As a group, they developed Contextual Theology—a synthesis of Black and Liberation Theology. Politically the climate of resistance had shifted. The exiled African National Congress was gaining a new public voice. Internally, new civil organizations and trade unions broadly sympathetic to the principles of non-racialism and social democracy of the A.N.C. were emerging. The institute became a theological voice of this social evolution in the church.

Jesus Before Christianity became one of the bestselling theological texts of the last 100 years.

Midway through all this, in 1983 Father Nolan was elected master general of the Order of Preachers. In an unprecedented move in Dominican history, he politely turned down the appointment, believing that his work in South Africa would serve the Gospel more.

Returning to South Africa, in the decade of apartheid’s endgame, Father Nolan threw himself into his work. Crucial to this period was his involvement in drafting and editing the 1985 Kairos Document, a call from pastors and theologians to the churches of South Africa to fully embrace the struggle for democracy and to put their institutions at the service of nonviolent resistance. Although the institutions responded uneasily to Kairos, criticizing (perhaps correctly) the representation of themselves in the text, by the end of the 1980s the churches in fact took a leading role in nonviolent action.

Meanwhile within the Catholic Church, though he was controversial, Father Nolan was a major resource for the Southern African Justice and Peace Commission, advising the bishops on public statements and even at one point visiting and reporting on the state of the church in Communist countries. (The report has never been published!)

During the State of Emergency, 1985 through February 1990, in South Africa—the beginning of the end for apartheid—Father Nolan’s life took further dramatic turns. For a while, he was in hiding, hunted by the security police who wanted to detain him without trial for his work on the Kairos document.

Father Nolan saw an opportunity and wrote his second major book, God in South Africa, literally on the run. It was published in 1988. This work, in many ways his most radical, analyzed the South African situation from a perspective very close to the A.N.C.’s understanding and argued that hope lay in the very struggle for freedom that the A.N.C. and other internal resistance moments committed to non-racial democracy were waging.

As South Africa moved towards democracy in the 1990s, Father Nolan, perceiving that the hope created by the 1994 election could easily be dashed by government corruption and a too-easy acceptance of unbridled neoliberal capitalism, edited a radical ecumenical Christian journal, Challenge. In between his Dominican duties—he served three terms as provincial as well as becoming novice master—Father Nolan continued writing and speaking. The fruits of this were two more books, Jesus Today: A Spirituality of Radical Freedom in 2006 and Hope in an Age of Despair: And Other Talks and Writings in 2009.

Father Nolan has been both honored and vilified. Because of his reputation as a liberation theologian, his award of an honorary doctorate from Fribourg University was blocked in 1990, but Regis College, University of Toronto, went ahead and awarded him one in the same year. In 2003, President Thabo Mbeki awarded him the Order of Luthuli in silver for his contribution to the struggle for human rights and dignity.

He was in the first group to receive this award that honored not only political figures, but other South Africans whose social, cultural or intellectual lives promoted the values espoused by the new democracy. And in 2008, Dominican Master General Carlos Aspiroz, O.P., conferred on him the order’s master of theology.

The list of achievements in Father Nolan’s life is considerable, but in many ways, Albert Nolan would have been the first one to shy away from such honors. He was genuinely humble. He turned down university posts in South Africa and elsewhere. I know, for example, that in the 1980s the University of Cape Town wanted him to be professor of Catholic Studies in their Religious Studies Department. Not bad for someone who officially never got his Ph.D.

I recall too once begging him to write his memoirs, a request asked of him by many Dominicans too. He smiled humbly and suggested that might be the work of someone else. On occasions when I’ve visited him, I found him sitting with the young friars, just one of the group—a very Dominican Dominican.

For those of us who are not Dominicans, Albert’s witness too was considerable. Albert challenged through his writings and his life a whole generation of Catholic students and young Catholic men and women religious of many orders.

I mentioned, earlier, his Communist friend. That was not unusual, certainly not in the dramatic 1970s and 1980s where religious beliefs and political ideologies blurred around what side you took in South Africa. This was the good side to bad times. Albert would say that this was a present-day expression of Jesus’ “kingdom/reign of God” and a sign of hope.

May his memory inspire us all to hope and struggle onwards in new times for that reign.

Correction:This article has been updated to clarify that although he was elected master general of the Order of Preachers in 1983, Father Nolan declined to serve in that role, owing to his desire to remain in South Africa at that time.