Why don’t Catholics receive the precious blood from separate cups at Communion? 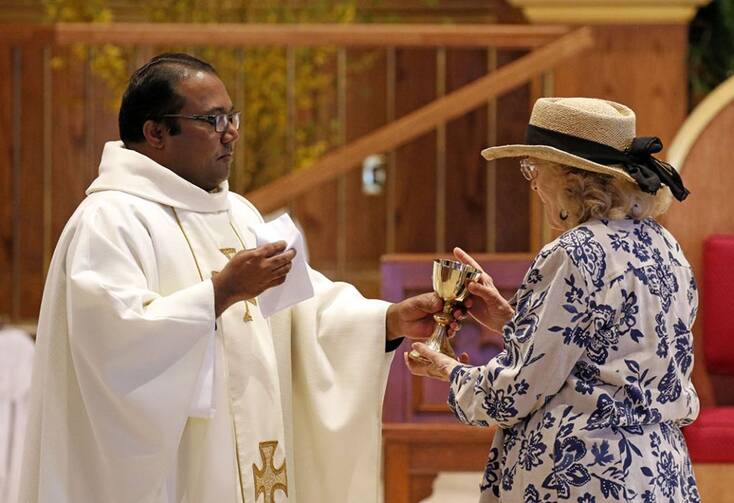 The Rev. Chinthaka Perera gives the Communion chailce to a woman during Mass at St. Boniface Martyr Church in Sea Cliff, New York, on April 25, 2019. (CNS/Gregory A. Shemitz)

When the Spanish flu was sweeping across the globe in 1918, many churches adopted a new practice for the distribution of Communion. Instead of having communicants drink from the same chalice, a number of churches (beginning with the Church of Jesus Christ of Latter-day Saints) began to present a great number of small cups—almost like shot glasses—filled with wine for members of the congregation to drink from individually.

At the time, this was less of an issue for Roman Catholics, because until the reforms of the Second Vatican Council only priests customarily received from the chalice. Now, just over a century later, some Catholics are suggesting that our churches make a similar change due to the current pandemic. The precious blood is an important part of Communion, but many people are afraid of the risk of cross-contamination from a shared chalice. Why shouldn’t we simply use separate cups?

The first major issue with using multiple cups for Communion is that the church is loath to use disposable or mass-produced containers for the Eucharist.

The idea is unlikely to be implemented—and not just because our church is notoriously averse to change. There are major doctrinal impediments to such a reform in the reception of Communion. Furthermore, even if we could work around those obstacles, the theology of the one cup is an indispensable element of the symbolism of Communion.

The first major issue with using multiple cups for Communion is that the church is loath to use disposable or mass-produced containers for the Eucharist. The 2004 instruction from the Vatican’s Congregation for Divine Worship and the Discipline of the Sacraments, “Redemptionis Sacramentum,” makes this explicit: “Reprobated … is any practice of using for the celebration of Mass common vessels, or others lacking in quality, or devoid of all artistic merit or which are mere containers, as also other vessels made from glass, earthenware, clay, or other materials that break easily” (No. 117). One can imagine how the authors of this instruction would shudder at the thought of plastic cups being tossed in a trash can after each communicant drinks.

The same document forbids pouring the precious blood from one container into another, “lest anything should happen that would be to the detriment of so great a mystery” (No. 106). It is for this reason that a priest cannot consecrate the blood in a flagon or pitcher and then pour the liquid into separate chalices. Instead, every chalice must be filled with wine before the consecration.

Communion wine, furthermore, is not to be held in the tabernacle after consecration. Priests are instructed to consecrate all the wine that is to be used for a particular Mass at that Mass, and to consume all of the remainder themselves (No. 107).

Finally, Catholics cannot follow the practice of some Protestant churches of laying out the many cups on a table and allowing communicants to serve themselves the wine. Not only would this practice leave the Eucharist unattended (No. 138), but it would also go against the practice of receiving the Eucharist from another person (No. 94).

In fact, however, the use of additional eucharistic ministers allows for multiple chalices for Communion (No. 105). Then, after Communion, the priest would have to clean every one of the little chalices. (The personal prayer after Communion might last a while.)

But here we come to the real hangup. The use of individual chalices would run contrary to much of Christian theology surrounding the Eucharist.

“Jesus said, ‘take this cup,’ and they all drank from it, the gospels say. That is the tradition,” said the Rev. Dr. Maxwell Johnson, a professor of liturgical studies at the University of Notre Dame, in a phone interview with America. “Anything else is a departure from the classic Christian tradition.”

That Jesus would use one cup conveys great meaning, according to John Baldovin, S.J., a professor of historical and liturgical theology at the Boston College School of Theology and Ministry. “There is something extremely radical and challenging about Jesus sharing the cup with his disciples at the Last Supper. In fact, some scholars claim that this was an innovation, that in the Jewish practice there were a number of cups that were blessed at a Passover meal, and the Jews all drank from their own cups,” Father Baldovin told America in a phone interview. “For Jesus, however, it's quite clear that it is a sharing in the one cup because he passes it to the disciples.”

What is the meaning of Jesus’ choice? “In the gospels, drinking from the cup is a sign of courageous discipleship,” wrote Jim Dinn in U.S.Catholic in 2011. “‘Can you drink the cup that I will drink?’ Jesus challenges. In the Garden of Gethsemane the same image expresses the ordeal awaiting Jesus. Not surprisingly, then, Communion from the cup implied for the early Christians an openness to martyrdom, a willingness to lay down one’s life.”

“The common cup is a testimony to the scandal of sharing in Jesus, not only his person but his fate,” Father Baldovin explained.

In other words, the potential of contracting a disease is no reason at all to dispose of the common cup. It is, in a sense, one of the reasons that we share the cup in the first place.

The common cup is a symbol of community: sharing everything, even risk and suffering.

Sharing the cup “is an important sign of intimacy and connection with others who come to the table of the Lord,” wrote Michael Rozier, S.J. in America in 2021. “It evokes participation in Jesus’ suffering and resurrection.”

In Father Baldovin’s opinion, the desire to separate the precious blood into separate cups indicates that our society suffers from a weak sense of community. “In our culture, we're just so individualistic, we're so consumeristic. We think Communion is about taking something rather than participating in the whole Christ. [Separate cups] appeal to our modern individualism and our modern consumerism.”

Dr. Johnson agrees: “The Eucharist isn't just about the presence of Christ in the wine but also about the presence of Christ in each other.” An Episcopalian bishop, William E. Swing, Dr. Johnson mentioned, made an excellent example of this in 1985; during the height of the AIDS epidemic, he committed to drinking from the chalice after everybody in the community already had, “so that if anybody got sick, it would be him.”

This bishop showed us that the very fear that causes people to eschew the common cup is precisely what we are supposed to face and overcome by receiving it. Using separate cups seems like the neighborly thing to do. We have a desire to protect others from dangerous disease, but Christians should not need to be protected from one another. The common cup is a symbol of community: sharing everything, even risk and suffering. Jesus accepted his cup, taking the worst of humanity upon himself. We are called to do likewise.

Patricl Cullinan is a student at Fordham University and a former intern at America.