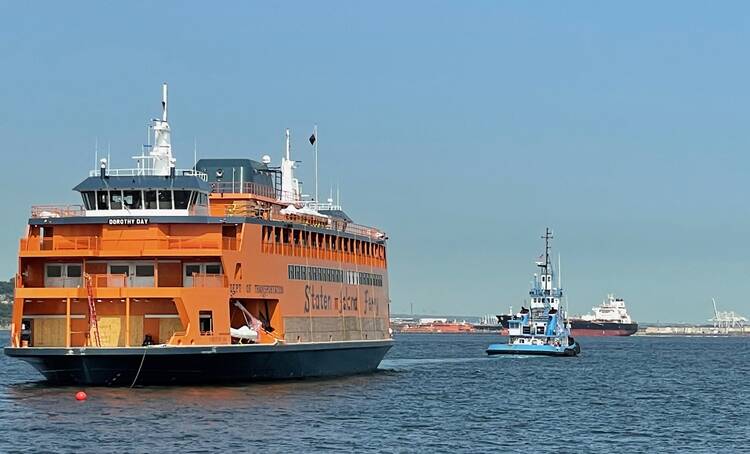 The latest addition to New York’s Staten Island Ferry fleet, the Dorothy Day, passed under the Verrazzano-Narrows Bridge on Sept. 16, delighting members of New York’s Catholic Worker community and supporters who had come out to welcome Dorothy back to New York. The new ferry boat was on its way to a mooring at Caddell Dry Dock and Repair on Staten Island, where testing and final work preparing the Dorothy Day for commuter service between Staten Island and Manhattan will continue over the next few weeks.

The new ferry should be ready for passenger service on the 125th celebration of Day’s birth, Nov. 8, according to Anthony Donovan, a longtime supporter of the Catholic Worker movement who called in a favor at McAllister Towing to arrange harbor transport for the ferry’s welcoming committee. Mr. Donovan’s cousin Bucky McAllister was kind enough to lend out the Ellen McAllister, a sturdy working tug, and her crew to take the delegation out to greet the vessel.

The new ferry should be ready for passenger service on the 125th celebration of Dorothy Day’s birth, Nov. 8.

“To me this is like a birthing. This is a beautiful, kind of a sacred day,” Mr. Donovan said as the tug approached the ferry, just then appearing on the horizon on a brilliant late summer morning in New York. “I know it’s all symbolic,” he said with a wry smile. “Dorothy is not a ship; Dorothy is in our hearts.” But today, he marveled as the ferry neared Staten Island for the first time, “her message is being carried into the tides of New York harbor.”

Dorothy Day famously never wanted to be called a saint; how might she have responded to the idea of having a Staten Island ferry named after her?

“If it helps awaken consciences and gives a platform for the poor and for an alternative way of life than what we’re living right now, I think she would be very proud and happy,” Deborah Sucich, a Catholic Worker who joined the group on the Ellen McAllister, said.

“Given her deep, deep love for Staten Island and wanting to build bridges between different boroughs in New York City, I think this connector [vessel]—especially since it’s free—would be something she would probably be very happy with,” Kevin Ahern said. Mr. Ahern is an associate professor of religious studies at Manhattan College, where a Dorothy Day Center for the Study of Social Catholicism is planned, and a member of the coordinating committee for the Dorothy Day Guild, which has been managing her canonization process. (Mr. Ahern is also a former board member of America.)

That effort is in a waiting mode, he said, with all materials supporting Day’s canonization delivered to Rome. The arrival of the new ferry, he said, offers a unique opportunity to bring her life to the public’s attention and “build momentum” toward her canonization.

“A key part of the process right now is raising awareness of Dorothy’s life and witness and encouraging people to pray for miracles and to report those miracles, so we can move further along on the process,” he said.

Dorothy Day famously never wanted to be called a saint; how might she have responded to the idea of having a Staten Island ferry named after her?

Ms. Sucich was happy to see Day remembered in this unique way. “I feel like she is one of our spiritual mothers and friends that are guiding us along this path,” she said. Ms. Sucich is among a group of Catholic Workers who hope to open a house of hospitality on Staten Island, where the movement has historic ties but has not had a presence in many years.

“Now with her canonization coming up, we feel that Staten Island—along with the rest of the world—is much in need of the Catholic Worker movement,” Ms. Sucich said.

Is the new ferry’s arrival a sign? Definitely, she said. In the coming months, she pointed out, in addition to celebrating Day’s 125th birthday, the Catholic Worker newspaper will reach its 90th year of publishing in New York.

“When they launch this boat, we have the perfect opportunity to educate Staten Islanders about Dorothy Day,” said Ms. Sucich. “That would be the least we could do for her cause and [the Catholic Worker] movement, and I’m hoping that the support will be so great that within a year or two we can open a house of hospitality on Staten Island.”

Though the Dorothy Day in the traditional orange and blue of the Staten Island ferry service will surely appear familiar to regulars of the daily crossing to Manhattan, her builders assure she is equipped with the latest technological and safety advances and built for comfort. The ferry includes an upper-deck promenade that will function as an outdoor walking track for exercise-minded commuters.

“Now with her canonization coming up, we feel that Staten Island—along with the rest of the world—is much in need of the Catholic Worker movement.”

According to the Eastern Shipbuilding Group, which built and launched the Dorothy Day from Panama City, Fla., the double-ended 4,500-passenger ferry includes “the latest in marine technology for energy efficiency and environmental friendliness.” The city’s experience on 9/11 contributed to the design—like two other ferries recently launched by Eastern, the Dorothy Day "can be connected to the New York fire vessels…to support evacuations and rescue.”

“It has been an honor for our company to build the three Ollis Class Staten Island Ferries for the citizens of New York City, marking a bold new chapter in the Staten Island Ferry’s 200-year-old legacy of public transportation,” Joey D’Isernia, president of Eastern Shipbuilding Group, said. “These cutting-edge ferries are now the premier vessels of the world’s busiest passenger-only ferry system that has reliably served the people of New York, New Jersey and the millions of tourists New York City welcomes each year.”

The ferry naming, which began as a petition campaign in 2016 submitted to the de Blasio administration, contributes to recent efforts in New York to find new ways to honor notable women and people from communities overlooked in the past. The same could be said for the church’s canonization process, Mr. Ahern pointed out. “Dorothy Day as a laywoman, as a New Yorker, as a mother—we need more voices like that, more experiences like that formally recognized as saints,” he said.

“My students are always looking for exemplars of great New Yorkers,” Mr. Ahern added. Noting her connections to Staten Island, where as a young mother she lived in a beach bungalow, “I can’t think of a better place to memorialize her legacy in the public space of New York City,” he said.

Mr. Ahern recalled Pope Francis’ warning that Catholics like Dorothy Day not be memorialized like “a mummy in a museum.” That is surely not true of the tribute paid to her memory by this “ginormous ferry,” he said. If this “piece of public art” could lead people “to hear about the Gospel in a new way, then there’s something miraculous there,” he said.

Watching the Dorothy Day approach, Mr. Donovan remembered his years supporting the Catholic Worker’s efforts against war-making and nuclear weapons manufacture. “Dorothy has always been inspiring me,” he said, lamenting the latest European conflict in Ukraine and the continuing scandal of war-making in a world full of need.

“It’s beautiful that we have Dorothy’s energy and her spirit and her wisdom entering the harbor at this really difficult time of another war rising and the real threat of a nuclear exchange,” he said. “Her words and her example are very prescient right now.”